Reducing NXP’s carbon footprint are initiatives that can make our world a better place. Regarding our operations, there are operational controls that we can make improvements to be a more responsible corporate citizen. Reducing our carbon footprint has been identified as a salient issue that our company can address and improve upon. We have company initiatives that focus on the effects of our operations and how it impacts the environment at large.

Semiconductor manufacturing is not considered a major contributor to global warming, but our operations do directly and indirectly emit greenhouse gases such as PFC’s and emissions from purchasing electricity. We measure, manage and report our Scope 1, 2 and some Scope 3 emissions. Emissions are reported in terms of tons of CO2 equivalents.

NXP’s 2020 goal is to reduce our normalized carbon footprint by 30% from a baseline year of 2010. In addition, NXP strives to aggressively reduce our “absolute” emissions, meaning a reduction regardless of the expended growth of production. Our production normalizer is based on the square meter of silicon wafers produced.

NXP aims to reduce our carbon footprint, through utility consumption conservation, process optimization, greenhouse gas replacement, point of use abatement projects, optimizing product transport and business travel. As part of this effort, our combined sites had multiple reduction projects such as: 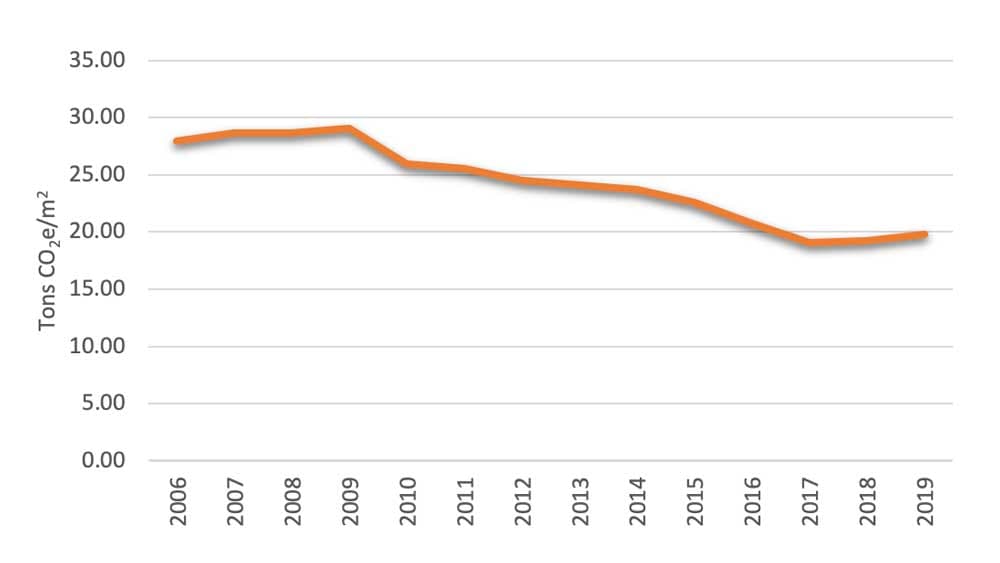 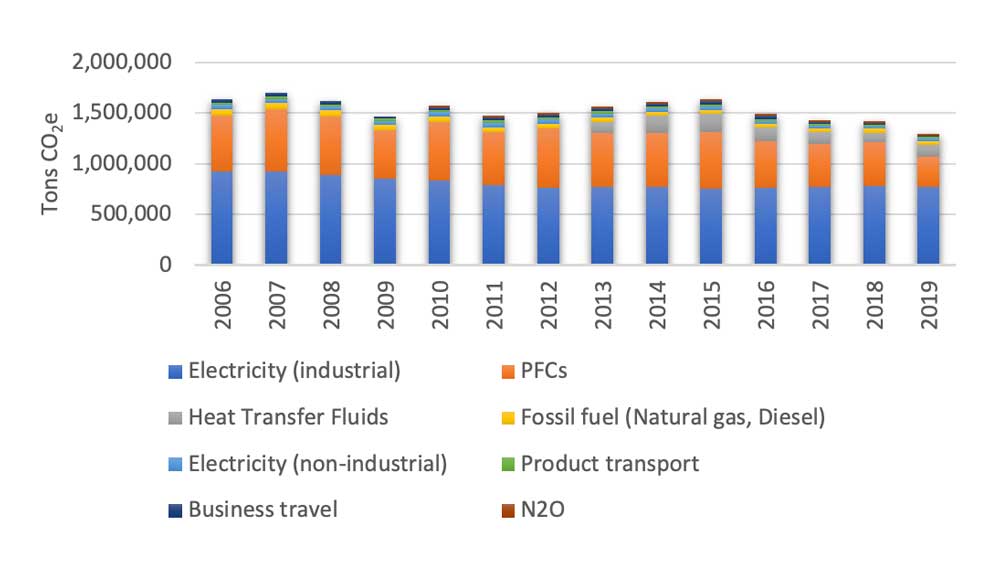 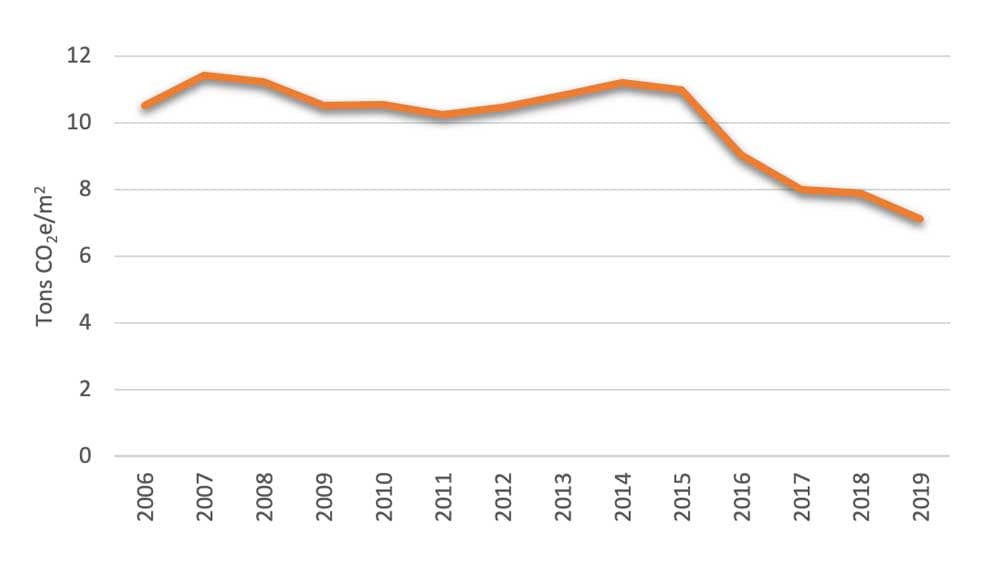 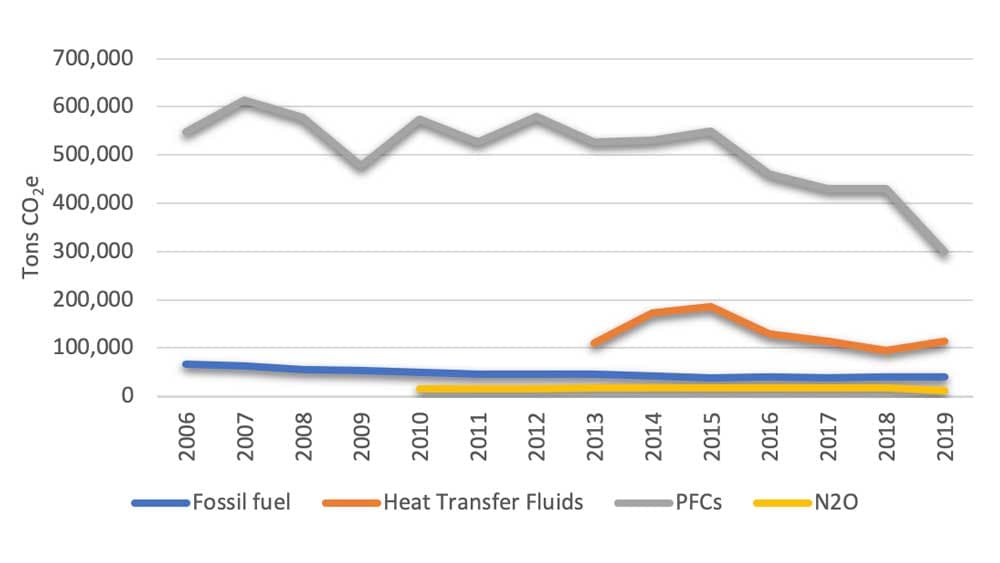 At NXP, the most commonly used fossil fuel is natural gas, used for heating and humidity control in our clean rooms. NXP’s use of natural gas depends strongly on both the external temperature and internal production activity within the manufacturing facilities. Diesel is also used at NXP for back-up generators.

The natural gas increase occurred at one site because they increased their square footage by 30%. Additionally, three sites purchased more natural gas due to the cyclic nature of climate changing year upon year for heating requirements. We report diesel based on the purchase record. Diesel is primarily used for our emergency generators (primarily consumed for testing purposes) and forklifts. The purchase of diesel is not distributed evenly throughout the years in which there was an increased shift of purchasing from 2018 to 2019. 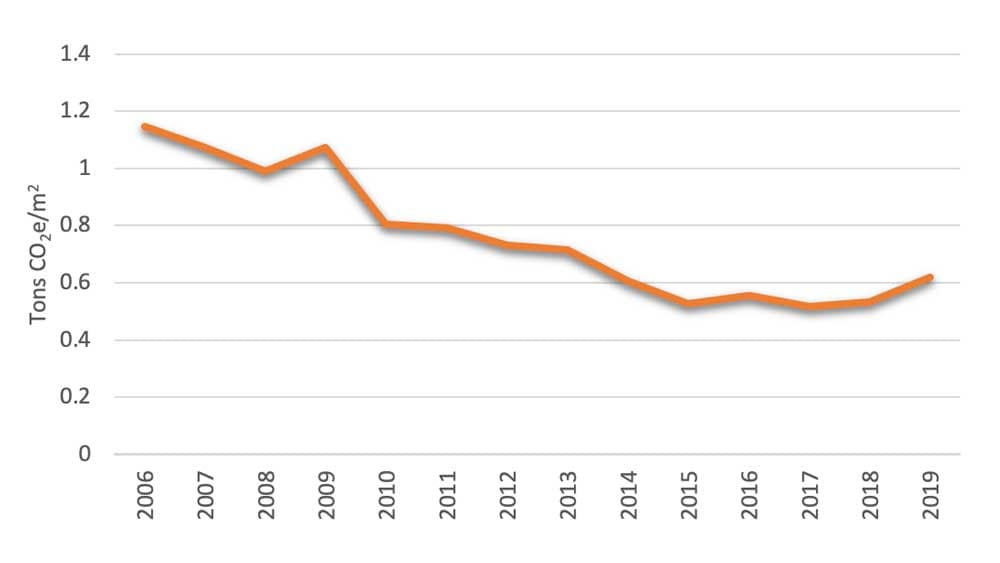 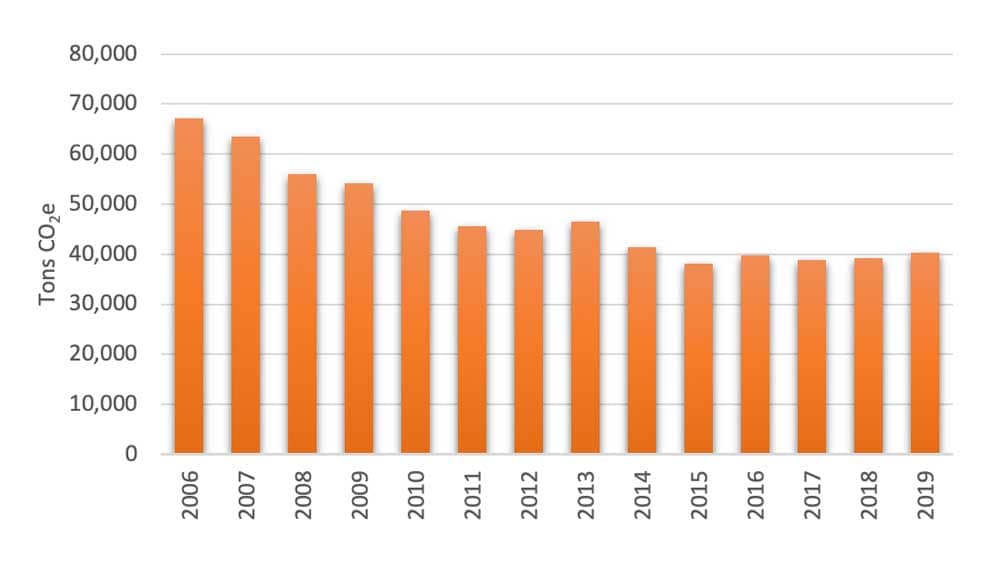 PFCs are essential chemicals in today’s semiconductor manufacturing processes. When it comes to etching integrated circuitry onto silicon wafers, or cleaning the internal chambers of deposition equipment, there are no alternatives for PFCs. Without them, semiconductor companies would not be able to produce the complex, high performance ICs that have become so essential to our daily lives. Nevertheless, PFCs pose a serious dilemma for every semiconductor company. We have essentially exhausted the two most cost-effective options for PFC reduction–process optimization and switching to alternative gases.

We recognize the undesirable impact PFCs have on the environment and have joined with others in the semiconductor industry to seek ways to minimize their use and emissions. For example, NXP signed the Memorandum of Understanding in the US and the Memorandum of Agreement in Europe, to voluntarily reduce the emissions of PFCs. The industry achieved this target before the 2010 deadline. The European Union has recognized the semiconductor industry’s proactive approach by granting an exemption to the so-called F-gases regulation. It is a voluntary agreement. No ban on the use of PFCs for critical applications has been imposed on the semiconductor industry in Europe. We are, however, committed to looking for alternatives.

Like the rest of the semiconductor industry, NXP Semiconductors remains strongly devoted to its proactive management of PFC emissions. We support the New 2010-2020 Global Semiconductor Industry Voluntary Agreement, including the Best Practice Guidance which addresses worldwide emissions from semiconductor manufacturing for the present decade. The agreement is supported by all members of the World Semiconductor Council (WSC) and covers the optimization of production processes (so they consume less greenhouse gases), the replacement of greenhouse gases with global warming potential (GWP)-free or lower-GWP alternatives and use of the most up-to-date abatement technology.

NXP also has its own goals for the reduction of PFC emissions. We proactively review Point-Of-Use (POU) abatement when we maintain, replace or relocate existing fab tools. As we upgrade existing process tools, we add POU abatement, when feasible. If such POU abatement is not feasible, we look for measures elsewhere in our factories to compensate for the emissions. In 2019, the Chandler fab installed 4 abatement equipment to further reduce the emissions of PFCs (NF3, CF4, C2F6).

As a global company, we use the Intergovernmental Panel on Climate Change (IPCC) for calculating our PFC emissions using the Tier 2b methodology. From 2010 to 2019, our normalized total PFC emissions decreased by 52%, even though many of our products have become more complex, requiring additional manufacturing steps and hence more PFCs. 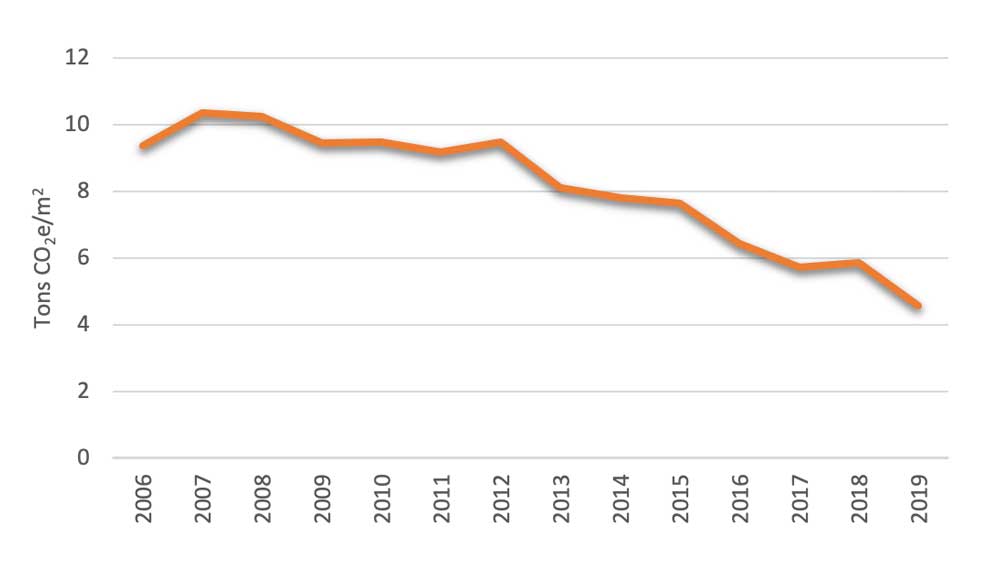 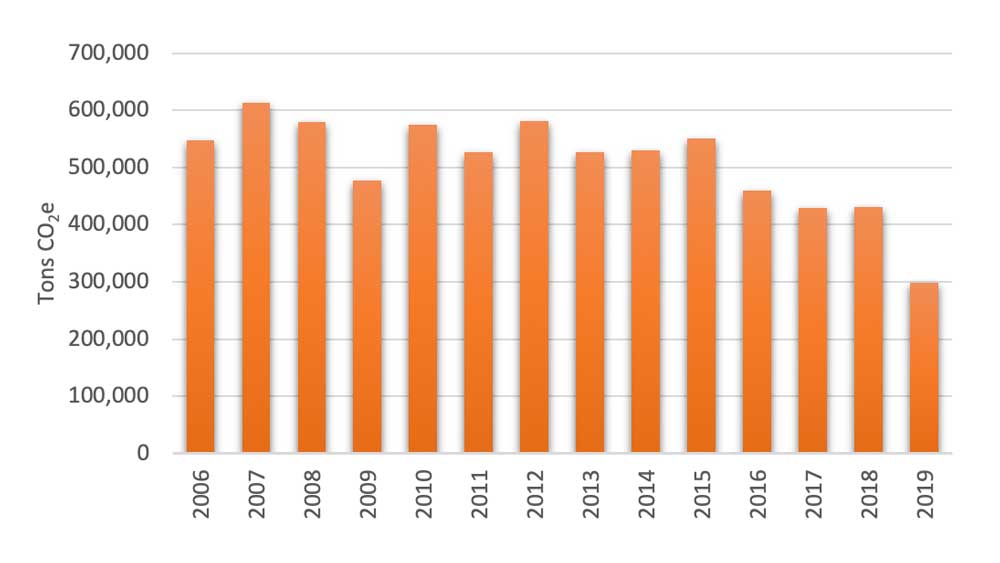 NXP uses HTFs for device testing, for cooling purposes (manufacturing tools, facilities, and air-conditioning), and in a few cases as a fire suppressant.

During the manufacture of semiconductor devices, HTFs serve as coolants in chillers, removing excess heat during many manufacturing processes. During semiconductor device testing, devices are immersed in containers of HTFs, cooled or heated to a desired temperature to verify their integrity and exposed to HTFs to prevent overheating during certain tests. HTFs are also used to attach semiconductor devices to circuit boards via solder, which may be melted by the vapor of an HTF heated to its boiling point.

Some of the HTFs we use are ozone-depleting substances and, as such, are strictly controlled. For instance, the European Union has adopted regulation EC No 1005/2009 on substances that deplete the ozone layer. By order of this regulation, the so-called “controlled substances” are to be phased out. The phase-out date differs from country to country. NXP has strict rules in place, regarding all ozone-depleting substances, calling for their phase-out well before legislation comes into effect.

From 2013 to 2019 our normalized and total HTF emissions increased due to the higher demand of products that require HTFs for device testing. 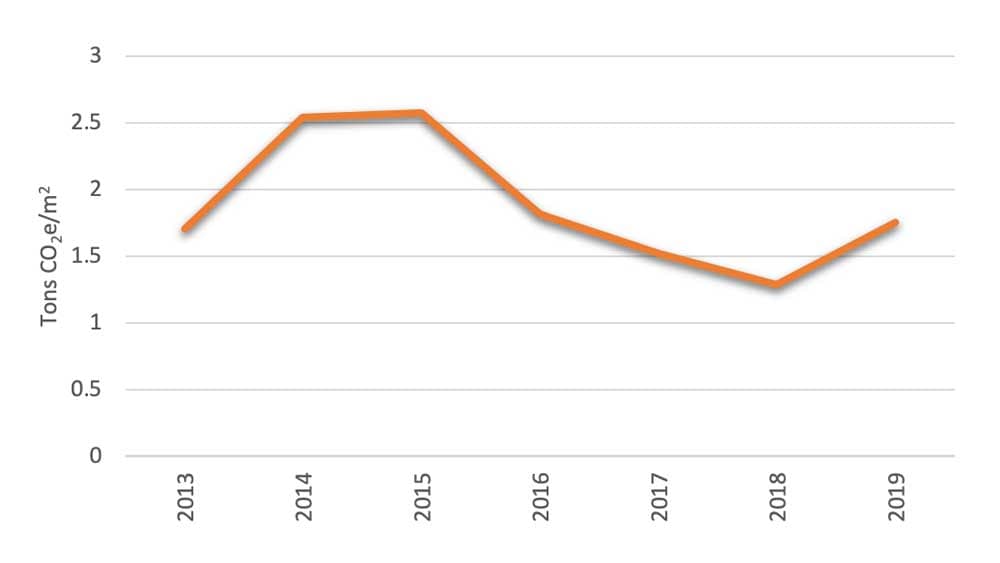 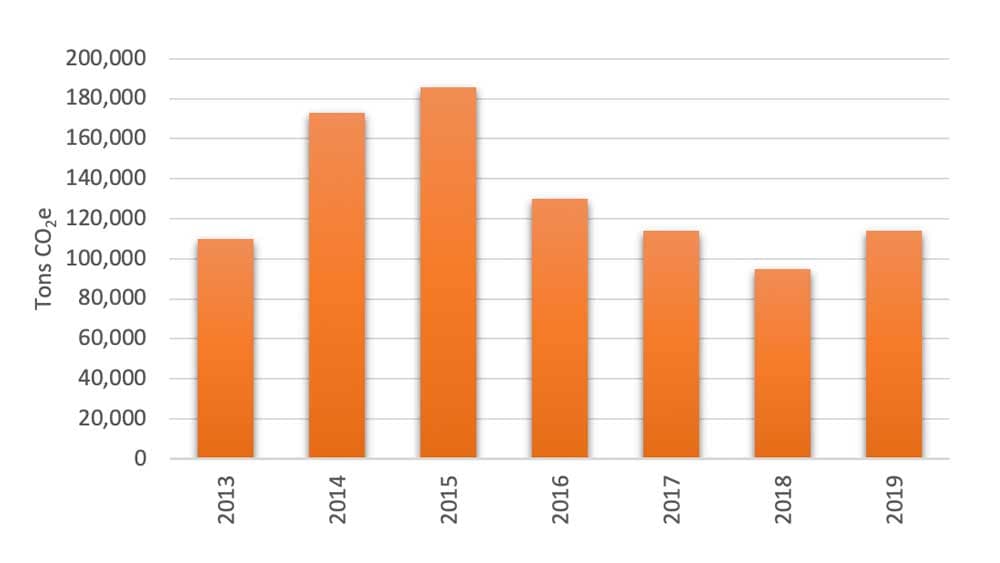 HTFs are used to detect pin hole leaks on RF power amplifiers. However, during the testing there are two steps within the testing procedure that releases HTFs into the atmosphere which are due to vapor diffusive loss and fluid drag out. HTFs contribute to one of the highest emissions of GHG from the Kuala Lumpur site.

To address HTF emission reduction at Kuala Lumpur, a three-phase project was developed. The first phase was to substitute a high global warming potential HTF with a lower global warming potential HTF. This substitution of materials reduced the emissions by 10%. The second phase modified the existing process by minimizing the surface area of the testing tray to capture more fluid in the vat and reduce the drag out which resulted in another 20% reduction of emissions. The third phase is modifying the manual system by designing a semi-automated, closed loop system. This new system will add additional mechanisms to create 2 zones in which emissions are now collected instead of emitted. The first zone captures the vaporized solvent through the cooling process and the second zone recycles the solvent in a closed loop system by condensation. This will provide an additional 40% emission reduction.

Emissions from N2O are minor compared to other emissions such as those from PFCs. From 2010 to 2019 the normalized N2O emission decreased by 35.6%. 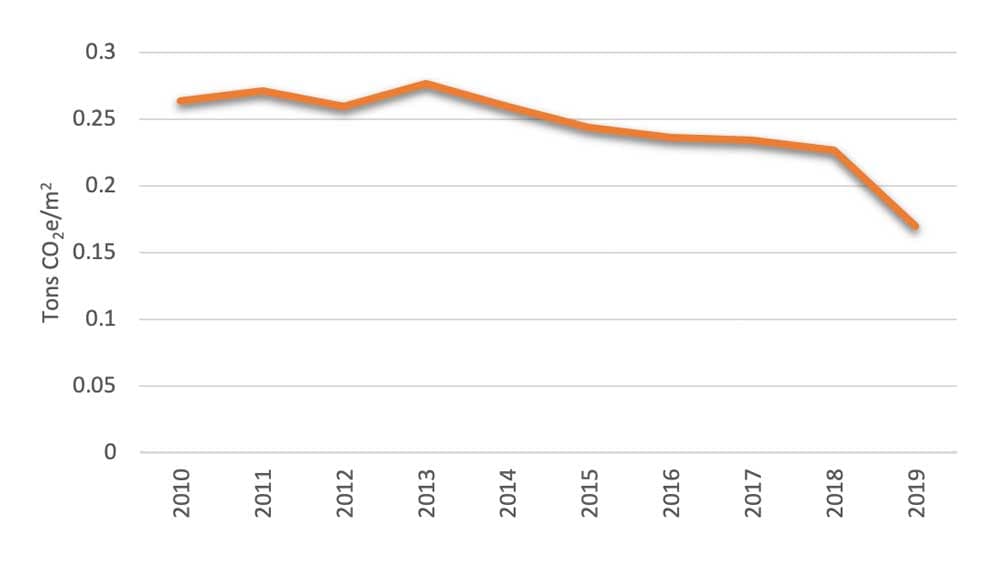 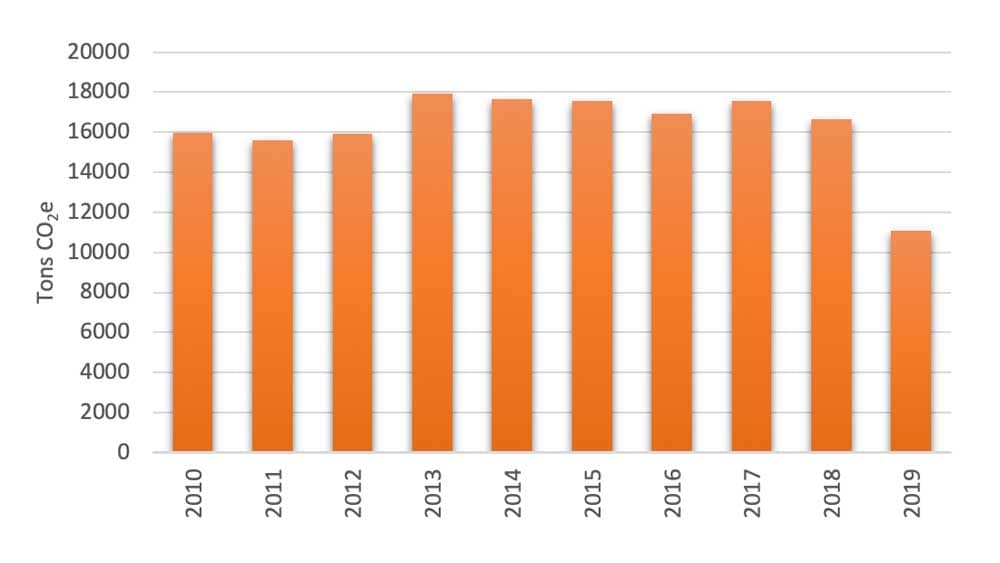 Additional emissions are nitrogen oxides (NOx), sulphur oxides (SOx) and volatile organic compounds (VOC). NOx and SOx are air pollutants that arise from a wide variety of sources but mainly because of combustion. NOx is a term used to refer to nitric oxide (NO) and nitrogen dioxide (NO2). SOx refer to sulphur dioxide (SO2). 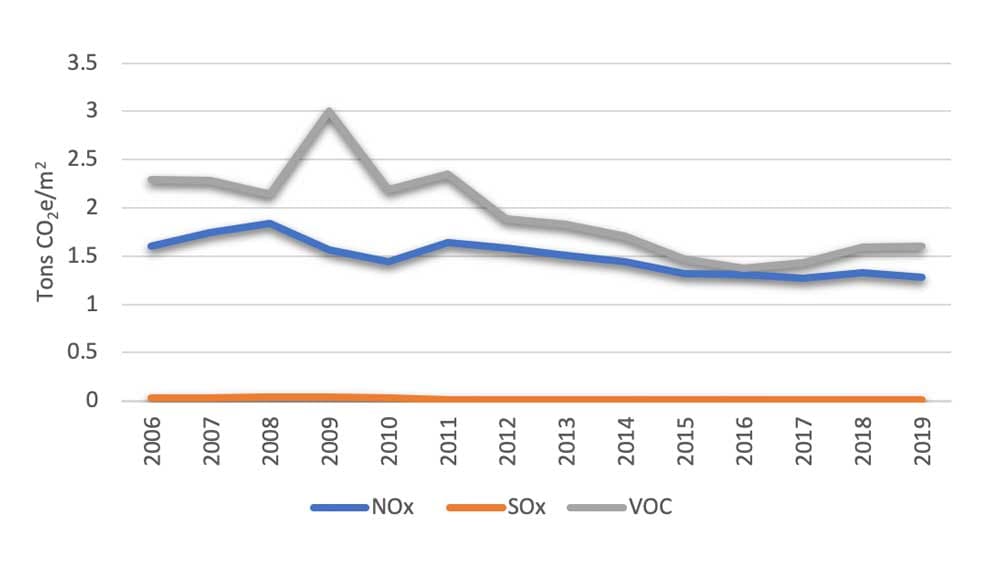 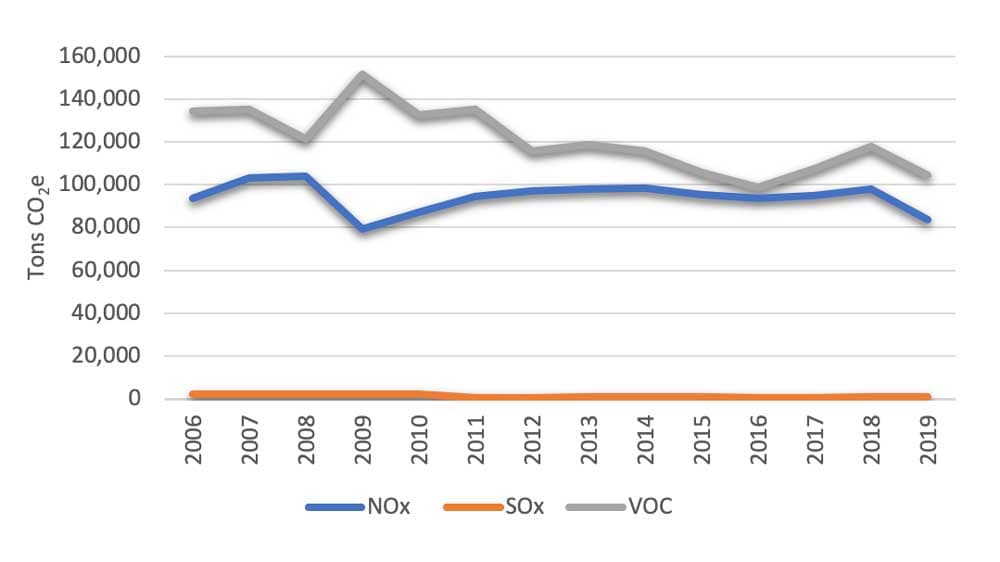 Our Scope 2 emissions is a result of our consumption of electricity. The indirect CO2 emission for electricity results from the combustion of fossil fuel in third-party power plants.

The CO2 conversion factor is defined as the standardized figure used within NXP to calculate the average amount of CO2 emissions, resulting from the use of energy sources. These conversion factors are country-specific and are based on information made available by the International Energy Agency.

The use of electricity and our approach to saving energy is reported in the “Energy” section. 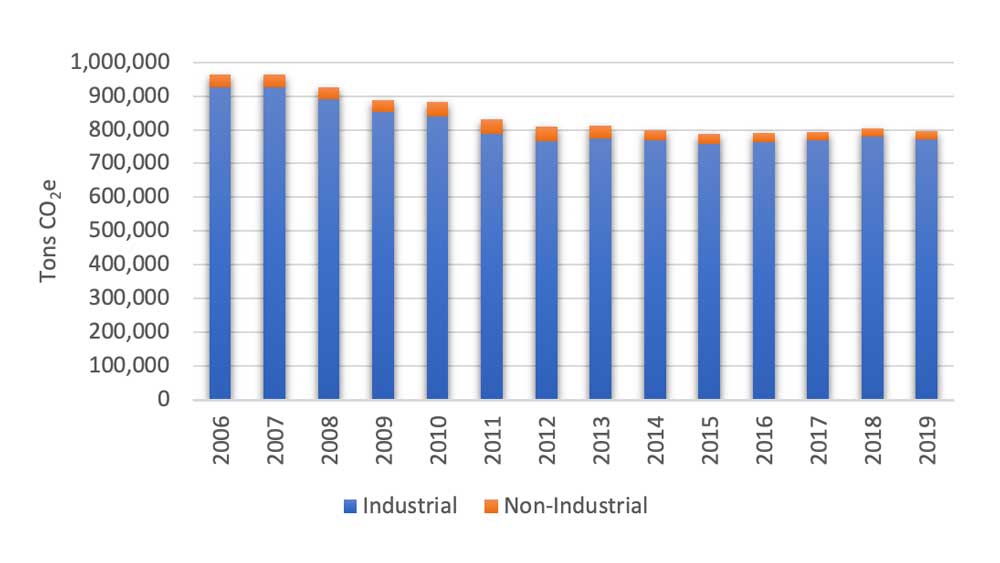 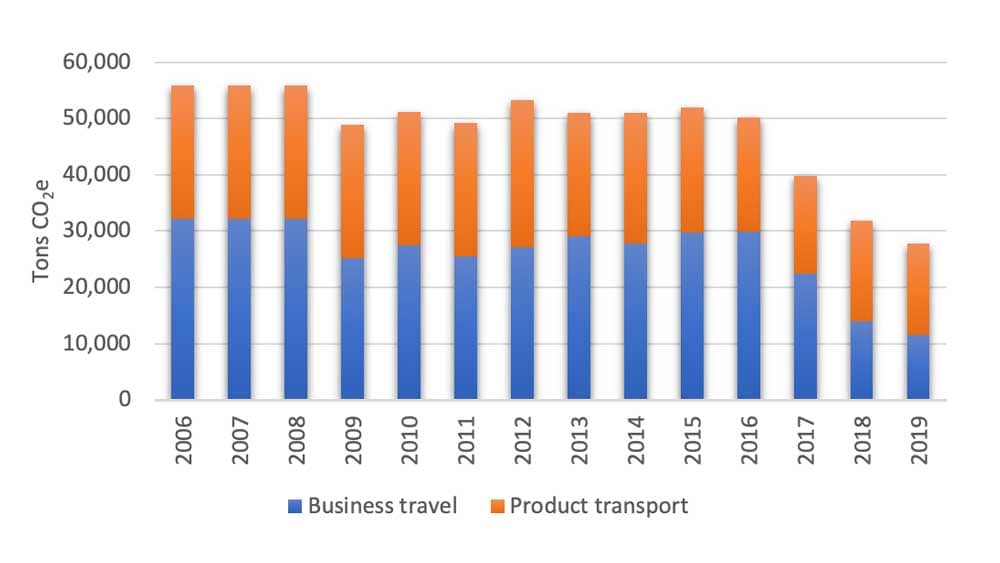 From 2010 to 2019 our product transportation emissions decreased by 31%. We are consolidating our central distribution centers and optimizing our shipping routes in which we contribute to the reduction of product transportation emissions. The standard value of reference for calculating airfreight CO2 is 0.567 kg per km. This is a value set by the Intergovernmental Panel on Climate Change (IPCC). 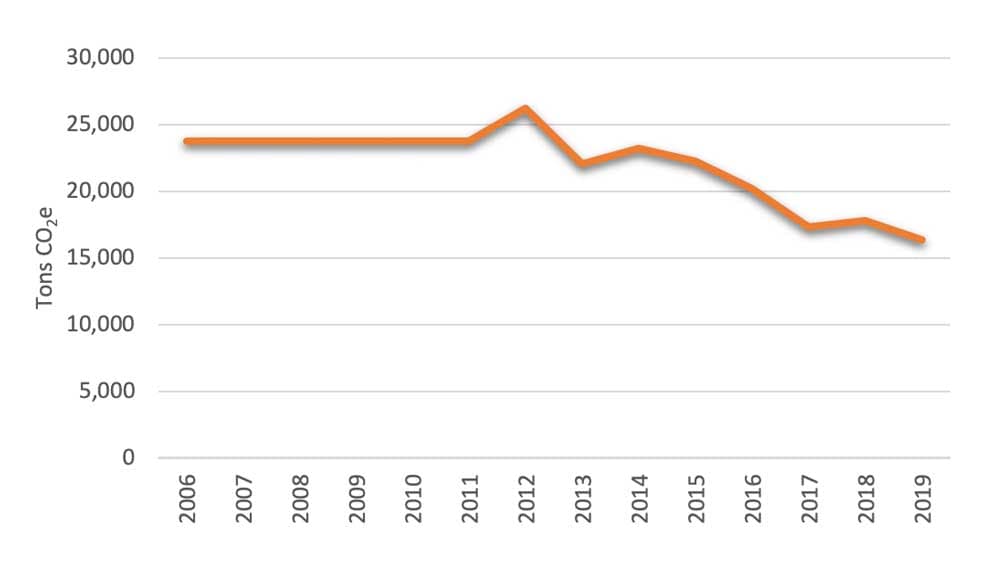 Business travel makes up a very small part of our CO2 emissions. Medium-and long-haul flights emit less CO2 per passenger km than short-haul flights, and rail travel is approximately 50% less CO2-intensive per passenger mile than air travel. Emissions from flights are calculated by using flight-distance categories (short, medium or long haul), along with the distance and average flight emission factors provided by the UK Department of Environment, Food and Rural Affairs (DEFRA) as of 2013. 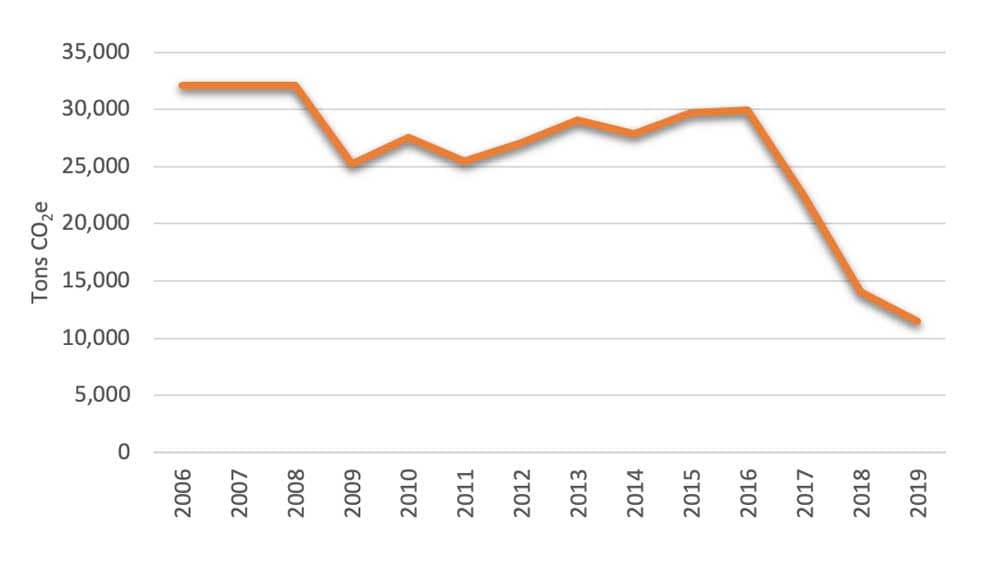