The PCA9922 is an 8-channel constant current LED driver designed for LED signage and display applications. The output current is adjustable from 15 mA to 60 mA controlled by an external series resistor. The outputs are controlled via a serial interface with a maximum clock frequency of 25 MHz to allow for the system requirement of high volume data transmission. Each of the 8 channel outputs has edge rate control to limit the change in current when the outputs are enabled or disabled.

The device has built-in circuitry for detecting LED open-circuit and output short to ground. After signaling the specified error detect sequence on the input control lines, error status can be read out of the device via the serial data out.

The device is designed such that it may be cascaded with other similar devices. The SDO pin contains the output of the shift register which may be used for cascading to the SDI pin of the next device in the series. SDO changes state on the falling edge of CLK. SDI captures data on the rising edge of CLK. 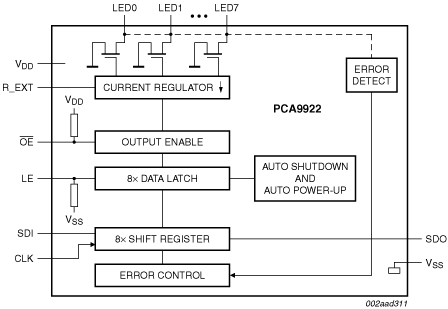