Archived content is no longer updated and is made available for historical reference only.

The CBTL06121 is a six-channel (âhexâ) multiplexer for DisplayPort and PCI Express applications at Generation 1 (âGen1â) speeds. It provides four differential channels capable of switching or multiplexing (bidirectional and AC-coupled) PCI Express or DisplayPort signals, using high-bandwidth pass-gate technology. Additionally, it provides for switching/multiplexing of the Hot Plug Detect signal as well as the AUX or DDC (Direct Display Control) signals, for a total of six channels.

The CBTL06121 is designed for Gen1 speeds, at 2.5 Gbit/s for PCI Express or 2.7 Gbit/s for DisplayPort. The device is available in two different pinouts (A and B, orderable as separate part numbers) to suit different motherboard layout requirements.

The typical application of CBTL06121 is on motherboards, docking stations or add-in cards where the graphics and I/O system controller chip utilizes I/O pins that are configurable for either PCI Express or DisplayPort operation. The hex display MUX can be used in such applications to route the signal from the controller chip to either a physical DisplayPort connector or a PCI Express connector using its 1 : 2 multiplexer topology. The controller chip selects which path to use by setting a select signal (which can be latched) HIGH or LOW.

Optionally, the hex MUX device can be used in conjunction with an HDMI/DVI level shifter device (PTN3300A, PTN3300B or PTN3301) to allow for DisplayPort as well as HDMI/DVI connectivity. 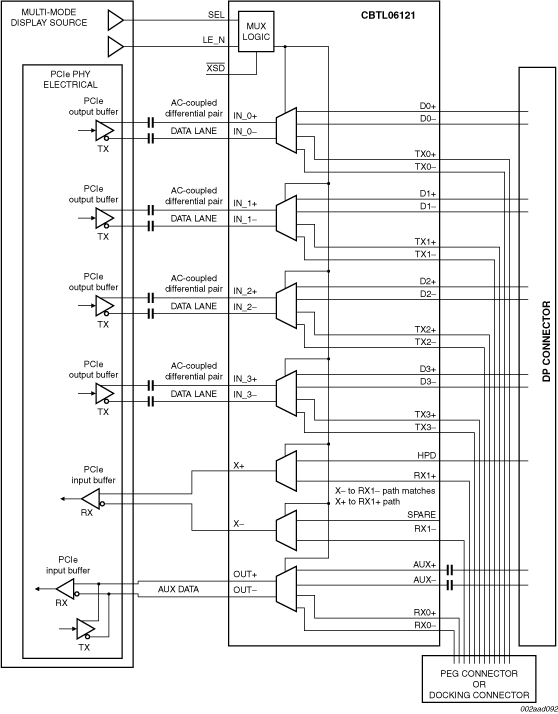