The PCA9626 is an I²C-bus controlled 24-bit LED driver optimized for voltage switch dimming and blinking 100 mA Red/Green/Blue/Amber (RGBA) LEDs. Each LED output has its own 8-bit resolution (256 steps) fixed frequency individual PWM controller that operates at 97 kHz with a duty cycle that is adjustable from 0 % to 99.6 % to allow the LED to be set to a specific brightness value. An additional 8-bit resolution (256 steps) group PWM controller has both a fixed frequency of 190 Hz and an adjustable frequency between 24 Hz to once every 10.73 seconds with a duty cycle that is adjustable from 0 % to 99.6 % that is used to either dim or blink all LEDs with the same value.

The PCA9626 is one of the first LED controller devices in a new Fast-mode Plus (Fm+) family. Fm+ devices offer higher frequency (up to 1 MHz) and more densely populated bus operation (up to 4000 pF).

The active LOW Output Enable input pin (OE) blinks all the LED outputs and can be used to externally PWM the outputs, which is useful when multiple devices need to be dimmed or blinked together without using software control.

Software programmable LED Group and three Sub Call I²C-bus addresses allow all or defined groups of PCA9626 devices to respond to a common I²C-bus address, allowing, for example, all red LEDs to be turned on or off at the same time or marquee chasing effect, thus minimizing I²C-bus commands. Seven hardware address pins allow up to 126 devices on the same bus.

The Software Reset (SWRST) Call allows the leader to perform a reset of the PCA9626 through the I²C-bus, identical to the Power-On Reset (POR) that initializes the registers to their default state causing the output NAND FETs to be OFF (LED off). This allows an easy and quick way to reconfigure all device registers to the same condition.

In addition to these features found in PCA9633, PCA9634, PCA9635, PCA9622 and PCA9624, a new feature to control LED output pattern is incorporated in the PCA9626. A new control byte called ‘Chase Byte’ allows enabling or disabling of selective LED outputs depending on the value of the Chase Byte. This feature greatly reduces the number of bytes to be sent to the PCA9626 when repetitive patterns need to be displayed as in creating a marquee chasing effect.

If the PCA9626 on-chip 100 mA NAND FETs do not provide enough current or voltage to drive the LEDs, then the PCA9634 and the PCA9635 with larger current or higher voltage external drivers can be used. 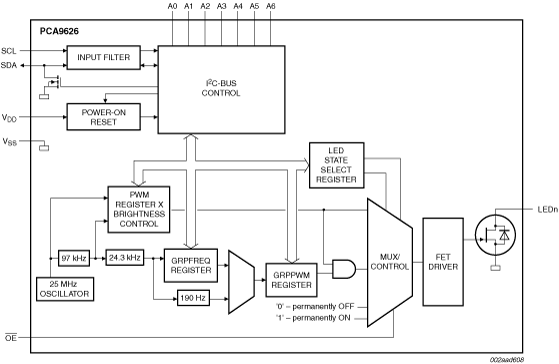 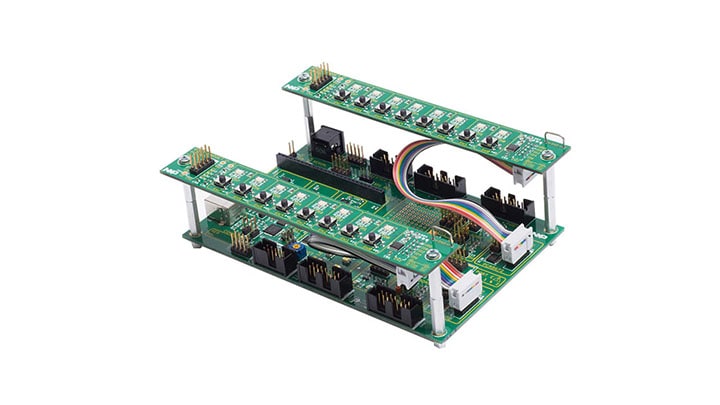