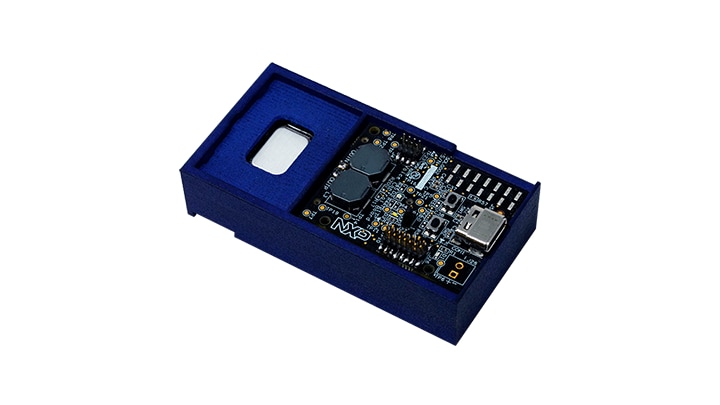 The SLN-ALEXA-IOT Kit arrives in a box as shown below. Inside the box, in addition to the kit, you will find a Quick Start Card, “Let’s Get Started!,” and a USB Type-C to dual Type-A cable,The kit is pre-programmed with an audio playback control demo that is ready to run, as soon as it is powered via the USB cable.

The owners of the SLN-ALEXA-IOT development kit may have a “Let’s Get Started card” in the box. This is no longer needed so please disregard.

Plug the USB Type-C connector into the SLN-ALEXA-IOT Development kit and the dual Type-A connectors into your PC. 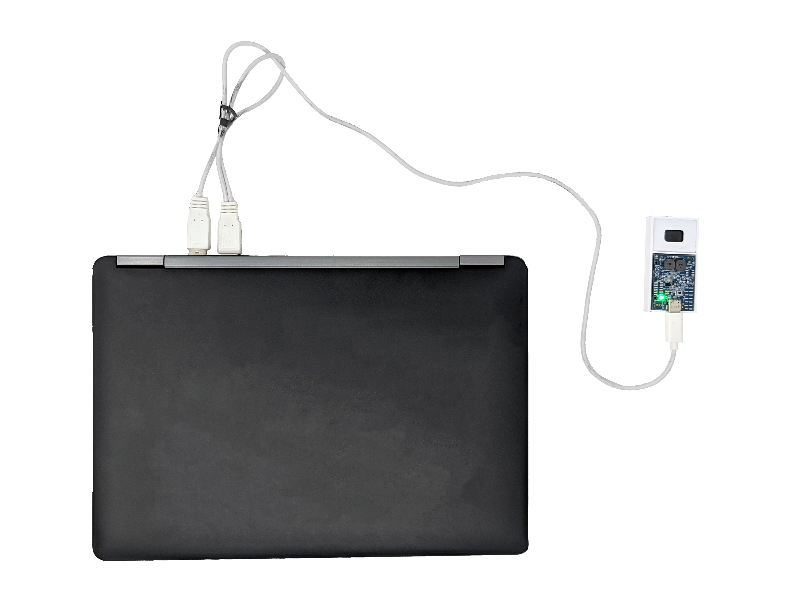 When you power on the kit for the first time, the LED will turn from blinking orange to permanent orange to indicate it’s ready to onboard. 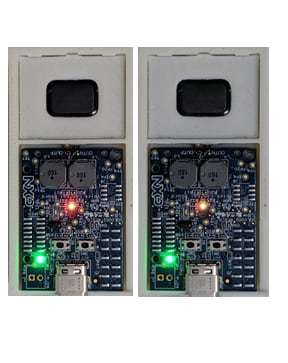 Use the phone Wi-Fi network to connect to the device using these settings:

To start onboarding, search and install the “NXP Voice Companion Application” in the iOS or Android store.

After downloading the application, you are ready to start communicating with the SLN-ALEXA-IOT development kit. Connect to the Wi-FI Access point on the mobile phone.

Once connected, open the NXP Voice Companion App and select “WIFI PROVISION”. If the device is not connected to the SLN-ALEXA-IOT Development Kits Wi-Fi, a prompt is shown. 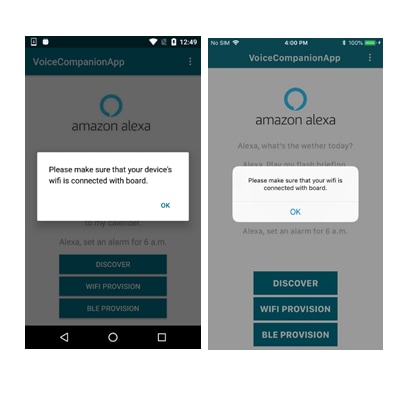 Select one of the available Wi-Fi networks from the list and provide the password associated with the Wi-Fi SSID. Once the password is correctly entered, press the “SEND” button to transmit the Wi-Fi credentials to the SLN-ALEXA-IOT Development kit or select “CANCEL” button to make another selection. 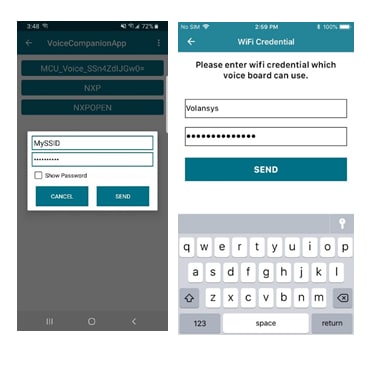 Once the credentials have been sent, the application will inform the user to join the mobile device to same Wi-Fi network that was sent to the SLN-ALEXA-IOT Development kit. Having both devices using the same Wi-Fi network is mandatory for the onboarding process.

Within the prompt, select the “GO TO SETTINGS” button, which will open the Wi-Fi settings page. Connect to the Wi-Fi network which was sent to the SLN-ALEXA-IOT Development kit.

When returning to the application, it will verify the Wi-Fi network that was joined on the mobile device is the same as the one sent to the SLN-ALEXA-IOT Development kit.

If the Wi-Fi network is not the same the application will ask to join the correct network.

If the Wi-Fi network is the same, the application will redirect to the “Discover” listing screen.

The device should be in the discovery mode state showing a blue LED (D2). When the "Discover" screen is shown (either automatically or by being selected on the main screen), it will discover all SLN-ALEXA-IOT Development kits and display the serial number in the list. If no SLN-ALEXA-IOT Development kits are found on the same network, a “No Devices Found” message will appear in the NXP Voice Companion App. 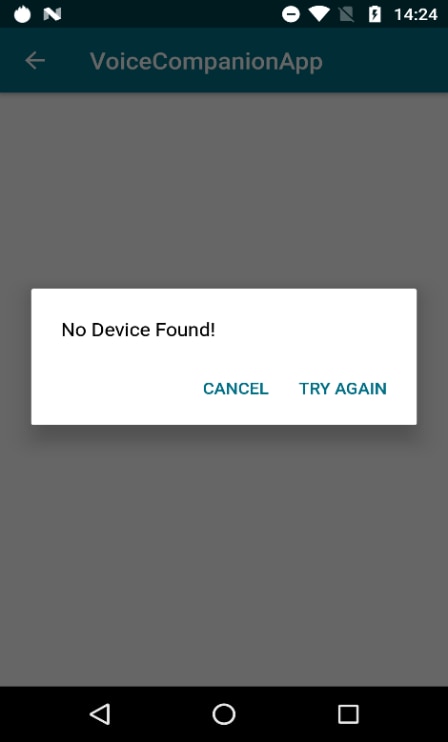 To start the onboarding of the SLN-ALEXA-IOT Development kit to your Amazon Alexa account, select the device you wish to onboard. This will start the Login with Amazon (LWA) process. Once the credentials have been entered and a successful logged in, the NXP Voice Companion App will continue to communicate with the SLN-ALEXA-IOT Development kit and display a completion percentage.

When the Access Token from LWA has been received, the SLN-ALEXA-IOT Developent kit will begin to connect to the cloud and register with the “AVS on MCU” service, which will turn the LED (D2) orange while this is happening. 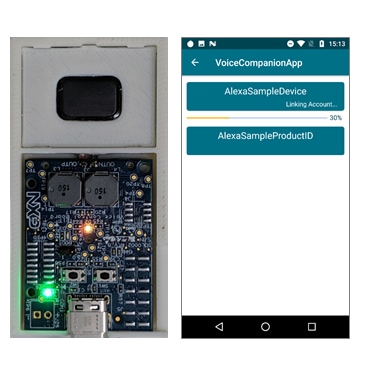 If the device fails to register, the NXP Voice Companion App will display an “failed to register” error underneath the serial number in the list. 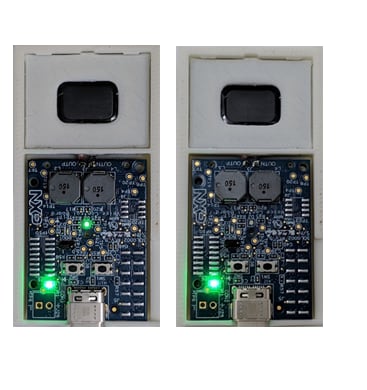 Once the device has completed the LWA process, the NXP Voice Companion App will update the percentage. The device will start blinking green every 500ms until the device has successfully connected to AWS IoT Core.

Once the device has successfully connected to AWS IoT Core, it will commence the registration and connection to AVS via AWS IoT which results in the device blinking green every 250ms.

Once the device has completed, the serial number in the NXP Voice Companion App will change to yellow with the text being shown as “complete” while the SLN-ALEXA-IOT Development kit turns the LED (D2) off and plays a chime.

The SLN-ALEXA-IOT Development kit is now connected to your Amazon Alexa account. If you go into the Amazon Alexa application, the kit should be listed in your devices and called “NXP-Voice-Solution”. 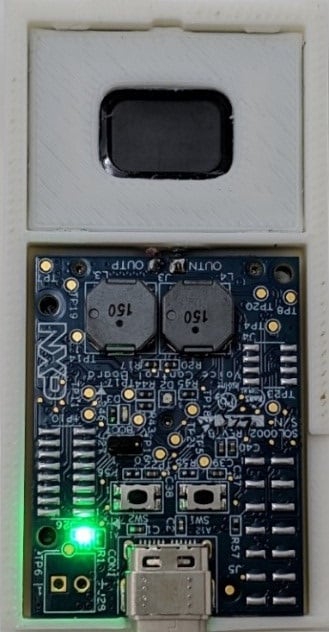 The first indication that the device is listening is when the Alexa wake word is uttered. When the SLN-ALEXA-IOT Development kit detects the wake word, a cyan light will be shown, it will start to listen and send microphone data to AVS via AWS IoT. 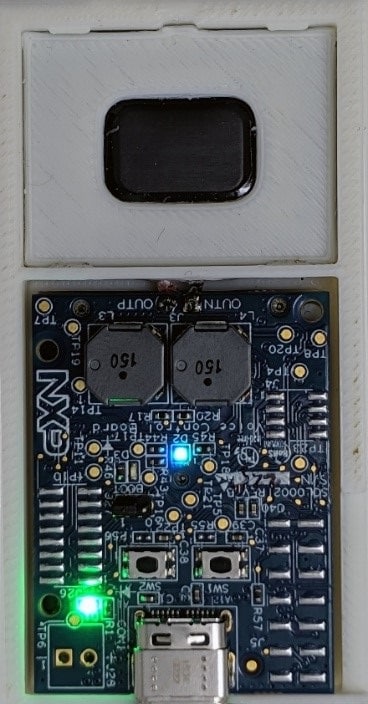 After the device has finished sending microphone data to AVS via AWS IoT, the device will stop listening and go into thinking state. This state indicates that the AVS is processing the request and is trying to give the best response. While in this state, the devices LED (D2) will blink cyan and blue every 200ms. 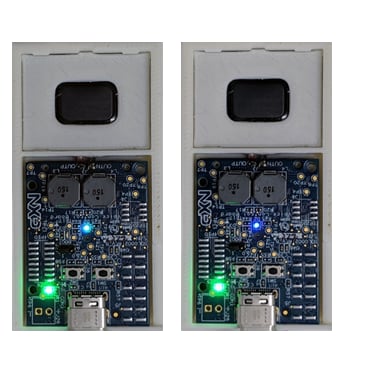 After the device has finished thinking, it will start to respond. Before the speaker outputs audio, the LED (D2) will go into the “speaking” state which is shown by blinking cyan and blue every 500ms.

While the LED (D2) is blinking, the response from Alexa will start playing out of the speaker. The response should indicate the weather conditions based on the location of your Alexa consumer account. Once this has completed, the LED (D2) will stop blinking and turn off to indicate it is now in an idle state waiting for the “Alexa” wake word.

2.1 Jump Start Your Design with the MCUXpresso SDK!

The MCUXpresso SDK is complimentary and includes full source code under a permissive open-source license for all hardware abstraction and peripheral driver software.

Many of the example applications output data over the MCU UART so you'll want to make sure that the driver for the board's virtual COM port is installed. Before you run the driver installer, you MUST have the board plugged into your PC.

With the serial port driver installed, run your favorite terminal application to view the serial output from the MCU's UART. Configure the terminal to 115200 baud rate, 8 data bits, no parity and 1 stop bit. To determine the port number of the MIMXRT1060-EVK virtual COM port, open the device manager and look under the "Ports" group.

Want to use a different toolchain? 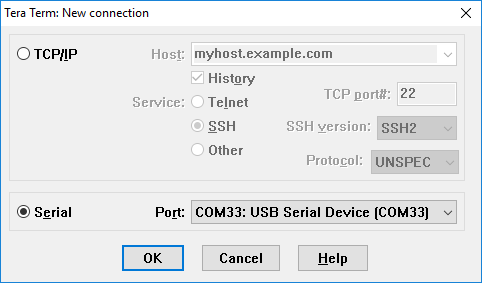 PuTTY is a popular terminal emulation application. This program can be used to display information sent from your NXP development platform's virtual serial port.

The MCUXpresso SDK comes with a long list of example application code. To see what's available, browse to the SDK boards folder of your SDK installation and select your board, the SLN-ALEXA-IOT (/boards/sln-alexa-iot).

To learn more about specific example code, open the readme.txt file in an example’s directory.

If one or more of the demo applications or driver examples sounds interesting, you're probably wanting to know how you can build and debug yourself. The Getting Started with MCUXpresso SDK guide provides easy, step-by-step instructions on how to configure, build and debug demos for all toolchains supported by the SDK.

Use the guide below to learn how to open, build and debug an example application using MCUXpresso IDE.

The MSD feature allows the device to be updated without the Segger tool and instead, via USB. Only the “ais_demo” can be updated while the bootloader and bootstrap remain the same. If the bootstrap and bootloader need updating, this will have to be done via Segger or the Factory Programming flow.

The MSD feature by default bypasses signature verification to allow an easier development flow as signing images can be a process not suitable for quick debugging and validation.

PLEASE NOTE, BYPASSING IMAGE VERIFICATION IS A SECURITY HOLE AND IT IS THE RESPONSIBILITY OF THE PRODUCT MAKER TO REMOVE THE VIOLATION.

To put the device into MSD mode, hold down switch 2 (SW2) and power cycle the board until the purple LED (D1) blinks on and off in three second cycles. 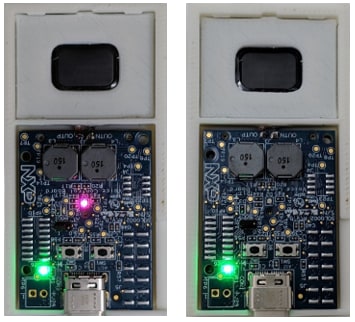 After observing the LED behavior, navigate to “My Computer” and confirm that the SLN-ALEXA-IOT kit has mounted as a Mass Storage Device

Take the compiled “ais_demo” binary and drag the file into the MSD. This will start the download process and write the binary to flash.

After the image has been programmed into flash, the image that has been loaded will begin to execute. Validate this by checking the version of the image compiled, matches the version in the console by typing “version”.

If the image is compiled to run in the wrong application bank, an error will occur. The developer will be required to recompile the application to the bank the device is not running from.

PLEASE NOTE, THIS REQUIRES AN AIS_DEMO BINARY THAT HAS BEEN COMPILED TO RUN IN THE OPPOSITE BANK THE CURRENT APPLICATION IS RUNNING IN 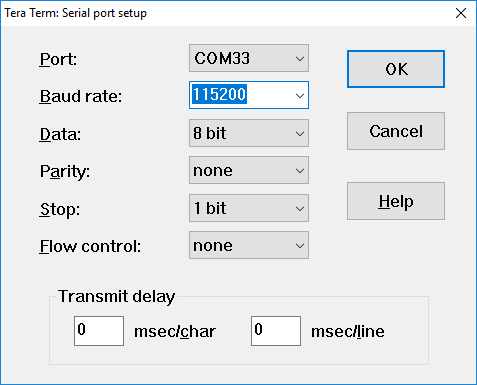 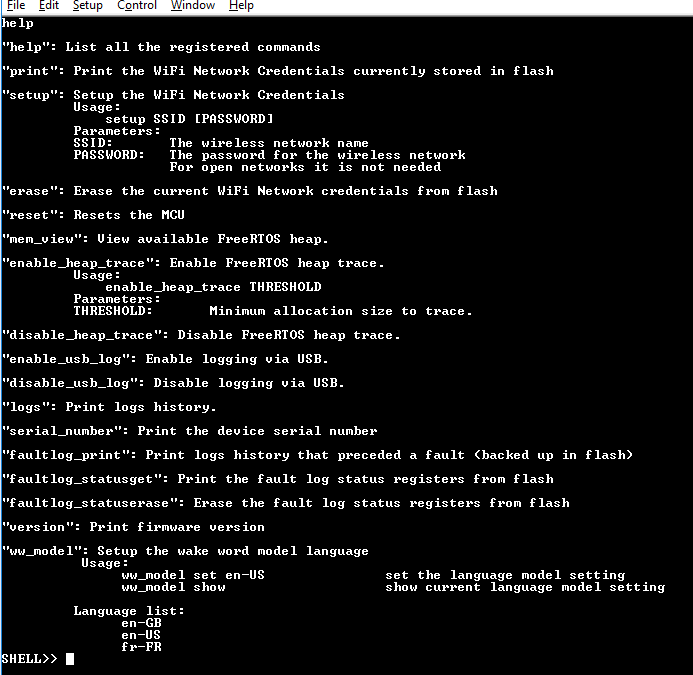 To obtain the logs of the SLN-ALEXA-IOT kit, type “logs” in the serial console.

4.3 Changing the Wi-Fi via Serial Terminal

To connect to a Wi-Fi Access Point, type “setup <SSID> <Password>” and press enter. In the case of unusual characters, wrap the values in quotes (“”).

4.5 Migrate to your own AWS IoT

The SLN-ALEXA-IOT kit by default connects to an NXP Semiconductor AWS Server by default to show how consumers would use out of the box. To migrate it to a developers account, navigate to the SLN-ALEXA-IOT-MG guide which details the process.