The MC44BC374B is compatible with the following formats:

An on-chip high-speed I2C compatible bus receiver is used to set the channel. It is tuned by a PLL over the full range of the UHF bands. The modulator incorporates a sound subcarrier oscillator and uses a second PLL to derive 4.5, 5.5, 6.0 and 6.5MHz subcarrier frequencies, which are selectable using the bus.

The modulation standard can be chosen using a control bit that selects between System L and System B/G.

The picture-to-sound ratio may be adjusted using the bus. In addition, an on-chip video test pattern gener-ator can be switched ON with a 1KHz audio test signal.

The dual output modulated signal is added to both antenna booster/ splitter outputs.

The MC44BC374B is available in two different size 24-pin packages: 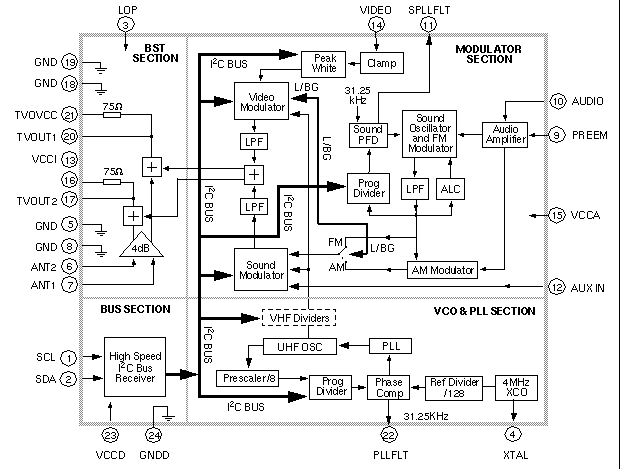