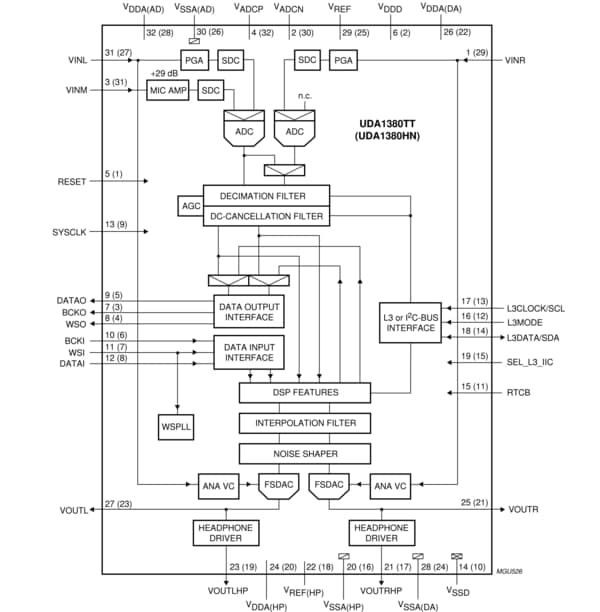 The UDA1380 is a stereo audio coder-decoder, available in TSSOP32 (UDA1380TT) and HVQFN32 (UDA1380HN) packages. All functions and features are identical for both package versions. The term 'UDA1380' in this document refers to both UDA1380TT and UDA1380HN, unless particularly specified.

The front end of the UDA1380 is equipped with a stereo line input, which has a PGA control, and a mono microphone input with an LNA and a VGA. The digital decimation filter is equipped with an AGC that can be used in case of voice-recording.

In addition, there is a built-in short-circuit protection for the headphone driver output that, in case of short-circuit, limits the current through the operational amplifiers and signals the event via its L3-bus or I²C-bus register.

The UDA1380 also supports an application mode in which the coder-decoder itself is not running, but an analog signal, for instance coming from an FM tuner, can be controlled in gain and applied to the output via the headphone driver and line outputs.

The UDA1380 has sound processing features in playback mode, de-emphasis, volume, mute, bass boost and treble that can be controlled by the L3-bus or I²C-bus interface.