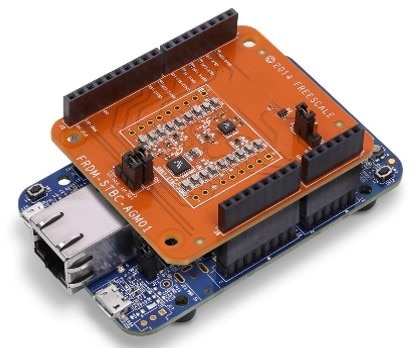 Connect the Sensor Demonstration Kit to the PC via the USB cable between the OpenSDA USB port on the board and the USB connector on the PC.

Kinetis Freedom MCU boards are supplied with OpenSDA firmware pre-loaded.
For a smooth ‘Out of Box Sensor Demonstration’ with STB-CE, make sure that the latest version of the default OpenSDA bootloader and Firmware application is on the Freedom development board. This allows debugging, flash programming and serial communication over a USB cable.

The default OpenSDA firmware for all Freedom based sensor demonstration kits used with STB-CE are as follows:

Obtain the latest OpenSDA drivers for FRDM boards from the link below.

OpenSDA Update to the FRDM boards

Locate the section "Download – OpenSDA Bootloader and Application" and select your FRDM Board from the dropdown list. Strictly follow the provided instructions to program the board.

For Windows 10 systems, the older versions of the OpenSDA drivers could get corrupted when the board is plugged on a Windows 10 machine. As a result, many boards might get not detected as an MSD or a COM port on Win 10. The latest versions of the OpenSDA software are compatible with Windows 10 and can be obtained from the link above. The current FRDM-K64F, FRDM-K22F, FRDM-KL25Z and RD-KL25-AGMP01 boards come with an older version of OpenSDA drivers from the factory and require a mandatory OpenSDA update.

The output data from the provided example applications is provided over the MCU UART. This requires that the driver for the board’s virtual COM port is installed on the PC. The board MUST be plugged into the PC before the driver installer is run.

If you have not installed already an ARM IDE toolchain, download and Install the Windows drivers corresponding to the default OpenSDA Application selected above:

Once the Windows Serial Port Drivers are installed on the PC, determine the port number of the board’s virtual COM port by opening the device manager and looking under the "Ports" group.

The demonstration kit is now ready to communicate with the PC.

Available in both online and desktop editions, MCUXpresso Config Tools creates a custom SDK for Kinetis, LPC and i.MXRT microcontrollers. 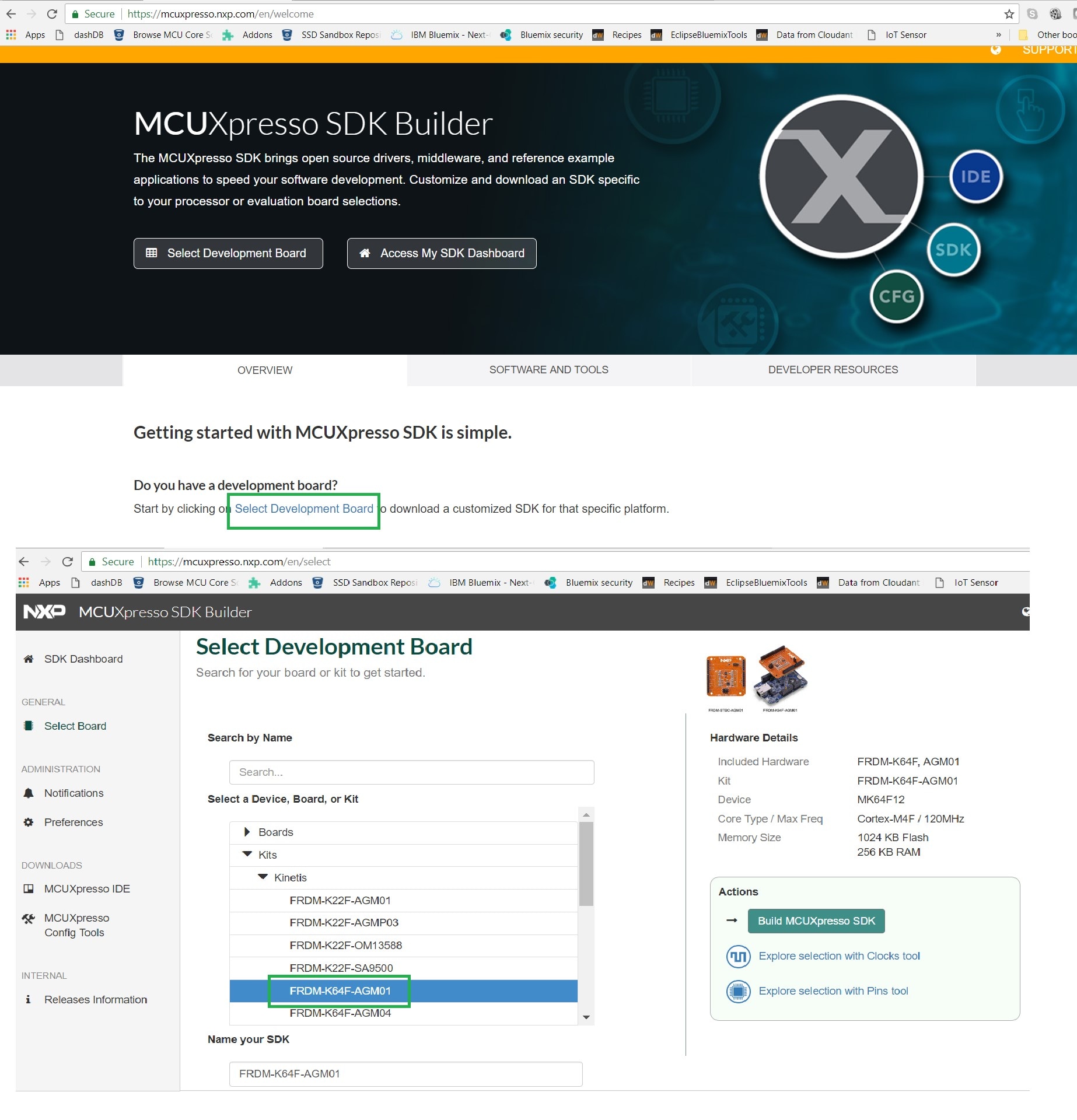 Choose the Operating System for the desired host, the IDE toolchain, and any other Optional Middleware. For this example, as depicted, Windows, MCUXpresso IDE and ISSDK middleware is selected.

2.3 Build the SDK for the demonstration kit

Click on Request Build. This builds the SDK package for the demonstration kit. A request is sent to the build server. Requests for SDK packages are served in the order they are received. Notification is provided when the package is ready. The package is provided as a zip file. When notified, download the package (zip file) to the local PC.

Want to use a different toolchain?

No problem! The MCUXpresso SDK includes support for other tools such as IAR, Keil and command-line GCC.

The sensor output of ISSDK example applications can be directly visualized on terminal applications like RealTerm, Tera Term, or Putty. Download here: 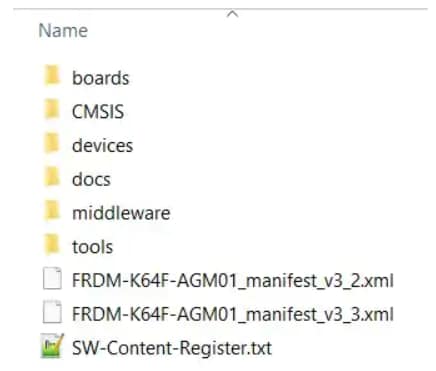 The CMSIS, devices, docs, rtos, and tools directories are unchanged from the standard KSDK deployments. The ISSDK folder appears as frdmk64_agm01 in the /boards directory. 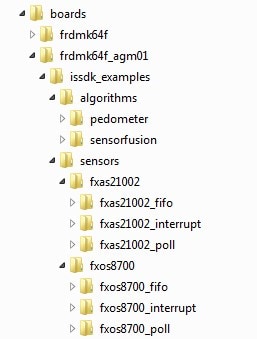 As shown above, ISSDK provides example applications for the FXAS21002 and FXOS8700 sensors. In addition, ISSDK includes algorithms such as Pedometer and Sensor Fusion. These sensor applications are ready to build and run with the FRDM-K64F-AGM01 Demonstration Kit.

Note: In addition, a new middleware folder for ISSDK is created containing the ISSDK drivers, algorithms and other support files as follows:

If one or more of the demo applications sounds interesting, you're probably wanting to know how you can build and run yourself. Let us take "fxas21002_interrupt" out-of-box example available as part of the downloaded SDK package and try running it with our chosen IDE: MCUXpresso.

3.2.1 Install the downloaded FRDM-K64F-AGM01 SDK package into MCUXpresso IDE (Simply drag & drop the zipped SDK package as it is to the “Installed SDKs” view). 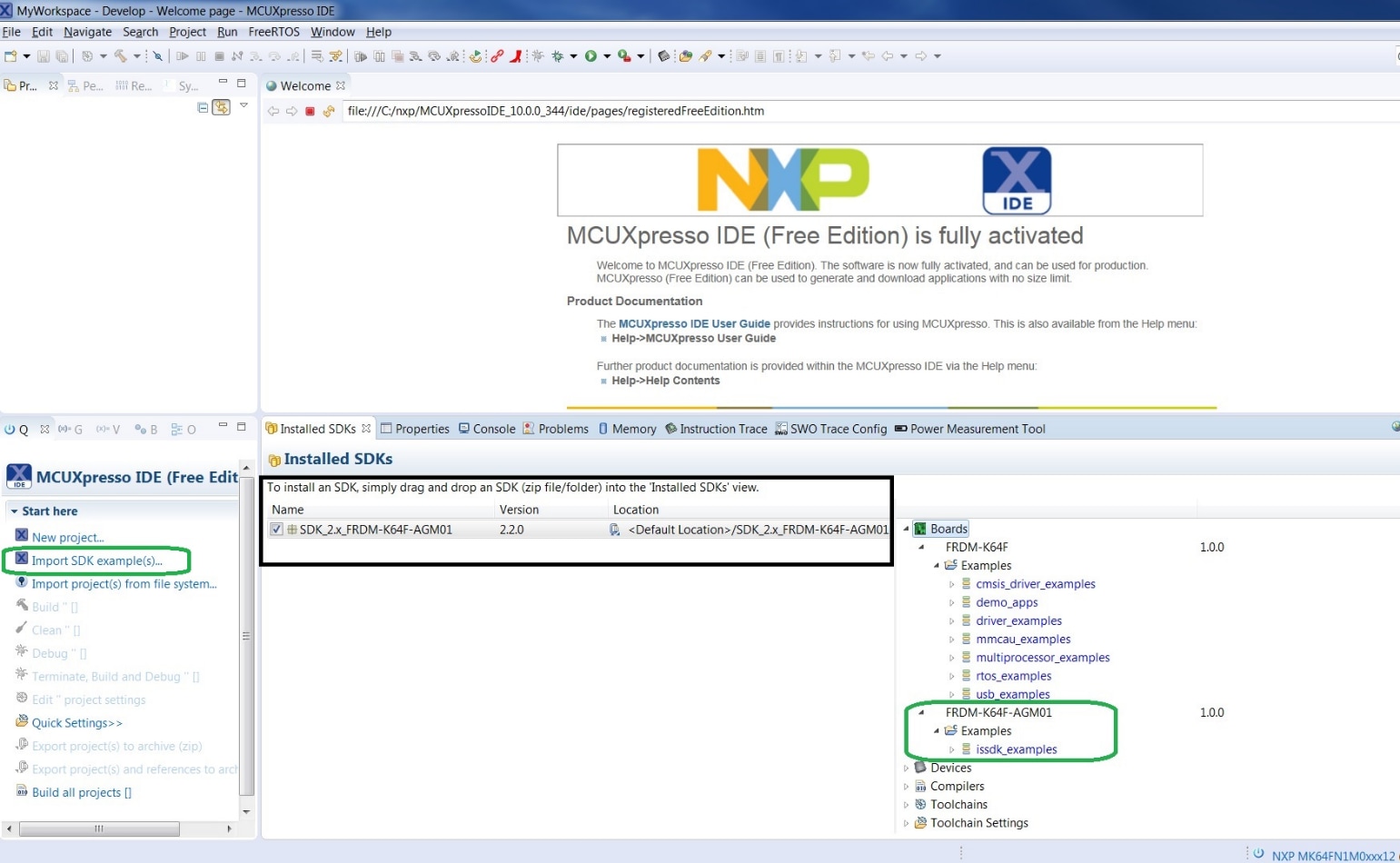 Once the SDK installation is completed, click on ‘Import SDK examples’.

3.2.2 In the SDK import wizard, chose FRDM-K64F-AGM01 demo kit as the available board for your project. 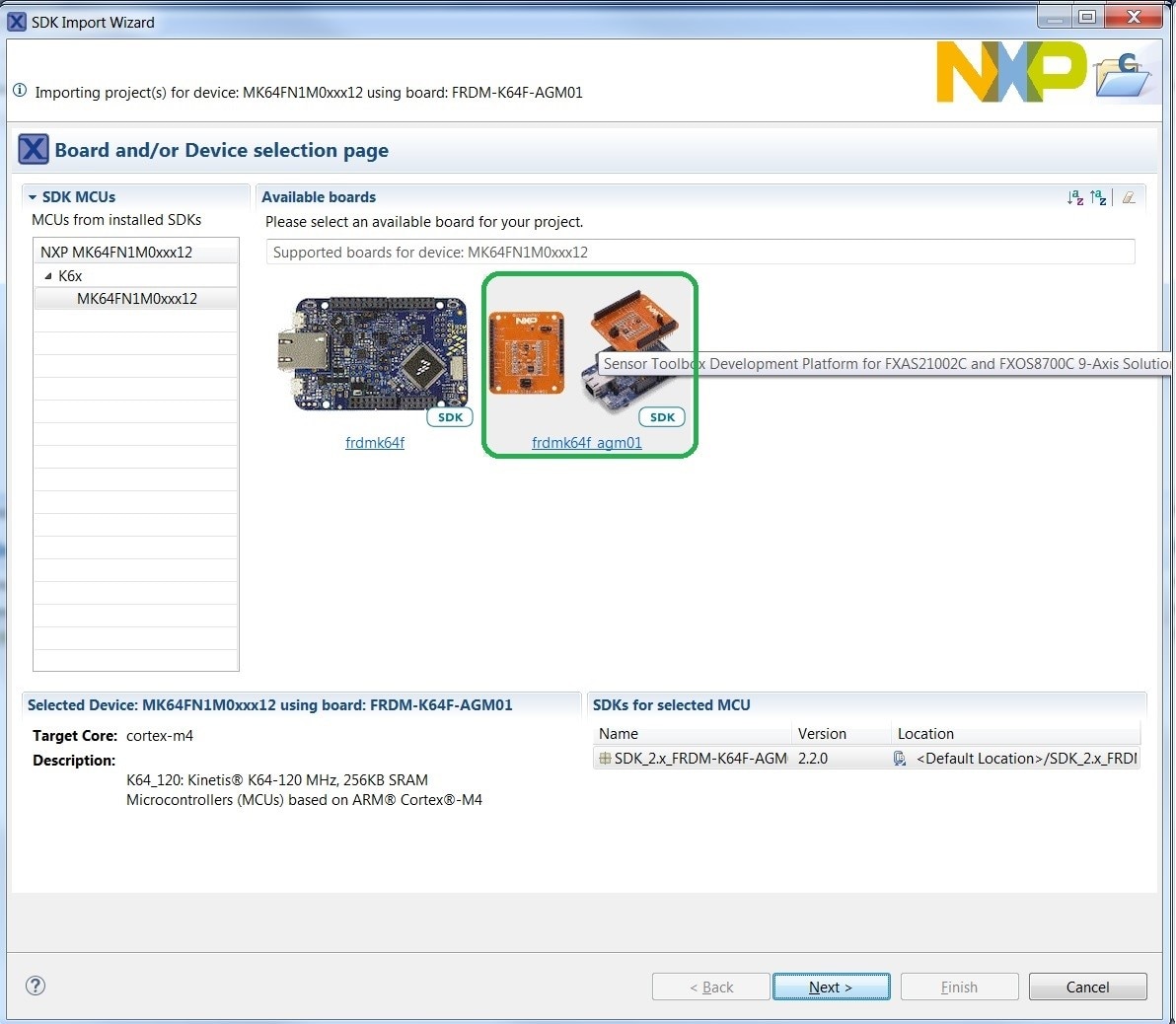 3.2.3 Import any existing ISSDK example from the list of available projects. We have chosen the fxas21002_interrupt example:

Note: Once, the ISSDK example is imported successfully, the MCUXpresso IDE automatically creates the corresponding standalone project in your workspace.

3.2.4 Build/Run the imported project, loading the firmware to FRDM-K64F-AGM01 kit. 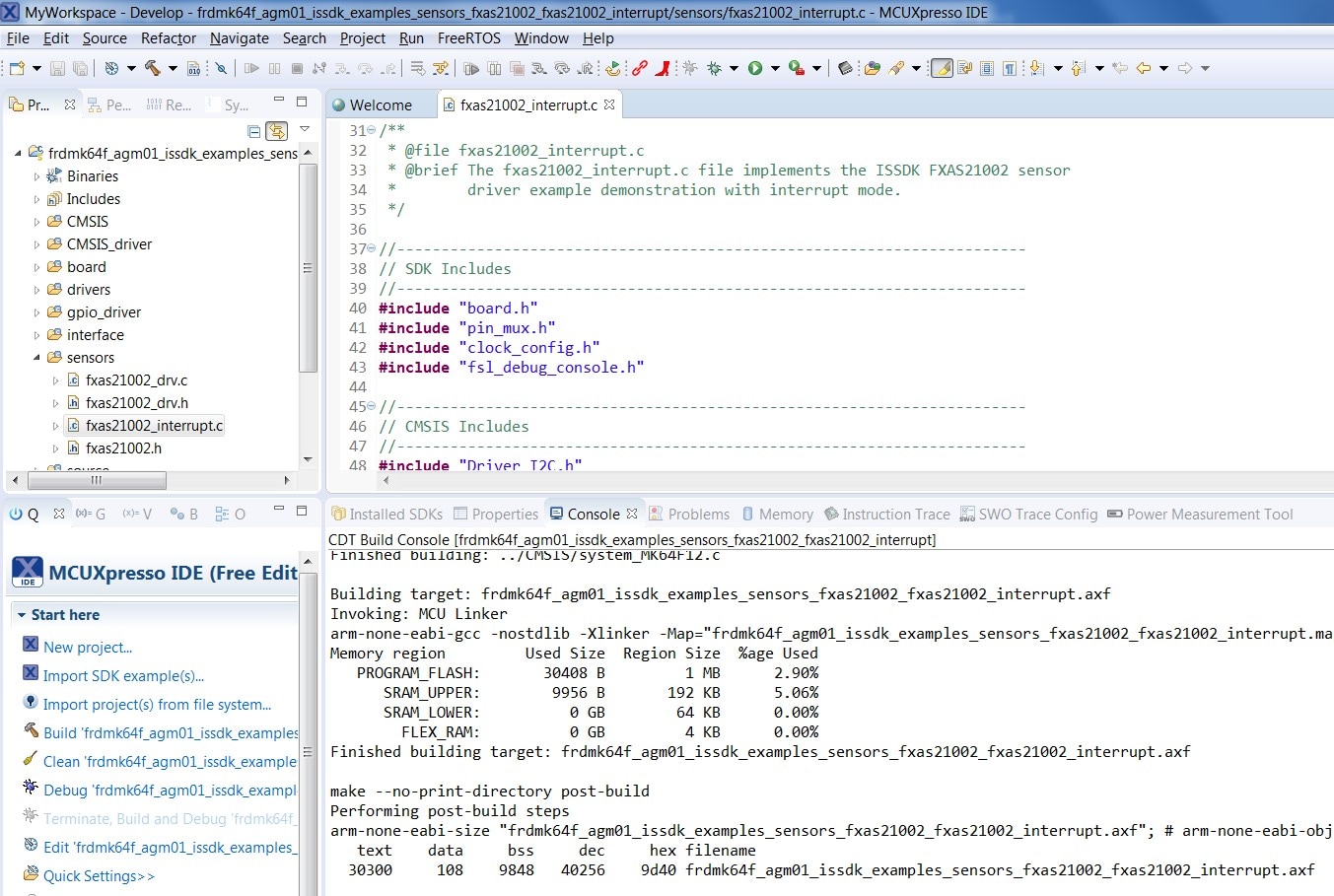 For the firmware to be loaded successfully, review Steps 1.3 and 1.4 to be sure that the MCU board has the latest OpenSDA FW and the PC has the appropriate Windows Serial Drivers.

The MCU board is now programmed and is ready to output FXAS21002 sensor data.

Terminal applications, such as Realterm, TeraTerm, or Putty, can be used to view the sensor output from the board. Refer to the readme.txt file in your workspace (standalone project) to configure the serial terminal correctly for successful communication with the Demonstration Kit. When the demonstration runs successfully, gyroscope output samples can be seen on the terminal window. 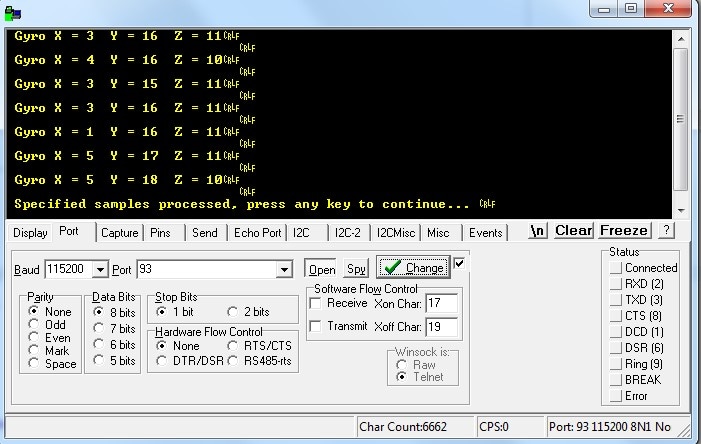 4.1 The MCUXpresso IDE creates a standalone project folder (size < 5 MB) for the chosen project under your workspace folder: 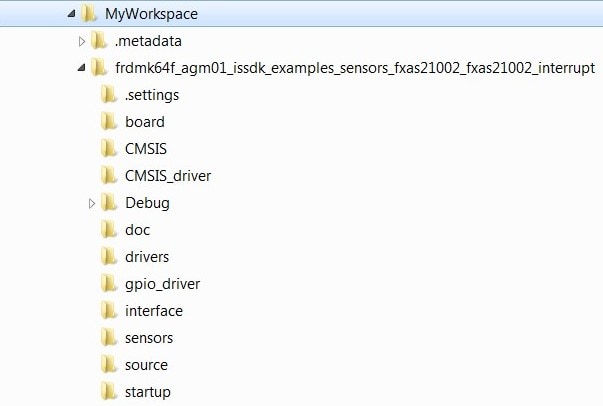 Open the project from the folder with the desired IDE and start developing a custom application.