Automotive Radar Evolves: NXP Fuels the Take-Over of Sensors with Our TEF810X Transceivers

With the accelerating ramp up of 77 GHz automotive radar technology, NXP has achieved a major milestone and simultaneously is developing a new packaging option for power/thermal intensive radar applications.

For automotive radar applications, the switch from the 24 GHz to the 77 GHz band is well in motion. For some applications, like front radar, the move was kicked off a few years ago. Many new cars today already have these sensors built in their applications like adaptive cruise control (ACC), or automatic emergency braking (AEB).

Process innovation — and especially the move to CMOS technology — is accelerating the growth of the 77 GHz market by ramping up the use of 77 GHz corner radar sensors. It would be hard to overstate the difference in corner radar precision achieved by the switch to 77 GHz – and the inherent design advantages.

77 GHz allows the ability to improve a radar sensor’s range resolution and object detection down to approximately 5 cm cross sections.

This change translates to potentially up to 25x improvement in range resolution, determining how far apart objects need to be before they are distinguishable as distinctly separate objects. This increase translates to better detection and tracking capabilities among tightly clustered, adjacent objects. The ability to discern between multiple objects (e.g., a vehicle and a pedestrian), becomes paramount for higher order, automated decision-making based on the known movement patterns and attributes of these two “object” classes. 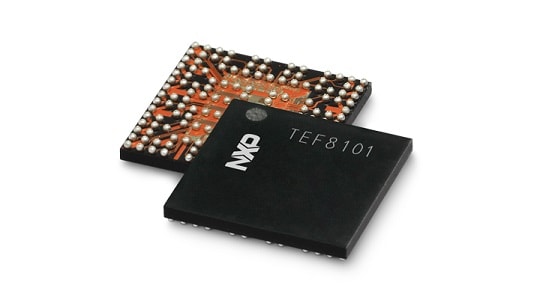 77 GHz improves a radar sensor’s range resolution and object detection down to approximately 5 cm cross sections. With this 77 GHz performance boost, typical front radar applications like ACC and AEB have been vastly improved and radar ranges have expanded much farther than what could have been achieved at 24 GHz.

This evolution to 77 GHz is now starting to strongly impact corner radar sensors, with significant implications for not only the sensors’ performance but also their overall size and cost. In addition to the mentioned radar sensitivity performance boost, the move to CMOS technology allows for smaller process nodes and hence higher integration, yielding in better cost optimization.

"It would be hard to overstate the difference in corner radar precision achieved by the switch to 77GHz – and the inherent design advantages."

NXP began production in 2018 and became the first in the industry to ramp up to volume output, and now has seven different product variants. We are proud to announce that our TEF810X family has been designed-in for major radar platforms at 12 out of the 15 leading automotive OEMs.

TEF810X has achieved promising traction in both the front radar and corner radar application markets, helping automakers prepare their fleets for the latest safety standards established by both NCAP organizations and consumer demand. Additionally, consumers benefit from the technical advantages that 77 GHz utilization and the evolution to RF CMOS bring to today’s market.

Ever since its release, TEF810X, has been contributing healthily to NXP’s record — over 100 million RF ICs have shipped to date. It will play an even more significant role in NXP’s radar future going forward, considering the design-in achievements discussed previously.

It goes without saying, that following the success of the TEF810X, NXP is further innovating on next generation CMOS transceivers. In that aspect, NXP proudly announces the development of an exposed die version of our TEF810X, targeted for higher performance radar applications requiring exacting thermal management capabilities.

The new exposed die package allows for direct contact to the die via the top side of the package for power-intensive, next-generation radar applications. This design innovation is targeted to counter demanding power/thermal challenges, while providing additional design flexibility for engineers moving toward 77 GHz radar applications. The new exposed die package is a first of its kind for NXP’s RF transceivers, and has already passed qualification for automotive standard AEC-Q100.

As automotive functional safety requirements evolve, the supporting radar transceiver technology must evolve as well. NXP is committed to continue leading the evolution to 77 GHz radar technology, and the pace of innovation must not slow down. NXP is accelerating it.

Carl Henning Cabos is the product manager for NXP's RADAR transceiver portfolio. He has worked at NXP for the past 4 years.

Automotive Radar and the Quest for Continuous Quality Improvement