Car of the Future Stella Starring in Singapore

Almost all new cars in the world contain at least one but often dozens of NXP chips. Our chips help improve traffic safety, but they also make cars lighter and more economical.

Update November 1 -Stella had the leading role in a press event. The media had been invited to the technical college in Nanyang Polytechnic to attend a presentation by Mr. Loh, Country Manager of NXP Singapore, on how NXP’s smart solution can help enhance livability in mega cities such as Singapore and a speech by the Dutch ambassador, Mr. Werner, on the relationship between Singapore and the Netherlands. 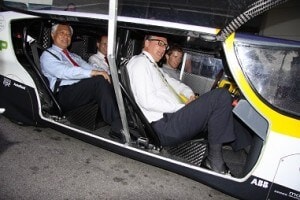 Lex Hoefsloot, Team Captain of Solar Team Eindhoven, spoke about the 2013 World Solar Challenge in Australia and the characteristics of Stella. Hereafter Mr. Penno, NXP’s regional Sales and Marketing Director, explained NXP’s Car2Car technology and how an On Board Unit in Stella, containing the NXP ATOP chip, can help to make traffic safer. He invited Mr. Loh and the ambassador to go for a ride in Stella. Journalists and other guests were then also given the opportunity to do the same and experience how innovative and sustainable this family car is. 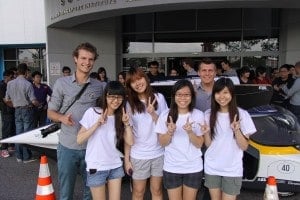 Stella was like a magnet for media and students. During the day, hundreds of students took thousands of pictures of Stella. There were journalists from Channel News Asia, the regional news network, as well as Singapore’s flagship English daily, The Straits Times, Top Gear Singapore and Singapore’s leading business publication, The Business Times.

Singapore Polytechnic had also competed in the 2013 World Solar Challenge and the team of 20 students from SP came to the event to discuss one on one with the Eindhoven University of Technology students on their experiences during the race and to examine the Stella to see how it was built.

Stella is not only the world’s first solar-powered family car, but also a real car to show NXP’s Car2Car and Car2infrastructure technology. For example the students have developed an interactive steering wheel that can shrink or expand depending on the traffic situation. 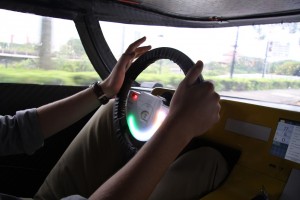 The wheel can be programmed in such a way that it will expand when the car is driving too fast, or shrink if a dangerous situation occurs. And because of the NXP Car2Car technology, such as Wifi-P and the ‘On Board unit’, Stella can also warn other cars about dangerous situations. To demonstrate Wifi-P NXP had two normal cars available for a demo ride in order to give the journalist the opportunity to experience how this technology can make traffic safer. We demonstrated e-brake and intersection collision warning on public roads close to the campus.

One of the questions asked was which chips are important for electric driving. Electric cars have to be safe of course, and NXP has developed smart chips to achieve this. All cars nowadays are equipped with an internal network, which allows messages to be exchanged between electronic modules in the car. High voltages are applied in the case of electric cars, and the chips that control this network have to be protected from possible short circuits (e.g. in case of an accident). NXP has developed special chips for this purpose (isolated CAN) that keep the network perfectly safe in case of an accident or malfunction. This way, NXP directly contributes to the safety of electric driving. 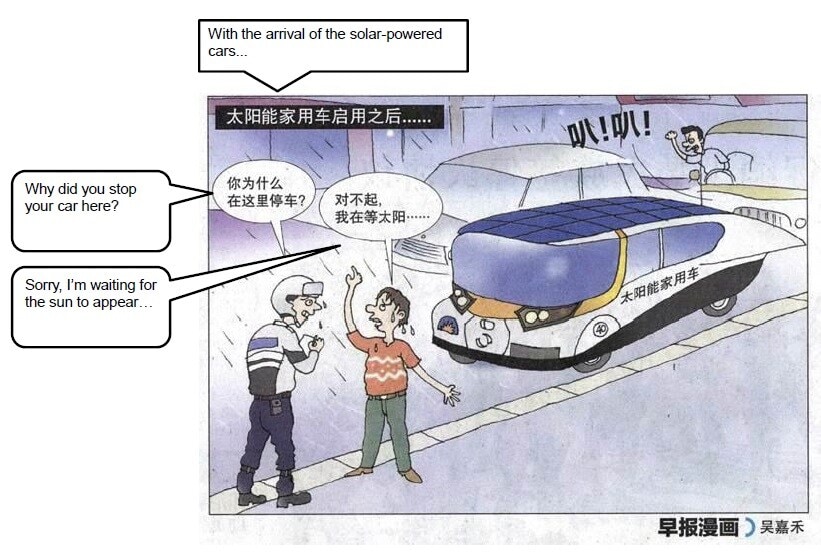 Update October 30 – During the Asia Future Energy Forum & Exhibition (AFEF) and Asia Smart Grid (ASG)/ Electromobility Conference, leading companies in the field of energy, sustainability and smart grids are demonstrating their latest inventions and solutions. In collaboration with several Singaporean universities, NXP is demonstrating how its wireless connected sensors are contributing to Green and smart buildings. 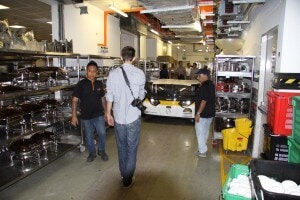 For the students of  the Eindhoven University of Technology, this is the place to be with their solar car Stella. The Dutch employers’ association FME, responsible for the Dutch Pavilion at the exhibition, had arranged that Stella would also be showcased near the pavilion. A logistic obstacle was that the exhibition takes place on the fourth floor of the expo center, but fortunately the car fitted right in the goods elevator. “I can assure you that getting Stella into the conference room was a once in a lifetime experience”, says Stella-driver André Snoeck. “Driving through the kitchen of this huge complex while 20 Singaporean cooks are telling you how to drive, is not a daily routine.”

Wouter Leibbrandt, Manager Advanced Applications Lab at NXP Semiconductors Eindhoven, gave a presentation on ‘Secure Connections for a Smarter World’ in relation to Smart Grids and Smart Sensors.
We are accustomed to solar panels on roofs and windmills to generate clean energy, but what if our car could generate electricity when parked? As the typical average driving distance in Singapore is under 40 km a day, Stella could generate more energy with its solar panels than it would consume for driving. Unlike electric cars, solar cars can: 1) charge from the grid, 2) store energy from the grid and 3) provide energy from its solar panels to the grid. If we want to manage solar cars combined with home grids, we need Integrated Circuits (IC) to control the appliances, radio chips for wireless communication, secure elements for tamper proof security and connected NFC tags for easy commissioning. These functions are being combined and integrated on NXP ICs. 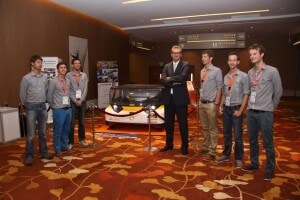 During the network reception this afternoon, 4-seater Stella received a lot of attention from Dutch ambassador Jaap Werner as well as from representatives of various Asian and European companies. Once again the gold winning students were congratulated on their fabulous performance during the World Solar Challenge. Roy Cobbenhagen, Technical Manager of Solar Team Eindhoven, noted: “Solar powered vehicles are not as widely known in Asia as in the Netherlands, so people are often more surprised and overwhelmed by the fact that it is possible to drive a solar powered family car in normal daily use.”

Update October 28 – After students from the Eindhoven University of Technology won gold in the Cruiser class of the 2013 World Solar Challenge in Australia, a part of Solar Team Eindhoven together with Stella safely arrived in Singapore yesterday. On today’s agenda are ‘meet Stella’ events for employees and one of NXP’s biggest customers. 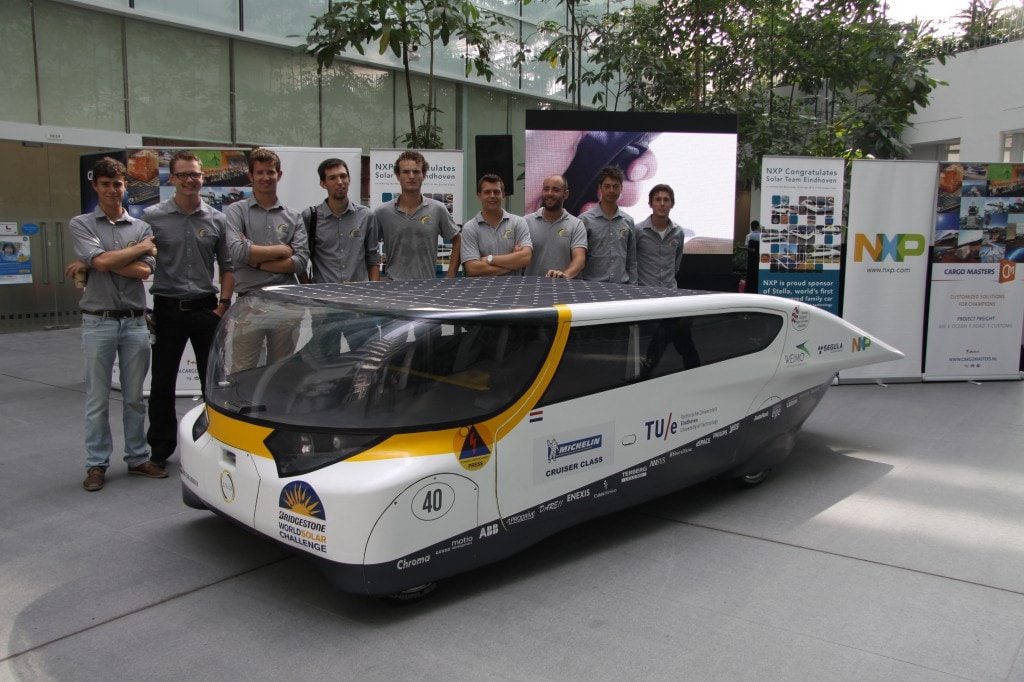 Singapore is a mega city on a relatively small piece of land. This means that Singapore constantly has to develop new technologies to solve mega city problems, such as traffic congestion, pollution and energy consumption. Innovations and measures to allow the community to function as efficiently as possible, play a very important role. Singapore was among the first countries to introduce road-pricing. In many areas, such as ITS, Singapore is an exemplary role model in the region. That is why NXP invests a great deal in R&D in Singapore, and wants to demonstrate its smart solutions that can help enhance livability in cities and contribute to a sustainable and safe society. Stella is world’s first sustainable family car that does not pollute and on average even generates more energy than it uses, especially in a sunny city like Singapore. The car is energy-positive, so it contributes to a reduction of CO2 emission and therefore to a better environment. In addition, Stella contains a great deal of NXP technology that can help improve traffic flow and safety.

Why is NXP sponsoring Stella? 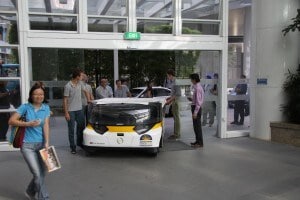 Almost all new cars in the world contain at least one but often dozens of NXP chips. Our chips help improve traffic safety, but they also make cars lighter and more economical. Furthermore, they allow drivers and passengers to enjoy their car infotainment system. NXP mainly develops, devises and manufactures smart applications for passenger cars. Because cars have to last a long time and it takes years before the design of a new model is actually ready for manufacture, NXP is constantly shaping automotive future. We have a vision of the car of the future. So when students from the Eindhoven University of Technology came to us with the plan to manufacture a solar car that is suitable for 4 persons, can take part in regular traffic – meaning that it meets all the government demands with respect to cars regarding safety and comfort – and moreover is clean and sustainable, NXP was immediately enthusiastic. Stella is a concept car that allows us a glimpse of the Automotive future. 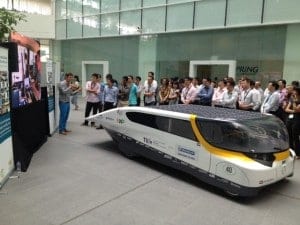 Quite soon after the first presentation of Stella in Eindhoven, the Netherlands, the idea to demonstrate this unique car to the media, important customers and NXP employees in Singapore started to take shape. After all, Singapore is on the route back from Australia to the Netherlands; it is an important gateway to Asia and an important city for NXP. That is why it was decided to let Stella take center stage during a number of events. The first event took place this Monday for employees of our Singapore office. Early in the morning Stella was unloaded and driven into the entrance hall of the NXP Solaris office building. There the notable solar car soon became the center of attention of employees and visitors. 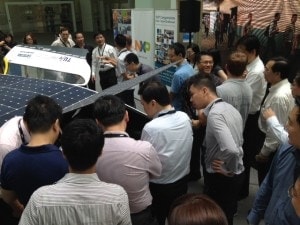 During the entire morning, our colleagues had the opportunity to admire the car. Members of Solar Team Eindhoven showed various videos about Stella and their winning race in Australia and soon were quite busy answering questions about the World Solar Challenge and the application of our technology in this family car of the future. Remi, who presented the story of Stella to the NXP employees, was very enthusiastic about the reactions: “It is absolutely clear that NXP employees are engineers. They were very interested in all the technologies in the car, not just in her looks.
I think we have convinced them that Stella has the potential to be the car of the future.” He proudly adds and with doubting modesty: “For me it is also very special, my first presentation as World Champion!” 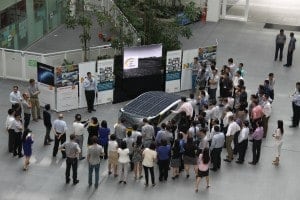 At the end of the morning, a delegation of one of NXP’s biggest customers was welcomed by Karsten Penno, Director Regional Sales & Marketing, Automotive & Transportation. Karsten spoke about the Car-to-Car technology in Stella, and how it can be applied in Singapore.
Thereafter, the Eindhoven students and our Singaporean Automotive colleagues started to program and test demos in Stella, in preparation of the coming press event. Joep, who is the lead Signals and Control engineer of Solar Team Eindhoven, explained: “During the 2013 World Solar Challenge we used Cohda’s Wireless Car-to-Car technology to transfer important parameters of Stella to the Strategy van. Today we’ve added the feature to show warnings and matching sounds prior to dangerous situations on the road. We are convinced the car of the future can make more of Car-to-Car communication.”