Since I can remember, I have been interested in designing amateur radios.  As a radio enthusiast I received my radio amateur license and got in touch with the AMSAT (AMteur SATtellite) community, which focuses mainly on establishing contact via home-made satellite radios. Their focus is limited, because designing for aeronautics and space undertakings is expensive and usually have to comply with exceptionally high standards. Therefore, such projects are usually done on a global scale.

After finishing the repair of three city repeaters in Venlo, the Netherlands, I was looking for a bigger technical challenge. I came across the linear satellite transponder, a device which is not particularly well-known by most people. However, I thought working with this transponder could really be the challenge I was looking for! 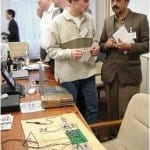 A linear transponder can support multiple stations at the same time, and in different kind of modes, such as FM, AM, Morse code etc. However, information on linear transponders proved very hard to find and was not exactly detailed. The best way to learn more about the transponder, would be to create one myself. To eventually create a working transponder took me several years and more than 8 prototypes passed the design table to get a working UHF to VHF linear transponder design.

When the transponder was finished and working, the AMSAT-DL symposium asked me to give a presentation to elaborate a bit more on design details. This was a great opportunity to get in touch with AMSAT satellite designers and to get some technical feedback. Unexpectedly, someone from AMSAT-India on behalf of ISRO approached me with the question:

”Are you willing to send your prototype transponder for testing on an Indian satellite?”

That is how I got connected with the Indian HAMSAT project. Two weeks later the transponder was tested in India by ISRO (Indian Space Research Organization). It passed all tests, although current consumption proved too high at 12V. A solution was found in using an 28V main supply, which can handle higher power. The original transponder design was adapted and manufactured within two weeks and re-sent to ISRO where it passed all final tests. This model became the final flight model which is currently in orbit. 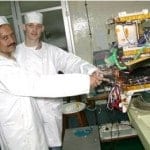 This decision meant that the transponder I created back home was going to fly in space. In the months that followed, the satellite was assembled and tested. A couple of weeks before the proposed launch, I received an urgent message from ISRO that they encountered problems when turning on the transponder during thermal vacuum testing. With the risk that the radio would not be part of the space mission, I interrupted my holidays in South-America and flew to India to help test the transponder at ISRO.

I closely worked with the ISRO engineers for 5 weeks in search of the problem. Eventually, we found that the problem appeared to be sparking in a high Q cavity filter when the transponder was turned on, as my transponder provided slightly more power than the original Indian transponder.

Ready for take off On May 5, 2005, the satellite was successfully launched from Shriharikota, India, and ground station confirmed that all systems, including the transponder, worked perfectly. However, radio communications were still performed with the primary Indian transponder. 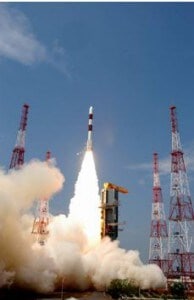 Over the next 6.5 years, this Indian transponder provided radio communications to the international radio amateur community. However, in the beginning of 2012, this Indian transponder stopped working. Investigation by ISRO showed that the satellite was still in excellent condition, but because of the hiccup it was decided to switch over to the secondary payload, my transponder. After 6.5 years I could “hear” my radio again via my amateur receiver at my home, which gave me a feeling of seeing an old friend.

The following NXP (or Philips at the time) parts are used in the transponder: