Predicted to hit $17 billion by 2024, the commercial drone market is already proven with uses that increase public safety and business and government efficiencies. Drone-generated data helps mining companies model inventory and measure movement of materials. Police departments use them to monitor crowds. Farmers use drones to examine crop conditions for disease and yield. Insurance companies assess storm damage on homes and buildings. Engineers use them to inspect bridges and wind turbines.

As the commercial drone market takes off, we’ll see regulatory requirements evolve and adapt. Much like safe, connected and autonomous cars, drones will be required to have higher reliability, functional safety and security. Furthermore, seamless communications and secure authentication will be critical. 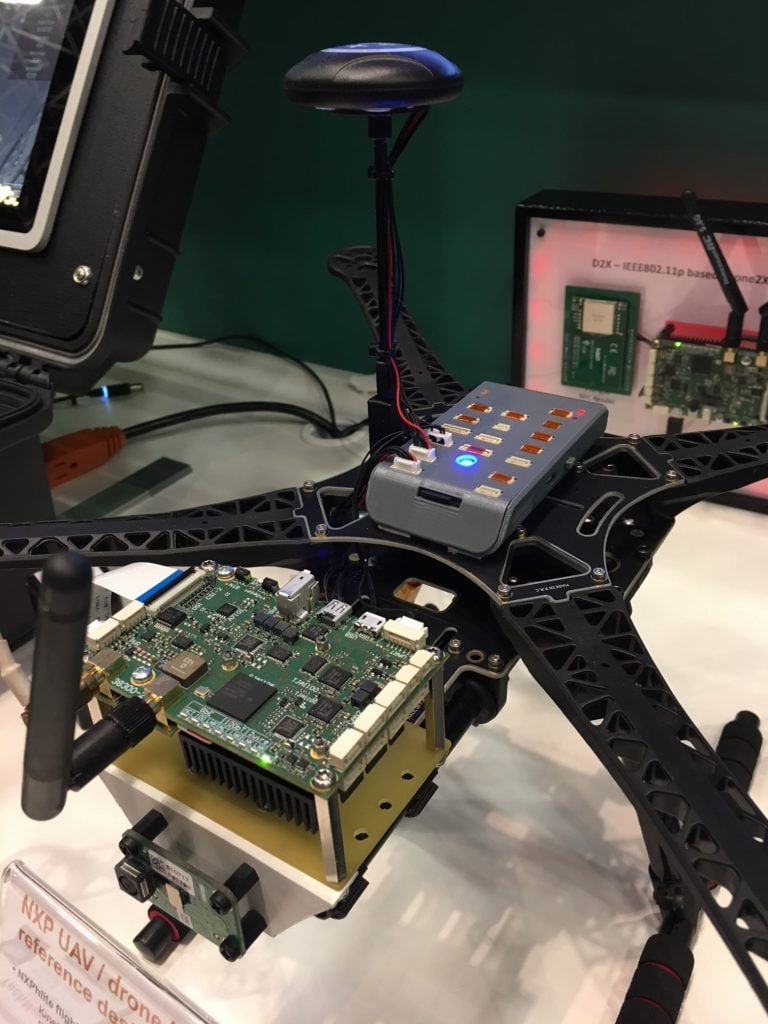 “Open source,” “safe” and “secure” all top the list of drone requirements, according to developers at InterDrone last week where it was announced that NXP was a new Dronecode member. NXP will bring its safe, secure automotive grade components for drones to the ecosystem, including a Flight Management Unit that runs the PX4 flightstack. Pictured above, our relentless researchers are testing IEEE 802.11p-based V2X communications technologies on drones.

Dronecode: Leverage the power of the crowd
Why start from scratch and build apps that have already been built? To help commercial drone developers tap into the market opportunity and achieve faster development cycles, NXP became a gold member of Linux based Dronecode, the leading open source platform for UAVs.

With Dronecode, developers leverage the “power of the crowd.” With so many eyes on the code base, it’s reliable and secure. And with an active community, bugs are fully transparent, understood and resolved. You have freedom to customize to your specific needs, without locked-in limitations of proprietary software. And, best of all, Dronecode is very business friendly with its BSD license.

Why are auto-grade components important for commercial drones?
It’s clear that commercial operations will be running beyond visual line of sight (BVLOS), which requires functional safety and secure authentication solutions. This is where automotive components become a game changer.

Experts from Auterion, Dronecode and more, weigh in.

NXP’s automotive and industrial technologies power cars today and drive autonomous vehicles of the future – and those same technologies are used for industrial drones, rovers and other small autonomous vehicles. Now, with Dronecode, you get the power of the crowd with code re-use and code transfer to other applications. Start with us now, and build with us in the future.

Iain Galloway, P.Eng., holds an Electrical Engineering Degree from University of New Brunswick, Canada, and has more than 25 years of hands on experience as an electronics embedded designer and field support engineer. You can connect with Iain on Twitter at @iafgalloway.