NXP and the Evolution of the Car Key

The car key has come a long way since its humble beginnings. Those familiar with vintage slapstick comedy will recall that early cars did not have ignition keys, but crank handles that could often cause broken wrists! 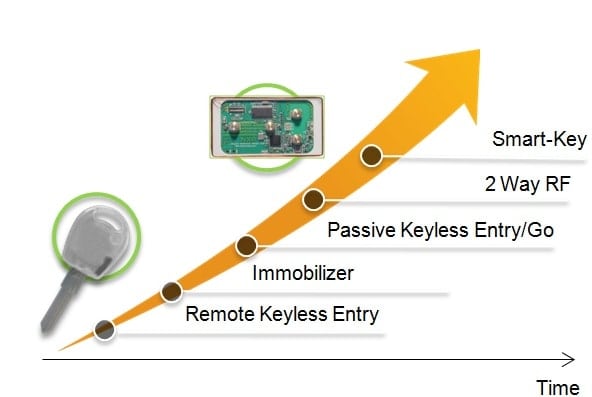 It was not until 1916 that car manufacturers began to utilize the key, instantly making cars safer and easier to start. The first remote keyless entry solutions – fobs to lock or unlock the car doors by simply pressing a button – appeared in the early 80s. In the early 90s, the electronic immobilizer was finally invented.

Recent requests from car manufacturers in the past decade ask for new inventions: smaller, feature-packed and stylish!  Aside from the usual opening and locking functions, key fobs are now expected to provide keyless ignition, panic buttons and check fuel levels, along with a whole host of other attributes.

Today, NXP has announced the next step in this evolution; the world’s smallest combo chip solution for automotive keyless entry with immobilizer functions. NXP has reduced the size of previous generations by a massive 44%, demanding only 4-mm x 4-mm of board space and providing key manufactures with maximum design freedom for distinctive design. 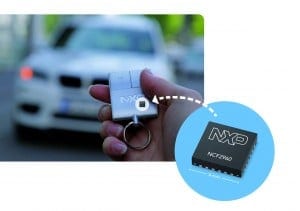 In keeping with NXP’s position as a market leader and innovator in this field, the diminutive chip solution is packed with features, such as stabilized FR output power, frequency hopping and AES encryption. Without compromising on performance, the integrated solution maximizes the reliability of car keys in environments suffering from RF jamming and solves the problem of instable output power that suffered by conventional devices.

Thanks to NXP, the global number one supplier of immobilizer and keyless entry semiconductors, the evolution of the car key continues. Who knows what the next ten years might hold!

Birgit is the VP of Global Marketing and Communications at NXP. Throughout her tenure at NXP, she has witnessed the significant impacts of NXP’s innovations and has driven strategic initiatives to share this with the world. She is a technology enthusiast and is passionate about connecting the dots on the latest breakthroughs and identifying the unique stories behind them.