An Order of Magnitude: Launching the Gigahertz MCU Era

Over time, advancement for general purpose microcontrollers has essentially been… incremental. Traditionally, microcontrollers are built in older, lower-cost wafer process technology nodes and come with a common set of peripherals and I/O when delivered to the market. These chips have been providing engineering manufacturers with just enough capability to glue together their embedded systems for decades. But, over the last few years, NXP’s crossover MCU, which blends attributes of advanced processors with those of simple microcontrollers, has been game-changing.

Before getting into the details of what the i.MX RT1170 delivers, let’s review how the breakthrough aspects of the device are achieved. There are a few things to note:

The i.MX RT1170, now the eighth family introduced in the series since 2017, follows a solid line of predecessors with great market success. Meaning the infrastructure is in place as well as software, tools, application notes and strong partnerships. By the time the i.MX RT1170 device is released broadly it will be highly enabled by the crossover MCU ecosystem and indeed as simple to use as a microcontroller. Previous i.MX RT devices topped off at an industry best 600MHz CPU speed, but based on customer needs and feedback, the RT1170 MCU has been enhanced to meet the demands of the market for more processing bandwidth.

Coupled with its ease of use advantages, the i.MX RT1170 device is built using 28nm FD-SOI—making it NXP’s first MCU built in this advanced technology node. The advanced technology is central to the level of integration, performance and energy efficiency which can be achieved on the chip. With the attributes of 28nm FD-SOI technology, power efficiency is realized for both shut-down states as well as when the processor is running. This is highly advantageous for low energy designs that require a mix of computation as well as sleep modes to save energy. To take advantage of the technology, the microarchitecture of the i.MX RT1170 device includes both the high performance Arm® Cortex®-M7 CPU with a power optimized Arm Cortex-M4 core. Working together, the multi-core architecture extends the inherent advantages provided by the technology, allowing system designer the tools they need to highly optimize their designs.

So, what aspects of the i.MX RT1170 family are breakthrough? As shown in the high-level block diagram below, there’s plenty to highlight. First, there is the compute performance. Unlike a typical microcontroller operating at around 100MHz, the i.MX RT1170 device is the world’s first broad market Gigahertz MCU. That means that it is operating at ~10x the typical microcontroller speeds. With nearly limitless computational power, decisions made on the edge will happen faster. Developers will no longer be confined by traditional constraints and are free to innovate like never before. Related to machine learning algorithms, the Gigahertz processing will shorten inference times and support higher accuracy for a broad range of applications. 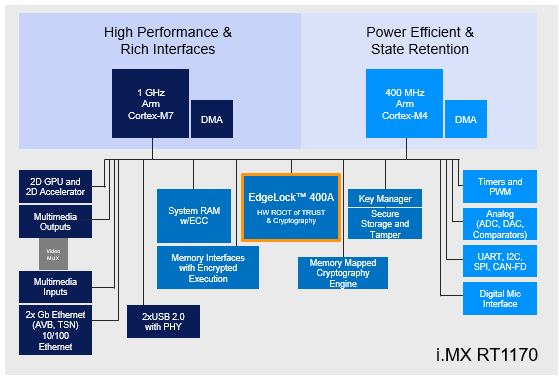 Second, the peripherals within the chip are generations ahead of what would normally be available on an MCU. For both the physical interfaces and the on-chip accelerators, the i.MX RT1170 device will be first in its class with regards to integration. With two Gigabit Ethernet blocks and an additional 10/100 Ethernet, the wired connectivity options will allow it to act as the processing gateway for systems as complex as robotics and unmanned vehicles. In addition to the communications interfaces, the i.MX RT1170 device includes 2D GPU and accelerators as well as multiple image building graphical display units. With the standardized MIPI-CSI interface, camera data can be easily captured. The integrated video mux allows for cost-saving memory optimization as it can pass the image data directly to displays without the need of DRAM space. In addition to the ground breaking interfaces are all of the standard serial peripherals, analog inputs and timers one would expect for an MCU. In the off-chance that there is a missing peripheral, the dual FlexIO blocks allow for more parallel or serial interfaces on the chip.

Finally, there is the security. Matching with the present-day threat landscape related to the cybersecurity of embedded systems, i.MX RT1170 device is NXP’s first chip to offer hardware root of trust protected by the EdgeLock™ 400A security sub-system. Managing the root of trust for secure boot and hardware unique keys, EdgeLock 400A establishes the basis for a secure embedded design. The cryptographic accelerators integrated on the device support advanced key sizes including acceleration for SHA-512 and large elliptical curve cryptography. In addition to the EdgeLock, the chip includes a number of integrated capabilities allowing for secure communications and encrypted execution from memory. The key manager block and associated ROM-based support will make security easy to use and easy to deploy.

Time will tell how the capabilities of this family will be amplified when integrated into final devices. Working as a systems designer on the NXP solutions team, I am ecstatic about the opportunity to explore its limitless opportunities of the Gigahertz MCU era.