Axel Engelhard: In the Driving Seat

Axel Engelhard is a System Engineer at NXP Germany, focused on in-vehicle networking. He started off as a working student in 2015, completed his Master thesis and then joined the now defunct Automotive Leadership Trainee Program (ALTP) in 2017. We sat down with Axel to chat about his journey, transitioning from working student to full-time employment, his passion for engineering and more. 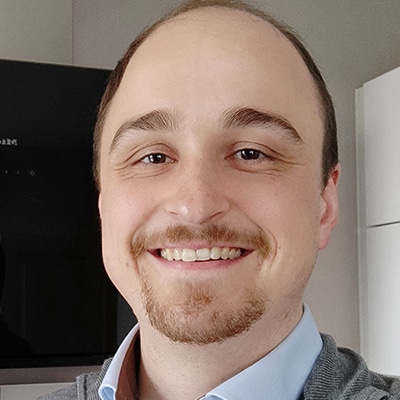 NXP: Axel, let’s talk a little bit about your background.

AE: Math and Physics were always my favorite subjects in school, and from the time I was little, I was passionate about cars! So studying engineering appeared a good way to combine both passions!

NXP: Makes sense. How did you end up at NXP?

AE: In 2011, I was a founding member of the Formula Student team “e-gnition Hamburg e.V.” at Hamburg TU. Back then, we had also decided to build an all-electric race car. NXP got excited about it and decided to sponsor it. Through the sponsorship and the contacts established with NXP engineers, I landed my first gig as a working student before moving into a full-time role!

NXP: What were the decisive factors for you in choosing NXP?

AE: During my stint as a student, I liked the work culture at NXP. The former ALTP program was also a big draw, as it offered job rotation and networking possibilities combined with soft-skill training and getting valuable feedback from other trainees.

NXP: How was the transition from being a working student at NXP to a full timer?

AE: It was a bit of a jump into cold water as I moved to Munich in 2017 on fairly short notice for my first ALTP assignment. At the time, the merger with Freescale was still quite fresh, so it felt like a great opportunity to explore another company without actually leaving. Afterward, I returned to Hamburg for my second ALTP assignment that turned into the position I’m working in today, only with growing responsibilities.

Discover opportunities for students and new graduates at different locations in NXP.

NXP: What have been some of your biggest learnings on the job?

AE: Tons! Especially when it comes to cultural awareness, managing time and expectations, and also recognizing the beauty of heterogeneous teams with varying experience levels. While growing “on the job” into my current role as System Architect within an NPI project, I realized how a beginner can also add value to an experienced team. When you’re a rookie, you can get away with asking seemingly simple questions, which may turn out to be very good ones that help a project identify blind spots. Somebody needs to think outside the box from time to time and question the status quo!

NXP: And what are the biggest challenges that you’ve faced?

AE: Coming to terms with the fact that I only have a limited amount of time. So at some point, I cannot partake in any interesting discussion or topic anymore due to existing and more pressing responsibilities. I suspect this challenge will remain throughout my career.

NXP: As someone who knows the drill, do you think NXP is appealing enough for young recruits?

AE: NXP is doing a great job! Personally, I really enjoyed starting my career with a trainee program and I can imagine that this would attract other young grads as well. But if I may suggest, perhaps we could add some foosball tables in the office to appear a bit more cool!

We're looking for innovative, passionate and talented people like you to join our team. Learn more about our hiring process and open positions at NXP Careers.

AE: Ask questions to your senior colleagues or managers. How they ended up in their positions, what challenges they experienced and how they overcame them. Don’t shy away from asking for support and guidance, nobody expects you to know everything immediately.

Fatema Imani works in Corporate Communications at NXP. She is also writing her thesis as part of the Erasmus Mundus Masters in Journalism, Media and Globalization programme. Previously, she worked as a journalist in Pakistan.

Sneha Dhar: We Put People at the Heart of Everything

Engaging Our Teams Through Inclusion Insights