Following a successful demo at the Máxima Medical Center in the Netherlands, a team of young students at TU Eindhoven (TU/e) seem on course to develop the world’s first autonomous indoor drone – project name ‘Blue Jay Eindhoven’. The dream is to see their drone support healthcare professionals across their work. This is largely uncharted territory, both in drone technology and healthcare and here the students and some of the drone experts championing their groundbreaking work discuss the technological challenges the project faces.

“Nowadays, making a remote drone is easy,” says Professor Maarten Steinbuch, head of the High Tech Systems Center at TU/e. “But a drone that’s genuinely autonomous in a confined 3D space needs smart electronics and the capacity to respond fast to what’s happening around it. For example, if someone in the room suddenly stands up, the drone has about 50 milliseconds to see that movement and respond appropriately. It’s a huge challenge.” And just one of many.

The drone’s close proximity to people also throws up safety issues, especially when it’s elderly and sick people. One revolutionary design feature of the Blue Jay is the cage frame and rotors casing, which shield the mechanism and ensure that, in normal activity, a user’s hand won’t come into contact with any moving parts. Important when the blades are doing some 12,000 rpm. Let a finger stray in there and you’ll be adding to a hospital’s workload, not reducing it!

Meanwhile, to address a more immediate safety problem during development, the team has erected a network of steel cables in the Blue Jay workspace so the drone can’t ‘escape’. “The last thing we need is a rogue drone loose on campus. Especially one that can think for itself!” jokes Rens Nieuwenhuizen, mechanical engineering student and one of the team’s current full-time members. 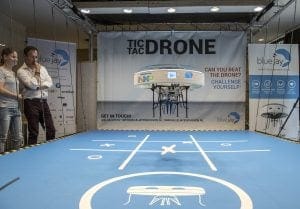 The drone’s flight time is currently about 6 minutes. That may not seem long, but as the team have learnt, product development is all about weighing up priorities. “We need to balance time in flight against the extra (rechargeable) batteries that requires,” explains Rens. “Extra batteries make it heavier, requiring more thrust, which in turn make the drone noisier.” And as Maarten points out, “No one wants a noisy indoor drone, especially in a hospital.”

Another rule of product development is keeping things simple. “We were having real problems with vibration,” explains electrical engineering student, Iris Huijben, another full-time team member. “Initially we thought the flight controller wasn’t tuned well enough, then realized it was simply the legs vibrating too much. We solved the problem by using good-old duct tape to stabilize the structure.”

Simple, too, is the modular design, which means Blue Jay can be taken apart and put together again. And most components, including the inner frame, legs and gripper, are 3D-printed, so any broken parts can be quickly replaced. 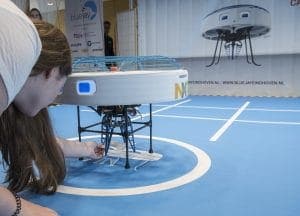 The students say Blue Jay isn’t really as ‘smart’ as they aim for yet, but the plan is to increase its artificial intelligence. For example, through more sensors in the ring, and additional algorithms for mapping and for learning from its environment. But even now, Blue Jay’s no dummy: playing games, it can decide its next move for itself. And last year in its first ‘student job’, working as the world’s original drone waiter in a pop-up student café on campus, Blue Jay used image processing to recognize items customers pointed to on the menu.

Another innovative aspect of the drone is its humanizing ‘face’, which has different expressions, for example, looking happy if it wins a game, sad if it loses. But even aesthetics considerations go hand-in-hand with technical ones. “For the face,” says Iris, “we created some nice white fabric that framed the eyes much better than now. But the fabric covered open areas, causing the drone to vibrate and drop in flight.” The team are still working on how to use the fabric to create a more realistic face without compromising the flight.

Hovering above the shoulders of giants

Talented though they are, the Blue Jay team couldn’t do it without world class support. Their base, TU/e, has a global reputation in robotics — indeed Maarten Steinbuch’s team are reigning Robot Soccer World Champions! — and is a hub of the region’s rich technology legacy, which includes global tech leaders like Philips, ASML and NXP, that makes Eindhoven a serious rival to Silicon Valley.

With a strong track record in car connectivity and UAVs, project partner NXP is particularly closely involved with Blue Jay. “In the project’s first year, for example,” recalls Iris, “we kept getting signal interference and everyone had to turn off their mobiles during testing. But using NXP’s technology, interference is no longer a problem.” Ties van Loon, the project’s leader, concurs. “It’s great being able to work directly with NXP colleagues. Their expertise and experience are invaluable. Sometimes the answer’s something simple we’ve overlooked. But having worked in this field for years, they spot it quickly.”

Looking forward, Drone Programs Technical Lead at NXP, Iain Galloway, is excited about the many ways his company’s technology can continue to benefit Blue Jay. “Take security. If, for example, a drone is delivering medication, you need to know it’s the right drone going to the right nurse or patient. Using a challenge-response encrypted communication exchange between recipient and drone provides a secure chain of custody similar to Internet banking.” No bad thing, when of course delivering prescribed drugs to the wrong person could have consequences way beyond just delivering the wrong groceries.

“When we saw the drone café in the news last year, we immediately saw value in a collaboration” says NXP’s Gino Knubben. “But NXP is learning a lot from Blue Jay, too. Drones, robotics, autonomous, flight controllers, car connectivity… they’re all very closely interrelated. And progress on one front can help on all many others.”