At Tarwater Elementary School   in Chandler, Arizona, students recently spoke with astronauts on the International Space Station via Amateur Radio. This activity is part of the amateur radio on the International Space Station (ARISS) program, promoting learning opportunities as part of the STEM (Science, Technology, Education, and Math) initiative.

ARISS is managed by an international working group, including several countries in Europe, as well as Japan, Canada and the United States. Volunteers run the organization from the national amateur radio organizations and the international radio amateur satellite corporation (AMSAT) organizations from each country. They provide the equipment and operational support to enable direct communication between crew on the ISS and students. Since ARISS is international in scope, the team coordinates locally with their respective space agency.

The ARISS-US program opens proposal windows for applicants from the United States twice a year to schedule radio contacts with the ISS, 6-12 months in advance. Tarwater Elementary School is only one of seven schools in the US selected to contact the ISS this year. It was an infusion of amazing students, staff, administration and parents who made this experience of a lifetime possible.

The school’s STEM lab opened in 2017 and has become a hub for all grade levels to experience hands-on learning. The school has prepared for the ARISS contact by incorporating various NASA and amateur radio content into their STEM lab activities. These activities include science experiments to investigate and explore the nature and properties of radio waves. The questions students planned to ask astronauts on the ISS were generated based upon their yearlong learning and research of space and the ISS.

NXP’s Amateur Radio Club based in Chandler AZ coordinated the ISS contact event. The amateur radio ground station uses the radio callsign W7MRF and the ISS used NA1SS. It is operated by two NXP engineers, Lionel Mongin F1JRD/KW7MM and Jim Davies K7JFD. Both have been ham enthusiasts and active participants in amateur radio since the early 1990s. Jim Davies, President of W7MRF, explained that the ground station uses RF transistors designed in Chandler as part of the amplifier. 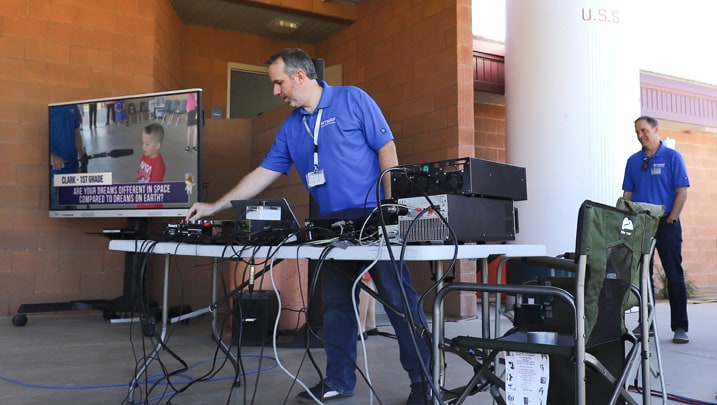 
"What ARISS is doing for students by introducing them to wireless technology and space exploration is inspiring. It is an honor that Tarwater Elementary School was selected to give an opportunity for all of us to learn about the world beyond."

The equipment comprises a VHF radio driving a 2 meter amplifier. Software is used to track the space station and adjust for Doppler effects. To explain, when there is relative motion between the wave source and the observer, there are changes in the observed frequency of a wave, which needs precise adjustment – especially considering that the ISS orbits Earth at an average speed of 17,500 mph and roughly 250 miles above Earth. For calculating when the ISS passes overhead, the software provided their exact geographic location and coordinates. 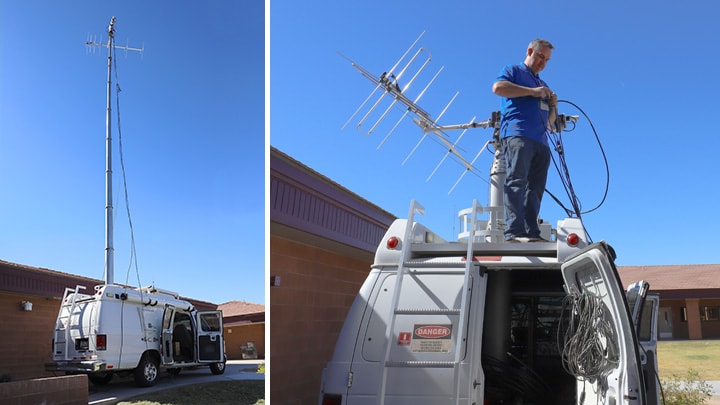 This information is then fed into a seven element, cross-polarized Yagi antenna located on the roof of a repurposed news van. It is controlled with dual rotators that adjust for both azimuth and elevation. Azimuth tells what direction to face, and elevation is how high up in the sky to look. Together, they ensure that the ground station is in constant contact with the ISS. In addition to all this equipment, the team has an independent battery-powered backup station running an ICOM 910H satellite transceiver and a small 4-element Yagi.

"We are pleased that some of our RF transistors that are designed right here in Arizona were used in our equipment. They made up part of the amplifier that the students used to talk with Astronaut Shane Kimbrough on the International Space Station."

In the days leading up to radio contact, the students were tracking and researching the ISS and the astronauts on board. Just before the scheduled radio contact, the NXP Amateur Radio Club was invited to speak at the school to give various demonstrations on the real-world application of radio waves. Students learned how a wave’s amplitude and energy are related, calculated wave speed, explored how waves change direction when they travel from one medium to another, compared various types of electromagnetic waves and distinguished between AM and FM modulation. 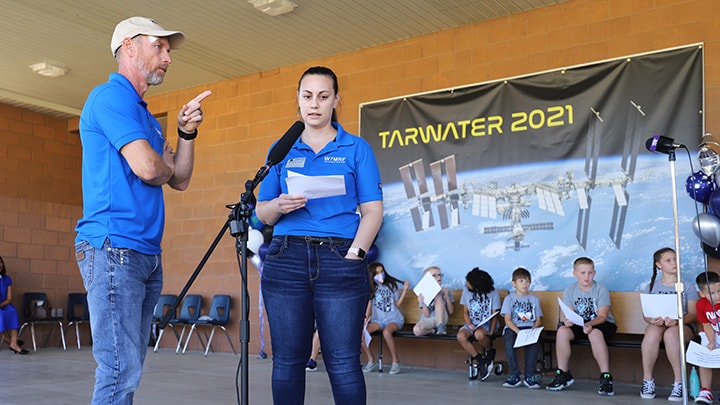 With a downlink frequency of 145.800 MHz, the NXP Amateur Radio Club connected the students with astronaut Shane Kimbrough (KE5HOD). The students had a host of questions to ask Kimbrough, with the entire school watching in the auditorium.

The first student to step up to the microphone was 6th grader Margaux. She asked: What kind of research are you doing on the Space Station?”

Speaking via the radio aboard the ISS, Astronaut Shane Kimbrough came over the speaker loud and clear: “We do all kinds of research up here, from plant research to medical research to fluid research and material research. All different types of sciences we get to do up here.”

Next up, wearing a NASA T-shirt, Clark from the first grade asked a thought-provoking question: “Are your dreams different in space compared to dreams on Earth?”

“Very good question,” said Kimbrough. “I haven’t had any different types of dreams up here. I think some of my colleagues may answer this differently, but, for me, my dreams here are very much like I have back on Earth.”

Hayden, from the 5th grade, then asked Kimbrough:” What is the most interesting or challenging thing that you have done on the ISS?”

“We’ve had a lot of things to do up here in the last six months that we’ve been on board,” he replied. “I think the hardest and most challenging things that myself and Thomas Pesquet, the French astronaut, got to do was a few spacewalks to install brand new solar arrays on the outside of the space station. It was really challenging – mentally and physically.”

An emotive question from Brody followed: “What do you miss most about home?”

“Brody, of course, I miss my family, but things you probably want to know are other things,” joked Kimbrough. “I miss feeling the weather and feeling the wind, and smelling fresh-cut grass and things like that. I also miss a shower!”

Asking a science question, Jules, from 2nd grade: “Where does the air you breathe come from?”

What to Pack for a Space Mission

Delving into Kimbrough’s personal life, Bryson asked: “What type of personal items do you bring with you?”

“Well, I brought a lot of things,” said Kimbrough. “We’re lucky enough to bring some things. Things I usually bring are pictures of my family and some jerseys or T-shirts from my colleges, universities and high schools that I went to – things like that. And, if you have anything special from maybe your family members or friends, you bring a few of those things as well.”

Representing the school’s Kindergarten, Easton asked a food-related question: ”Which do you like more, regular ice cream or space ice cream?”

“Great question,” replied Kimbrough. “There’s no contest there, regular ice cream for sure. We actually got sent some regular ice cream a few months ago on one of the cargo vehicles, so we got to eat it in space.”

Asking another science-related question was Elyse, from 5th grade: “How do light and sound travel in space?”

“Well, Elyse, I can only answer that from my experience here on the International Space Station and, on board here, it travels just like it does back on Earth – the light and the sound. It is different when you’re outside in the vacuum of space but I’m not smart enough to be able to answer that question.”

David from the 4th grade asked: “How do you know what day it is on the space station?”

Brooklyn from the school’s 6th grade asked an interesting question: “How does it feel when you come down from space? Do you feel dizzy?”

“Excellent point there, Brooklyn,” he replies. “Most of us do feel very dizzy because our sense of balance, which is in our inner ear, has been floating around for six months. So, when we get back to gravity, it’s trying to figure out where it is, and it usually takes a couple of days for us to regain our balance.”

Margaux’s second question was: “What happens if you encounter space junk or meteoroids? What are the procedures?”

“Thank goodness that we don’t have any of the big collisions up here, but sometimes we get close, and when that happens, we have great people in mission control teams around the world that can help us. If we see it early enough, they can actually move the space station out of the way, so we don’t hit the object. If it’s kind of late in the game, then we will just get in our spacecraft and kind of hunker down there in case something hits the space station. Then we can depart if we have to – then again, fortunately, none of that has ever happened. We get micrometeoroids that hit the space station quite often, and those are really, really tiny things that don’t puncture the space station, thank goodness.” 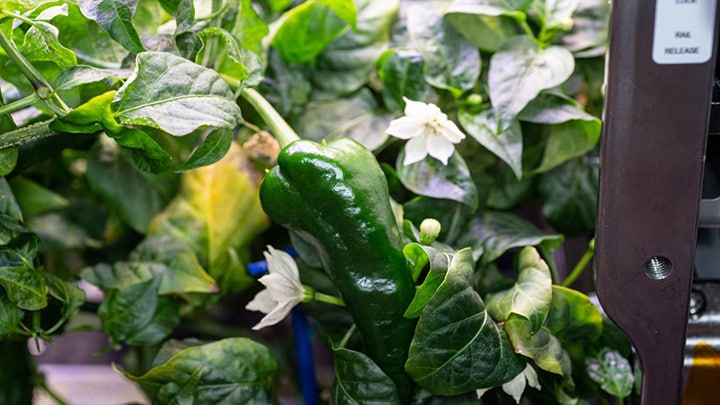 Clark’s second question was: “Do plants grow taller than usual in microgravity?”

“We don’t get to grow a whole lot of things, but I’ve been fortunate on my last two missions to grow lettuce. Right now, we’re growing Hatch chili peppers, and they haven’t grown any taller than normal, but they do grow really nicely up here – so we’re looking forward to harvesting these peppers next week and getting a chance to eat them. 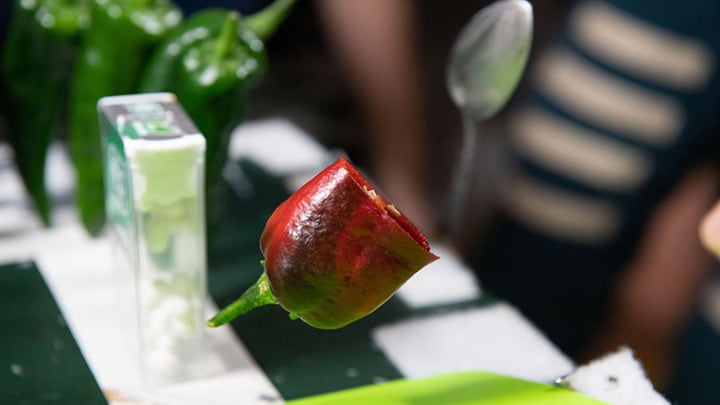 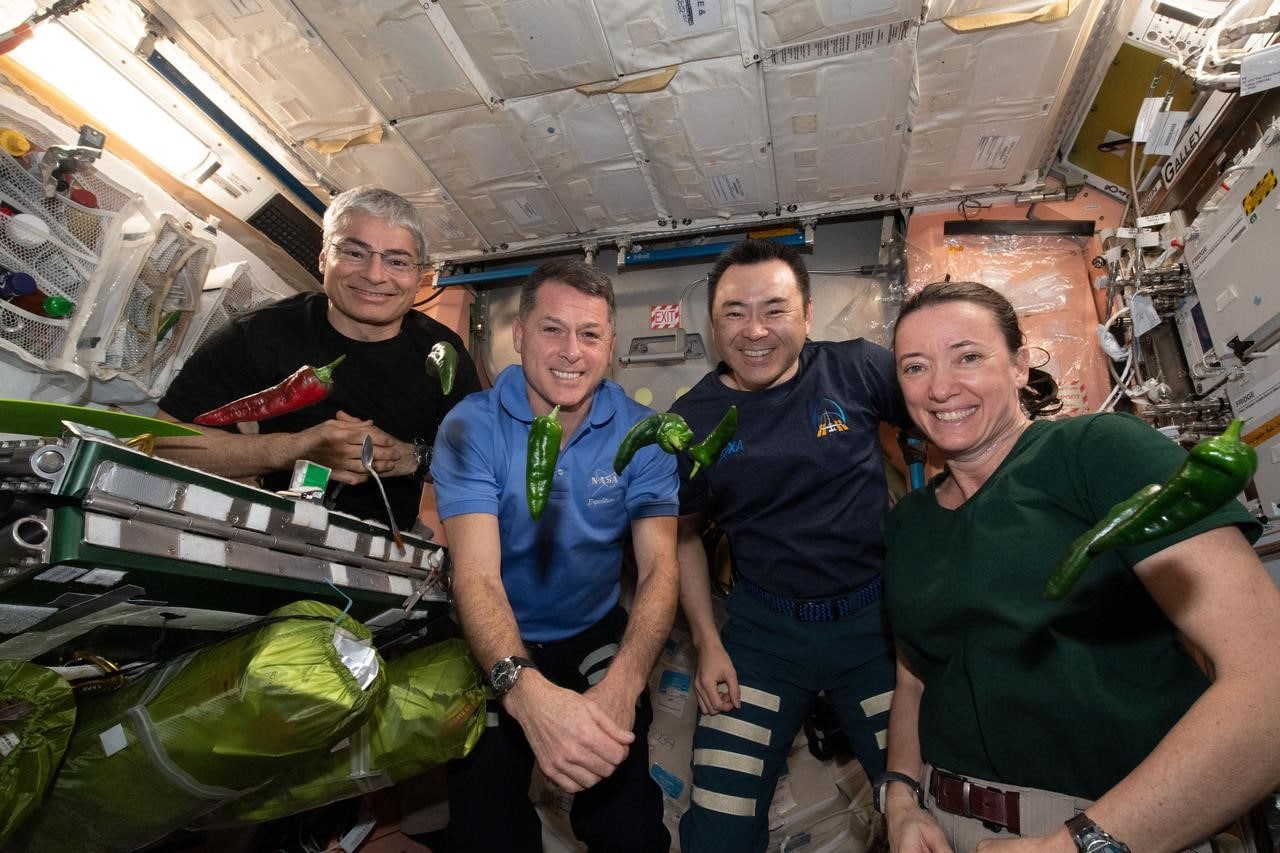 The crew on the ISS tasting their harvested Hatch chili peppers

Hayden’s second question was: “How often do you have to fix things at the International Space Station?”

“We fix things quite often actually; I would say daily at least one of the crew members is working on fixing something. That’s because this incredible International Space Station we live on has been up here for over 20 years now, so things break. Whether it’s electronic or plumbing, it’s always something different, but we’re up here with the help of the mission control teams to fix those things.”

Brody’s second question: ”What is the hardest part of your job?”

“For me, Brody, it’s just being away from my family and friends for really long periods of time. So, as I said earlier, we’ve been up here six months; we have another week or two to go, then we’ll get a chance to get back home to our family and friends.”

Since the interview, Kimbrough has returned to terra firma safely. NXP offers a huge round of applause to everyone involved in this event. Thank you NXP engineers, Lionel Mongin and Jim Davies for coordinating the contact and being great STEM ambassadors to Tarwater Elementary School.

"I really appreciate our NXP engineers Jim and Lionel for making this ISS radio contact so successful. It was great to see radio equipment that is powered by our NXP silicon. The event was very well coordinated with the students and Astronaut Shane Kimbrough."

Before joining NXP, Jim served 4 years on active duty in the U.S. Navy and then served 20 years in the Naval Reserves for a total of 24 years of service, retiring as a Chief Aviation Electricians Mate AEC(NAC/AW). An avid Amateur Radio operator, he was first licensed in 2002 and is the President of the NXP Amateur Radio Club, W7MRF. Jim holds a Bachelor of Science Electrical Engineering degree from Drexel University.