Does RF Energy Mean the End of the Microwave Oven?

To paraphrase an old saying, there’s more than one way to cook a fish. Well now, alongside traditional methods such as baking, steaming, grilling, frying or even barbecuing, fish and other highly sensitive foods can be treated with culinary respect using smartly controlled microwave energy in a solid-state cooker. 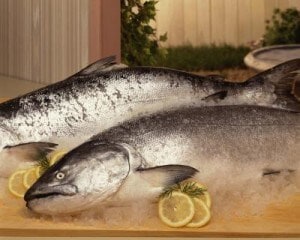 Of course, any chef would be appalled at the thought of cooking a delicate fish like a trout or a salmon in a microwave. I mean, the poor thing, it deserves better surely? The magnetron – the hub of the microwave oven – takes a brute force approach, with absolute power level the only available parameter to deliver energy to heat up food, liquids, gremlins or whatever else you might put in a microwave oven.

The solid-state cooker, on the other hand, provides a significantly more controllable approach. As well as control over the power level, energy delivery can be optimized by tuning the frequency depending on conditions inside the oven. In fact, in a video that looks at some the possibilities enabled by RF energy, you can see a fish cooked to perfection while still embedded within a block of ice. And it was extremely tasty… so I’m told anyway…

And it’s more than just fish that benefits

The microwave generating hardware is fundamentally the same as the one for the traditional use of RF, with signal conditioning plus an RF power amplifier. However instead of sending RF energy into an antenna to transmit data, as with a cellphone or GPS, it is channeled via wave guides into the oven to heat the chosen object. “Object” here denotes about anything that absorbs microwave radiation – hence, the solid-state RF cooker is far from being the only application enabled by RF energy.

Other potential uses include industrial applications such as ovens and furnaces e.g. for drying materials such as ceramics or wood. In medical applications it’s opening up new possibilities such as the safe rapid defrosting of human organs and blood or hyperthermia therapy for cancer treatment. All these require a very high degree of temperature control, achieved via coordinated RF energy irradiation from one or several channels.

Another key area for RF energy is the excitation of plasmas. Innovative RF plasma lamps can deliver unbelievably bright light at 140 lumens per watt, or RF energy can fire a gas discharge to drive powerful industrial laser cutting tools. Then there is the RF spark-plug for automotive ignition systems, which can provide significant savings in fuel consumption and CO2 emissions.

All these applications are being enabled by the development of high-power LDMOS RF transistor technology. NXP has made significant breakthroughs in this area and at IMS 2013 (IEEE International Microwave Symposium) the company introduced an industry first. A complete RF power transistor portfolio designed specifically for the 2.45 GHz ISM (Industrial, Scientific, Medical) frequency band. The portfolio enables RF energy to be used as a clean, highly efficient and very controllable energy source. Developed in conjunction with customers serving markets such as home appliances, medical and automotive, the new BLF2425M and BLF25M series of RF power transistors achieve improved efficiencies in excess of 52%. They offer a full range of power levels between 5 and 350 Watts. The devices are based on NXP’s 28 V LDMOS process technology and all feature high ruggedness and reliability.

Are you ready to tap into the power of RF?

The power and controllability of RF energy is enabling new products and technologies. Offering outstanding performance, it brings about new ways to enhance our lives in diverse areas from industrial to medical, and from automotive to lighting. It will even be found in the kitchen, where it is sure to add spice to the culinary arts. So while the reign of the microwave oven as a ubiquitous tool in the kitchen is not over just yet, it now has some very serious competition.