The recent focus on coronavirus may have obscured another safety related issue that doesn’t obey borders: traffic accidents. As part of the group that helped Volkswagen Deliver Safety to European Roads with World’s Largest Rollout of Communicating Car Technology, we are passionate about the life saving potential of V2X. This week saw reasons for excitement as the automotive world witnessed V2X developments in Europe. The Euro NCAP (new car assessment program), which performs tests and issues safety assessments on new vehicles, rewarded Volkswagen’s car-to-x communication system the coveted NCAP Advanced award. Next to that, the German General Automobile Club (Europe’s largest and most influential), ADAC, tested thoroughly and issued exciting assessments of the Golf 8 in various road safety scenarios. With this enthusiastic backing by two credible, safety-focused associations, V2X may now see an acceleration in acceptance and further rollout. 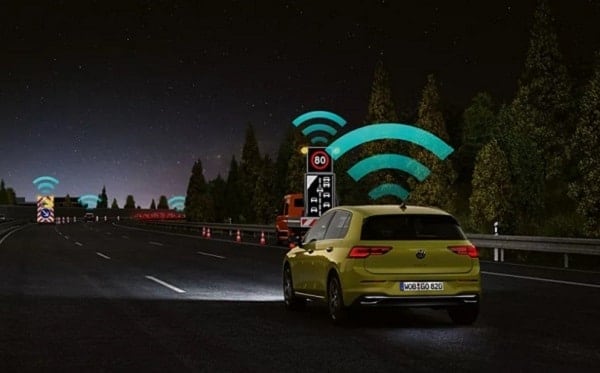 Euro NCAP noted in a press release their excitement around this safety feature and its potential to help road users. “Local Hazard Warning” system, which is standard on the Golf 8, allows cars to communicate with each other and with road infrastructure and emergency vehicles to give the driver advanced warning of local safety hazards. The system uses C2X/V2X technology, a WiFi®-based technology, to transmit a signal to others if they have broken down or have stopped suddenly and present a safety risk.

This recognition by Euro NCAP is a big deal. It’s been nearly six years since they gave out the advanced award. The press release goes on to say that other manufacturers are also considering WiFi-based V2X technology and it may be possible for drivers to receive advance warning of motorcycles and tractors in the future.

The Conclusion of ADAC Article on Testing

In other news, ADAC released the results of its recent testing of various safety-related scenarios using Wi-Fi-based V2X in the Golf 8. You can access the article and videos in German here. Among the tests were a vehicle standing at the edge of the road, a car passing a roadside construction site, emergency braking, emergency vehicles in cross traffic and a parked accident vehicle behind a curve. (link to full text)

V2X is a technology that has been developed and tested for over 15 years and can be considered “a new milestone for traffic safety”. The Austrian ASFiNAG road operator has already equipped its construction site trailers with V2X, which provide early warning of closed lanes and construction sites on motorways. In the future, it would also be conceivable that ADAC helper cars would be able to point out breakdown vehicles even better, that pedestrians and cyclists would be better protected with a V2X module, and traffic lights would give the driver information about the green wave in real time.

The potential of Wi-Fi based V2X technology is immense. It is being proven and on the roads in Europe with one of the world’s largest carmakers. The recognition last week from both Euro NCAP and ADAC is a major milestone towards broad acceptance and rollout in Europe. The big question now is what will America do? There may be big changes coming for the future of V2X in the United States. Stay tuned for commentary on that in next week’s blog.

Andrew Turley is Senior Director of Innovation and V2X Program Manager at NXP Semiconductors. Andrew is a 30-year veteran of the semiconductor industry, focusing on research, engineering design and development for the automotive industry.