It’s here! The i.MX RT1170 crossover MCU, now the eighth family introduced in the i.MX RT series since 2017, follows a solid line of predecessors with great market success. As the industry’s first GHz MCU, this ground-breaking family combines exceptional computing power and multimedia capabilities with ease of use and real-time functionality. The dual core i.MX RT1170 runs on the Arm® Cortex®-M7 core at 1 GHz and Cortex-M4 at 400 MHz, while providing advanced security. With support over a wide temperature range, the i.MX RT1170 MCU is qualified for consumer, industrial and automotive markets.

The i.MX RT1170 makes several key advancements to the i.MX RT series, including:

The i.MX RT1170 MCU expands the popular i.MX RT series to address the growing performance needs of edge computing for industrial, IoT and automotive applications—serving as the next-generation microcontroller platform for these applications.

Its heterogeneous dual-core ARM architecture offers lots of advantages: the GHz Cortex-M7 computational power enables rapid decision-making at the edge. Developers will no longer be confined by traditional constraints and are free to innovate like never before, running multiple machine learning use-cases like image classification, voice recognition—you name it. Machine learning algorithms can have shorter inference times and higher accuracy for a broad range of applications. While the Cortex-M7 handles complex cognitive functions, the Cortex-M4 core can be dedicated for time-critical control tasks, such as sensor fusion and motor control.

The i.MX RT1170 MCU device is built using the 28nm FD-SOI technology. This advanced technology is central to the level of integration, performance and energy efficiency which can be achieved on the chip. With the attributes of 28nm FD-SOI, both the active and static power are optimized.

Along with the advanced technology node, the i.MX RT1170 MCU provides a very flexible power architecture with up to 16 programmable setpoints that can be used to automatically configure clock sources, peripheral clocks, voltages, system power domains and other peripherals based on the current processing, functionality and power requirements. As a result of its dual-core architecture, each core can request a different setpoint and a hardware arbitration process will determine the actual setpoint to use.

The dual-core architecture itself is also a key part of the power efficiency. The SOC has multiple power domains. The separate core domains enable developers to run applications in parallel on both cores or reduce power consumption by turning off individual cores as necessary. Peripherals are also distributed across power domains that can be shut off whenever the modules contained within are not needed, allowing for flexible power management that can be tailored to any application requirements. 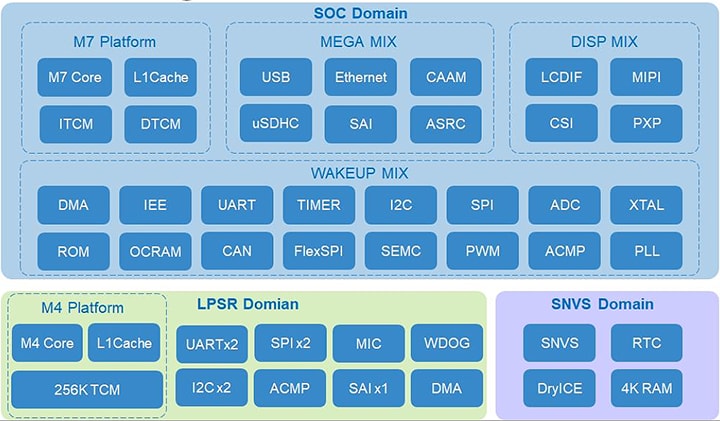 The i.MX RT1170 integrates a 2D vector graphics core with support for Open VG 1.1 API. The graphics processor also has a VGLite API available supporting a subset of OpenVG functions with a smaller memory footprint. The pixel pipeline (PXP) from the i.MX RT10xx devices is still available as well. The GPU and PXP can be combined to enable the development of attractive user interfaces at low power by off-loading graphics rendering and manipulation to the GPU and PXP. See AN13075 for more information on using the GPU and PXP modules. On the physical interface side, i.MX RT1170 adds support for 2-lane MIPI CSI and 2-lane MIPI DSI. See AN12940 for more information on using the MIPI-DSI interface.

One of the other new features making its way into the i.MX RT series on the i.MX RT1170 MCU is Gigabit ethernet support. i.MX RT1170 devices support up to three ethernet controllers:

The i.MX RT1170 MCU family also continues the evolution of security features for the crossover devices:

Since its inception, the i.MX RT series of crossover MCUs has held the promise to blend the high-level performance typical of applications processors with the power-efficiency and design simplicity of a microcontroller. The i.MX RT1170 MCU is the next step in breaking that barrier through several key advancements in performance, power-efficiency, integration and security. Curious in taking that next step yourself? Request your i.MX RT1170 EVK and start designing with us.

Melissa Hunter has worked in the semiconductor industry for 22 years supporting 32-bit MCUs across various product lines, including ColdFire, Kinetis, i.MX RT and LPC portfolios. Melissa has authored technical papers and taught classes discussing a number of MCU topics on security, flash programming, performance optimization, USB, LCD, in addition to many other topics. She spends her free time playing with her pack of rescue dogs.

An Order of Magnitude: Launching the Gigahertz MCU Era

Happy GaNuary!! NXP Accelerates the Arrival of 5G with State-of-the-Art GaN Facility in the U.S.