I love browsing old 19th and 20th century engineering textbooks. It’s great fun seeing the ingenuity that our technical predecessors used to take measurements that today we consider routine or mundane. The vertical force magnetometer here is one example. This figure and theory of operation was published by the Royal Society of Edinburgh in 1848 and is available to anyone today, courtesy of Google Books. 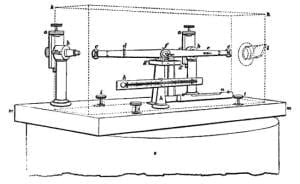 163 years later, we have technologies for taking magnetic measurements based on any number of physical phenomena and targeted at almost any range of measurement needed. With names like AMR, GMR, TMR, Squid, fluxgate, magneto-inductive, SERF and Caesium vapor, it’s easy to get confused. If you are working in the consumer area, you can probably rule out most of these.

It’s only recently that price points have reached the level where we can expect to start seeing magnetometers in low-cost consumer devices.

The ones that get my attention are those based on magnetoresistive technology (AMR, GMR & TMR) and magneto-inductive. 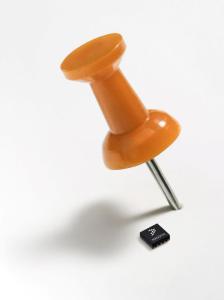 Magneto-inductive sensors, like those offered by PNI Sensor Corp., have an advantage in that they have no need to reset magnetic domains of the material. I own a PNI game controller and use it often. One downside is space, Z-axis devices of this type may not fit in tight environments like cell phones. Magneto-resistive technologies such as those offered by us and other vendors share a common technology base with your average CMOS integrated circuit. X, Y and Z sensors are easily integrated into a single, physically small, package.

Since sensors for all three axes can be combined into a single die using standard IC manufacturing processes, cross-axis errors are minimized. The MAG3110 goes one step further and includes a second die which provides signal conditioning, analog-to-digital conversion and digital host interface.

Our magnetometer utilizes an effect called tunneling magneto-resistance (TMR) which is based upon the magnetic tunnel junction (MTJ) illustrated below. The device includes two electric contacts, two magnetic layers and one barrier layer. In the figure, the tunneling cur­rent I is controlled by the relative orientation of the magnetic fields in the free and pinned magnetic layers. The current “I” is maximized when the fields in both layers are aligned with one another. It is minimized when the two fields have opposite polarity. Essentially, the MTJ acts as a resistor which is dependent upon the magnetic field. 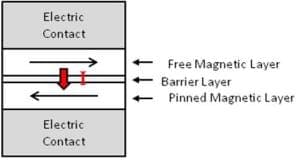 Physically, each MTJ device can be optimized to sense magnetic fields in a specific direc­tion. The magnetic sensor is formed by arranging arrays of these devices into three separate Wheat­stone bridges (each sensitive in a different direction) whose output voltage can be converted to digital format by the ADC.

We’ve come a long way from that vertical force magnetometer shown in the Royal Society transactions. The MAG3110 shown next to the thumb tack above is 2mm x 2mm x 0.85 mm, provides measurements for all three dimensions and consumes as little as 24 micro-amps at 1.25 Hertz sample rate. If your microcontroller has an I2C port, you have all the circuitry you need to take magnetic measurements.

I’ve obviously glossed over a lot of details. So if you’re interested in learning more, take a look at some of the references I’ve listed below. They do a far better and more exhaustive job at explaining your magnetic measurement options than I can possibly provide in this space. And be sure to visit the MAG3110 page.