Smart Loyalty: MIFARE Drives the Next Trend in Retail

The modern loyalty program, which rewards customers for their business, can be traced back to the early 1980s, when airlines began offering exclusive benefits for “frequent flyers.” The trend has been growing ever since, with the result that just about every kind of retailer now offers some kind of “points” or reward program as thanks for regular patronage.

It’s easy to see why loyalty programs have become so popular: they work. In a 2014 study, the U.S-based research firm, Technology Advice , found that 82.4% of consumers are more likely to shop at stores that offer loyalty programs. That’s because these programs help consumers save money and get rewards. Whether it’s a paper punch-card from the local coffeehouse, a plastic card with a bar-code used by a national grocery store or a smart card issued by an international hotel chain, loyalty programs let you receive special discounts, earn extra merchandise or gain access to special, members-only services.

Loyalty programs based on mobile apps, which let you access the program through your smartphone, have only been around for a few years, but have caught on quickly. According to a recent report issued by Bond Brand Loyalty (formerly Martiz Loyalty Marketing), 73% of smartphone users are interested in using their mobile device to interact with a loyalty program.

The Technology Advice study, mentioned above, confirms this, saying that more consumers want loyalty programs tied to smartphone apps. But the study found the app on its own may not be enough – the majority of shoppers polled prefer a hybrid system, involving a physical reward card tied to a digital network and a smartphone app. They prefer the hybrid approach because it gives them the best of both worlds – a smartphone app for access to instant coupons or location-based discounts, along with a physical card that’s easy to hand to a cashier.

Hybrid programs work best when the physical card is a contactless smart card, because the contactless technology enables a number of added features. The smart card can be used to store loyalty points, and can work in a multi-application environment, supporting added functions like micropayment or compatibility with cross-branded programs. One card can work for just about everything, from parking garages to vending machines and retail shops, to restaurants, VIP lounges and resort spas. 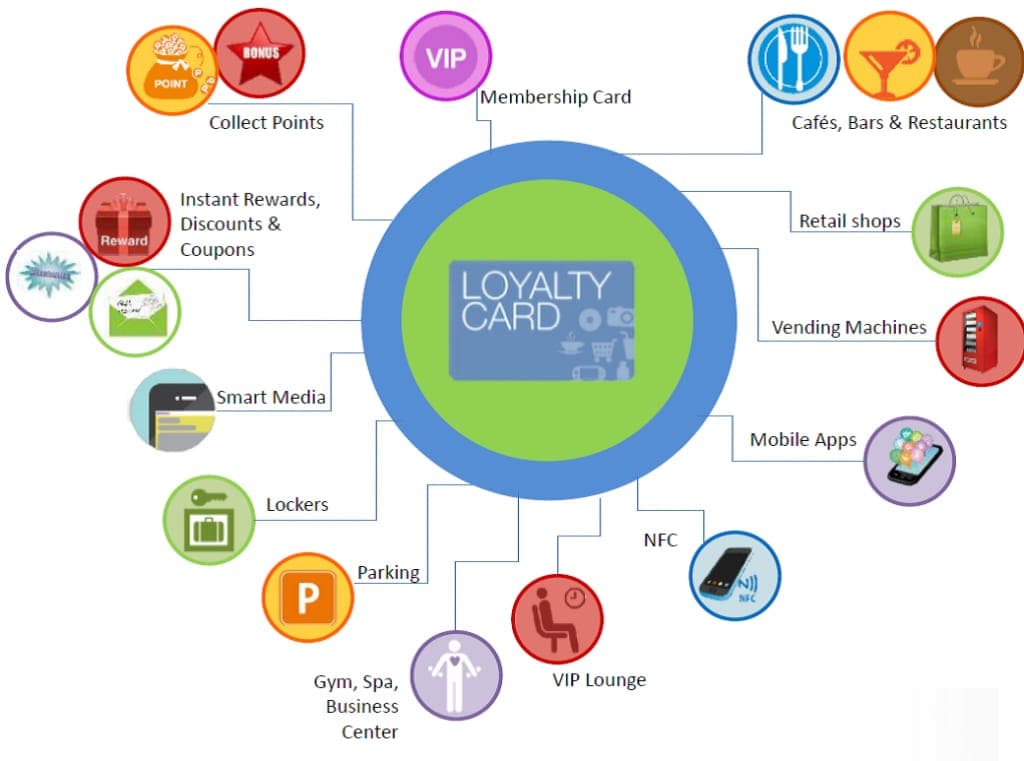 Compared to a paper punch-card or a card with a bar code or magnetic stripe, a contactless smart card is safer, because on-card data can be encrypted, more convenient, because the card is fast and easy to use, and more powerful, because the card can store extra information and be programmed for additional functions.

MIFARE, which is the leading brand for contactless IC products, is already used in 736 cities worldwide. And, having shipped in more than 10 billion ICs, it’s supported by more than 1000 business partners and an infrastructure that includes more than 150 million reader machines.

While MIFARE is perhaps best known for its use in transport (more than 80% of all contactless ticketing credentials deployed use it), MIFARE is gaining momentum in payment applications, too. Banks are moving quickly to drive adoption of contactless payments, and the massive rollout of contactless point-of-sale (POS) systems in retail offers great opportunities for companies wanting to deploy smart loyalty programs based on contactless technology.

A key feature of MIFARE is that it is fully compatible with Near Field Communication (NFC), the tap-and-go proximity technology now being deployed in a wide range of mobile devices, including smartphones and wearables. NFC-enabled phone shipments surged 300% in 2012, and are forecast by Berg Insight to grow to 1.7 billion units in 2016. MIFARE is deployed in over 70 smart NFC devices, and that number is getting bigger every day. NFC and MIFARE are closely related, from a technology standpoint, so it makes sense for the two to be linked together. NFC devices work in the MIFARE infrastructure, which means any NFC-enabled device has the potential to work wherever MIFARE smartcards are used.

Choosing  a MIFARE  chip  for a smart loyalty program enables design freedom and greater customization, since the contactless technology can be implemented in more than just cards. MIFARE chips can be designed into a thin, pliable sticker that can be affixed to the back of a phone (or a traditional wallet or card case), and used at pay stations. In similar fashion, MIFARE chips can also be designed into a key fob or wearables, for on-the-go convenience without the need to carry a purse or wallet. Loyalty programs can support different formats – cards, stickers, wearables – depending on the application and customer preference. The MIFARE ecosystem, which offers hardware building blocks, software tools and design expertise, gives smart card developers the flexibility to deploy the format and features best suited to their purpose.

MIFARE has an added advantage for developers working in the Android space, since the new MIFARE Software Developer Kit (SDK) makes it fast and easy to create Android-based apps for MIFARE, NFC tags and even ICODE RFID tags. The SDK forms part of the extensive ecosystem that supports MIFARE implementations, from mobile apps, reader ICs and POS terminals, to expertise on security and NFC deployment.

For any retailer deploying smart loyalty programs based on MIFARE, the return on investment can be quite quick, since the program can increase business and create additional revenue streams. Support for micropayments, the ability to do more with a single card and the option to update applications once cards are deployed, enhances the consumer experience and gives shoppers more reasons to use the program in the first place.

Crowd Control: Use RAIN RFID Sessions to Improve the Accuracy of Inventory Counts

From Source to Store—How Secure Is Your Supply Chain?