The Accidental Thermal Engineer: Do Thermal Resistances Add Up?: Part 2

In my March post, I introduced the concept of “thermal resistance” (Rthj-a) as a measure of how easily a system is able to lose its heat energy to its ambient environment. We saw that, for a MOSFET device mounted on a single-sided PCB, Rthj-a depends heavily on the amount of PCB copper to which the device is soldered. See Figure 1. 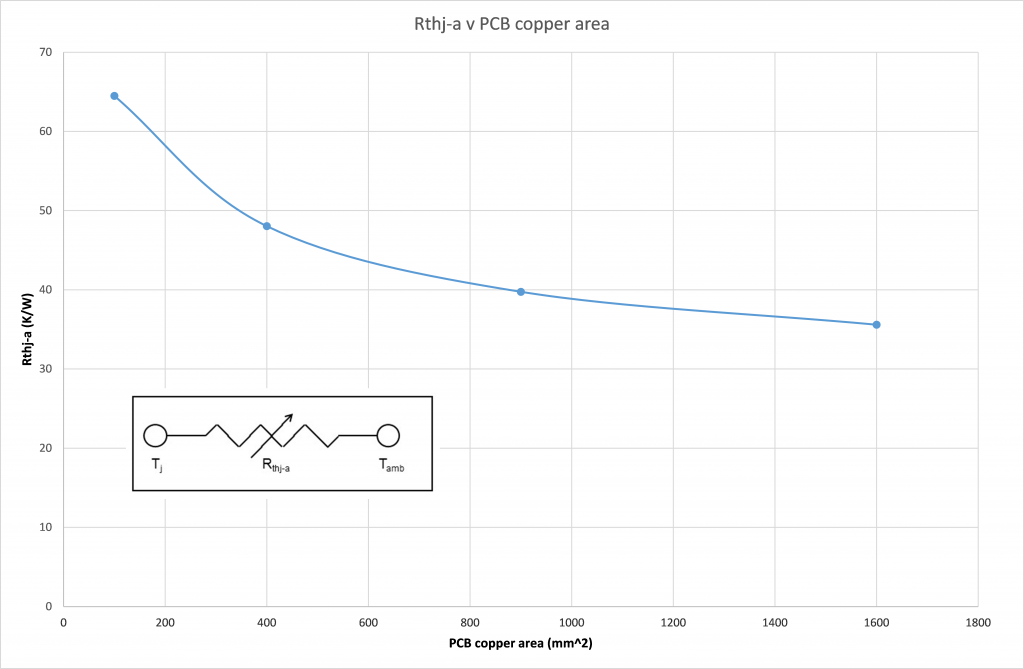 I then went on to pose the question: “Is there another way in which we could assist the device thermal energy in its passage towards ambient? Would it help, for instance, if we put a heatsink on top of our device?”, as illustrated in Figure 2. 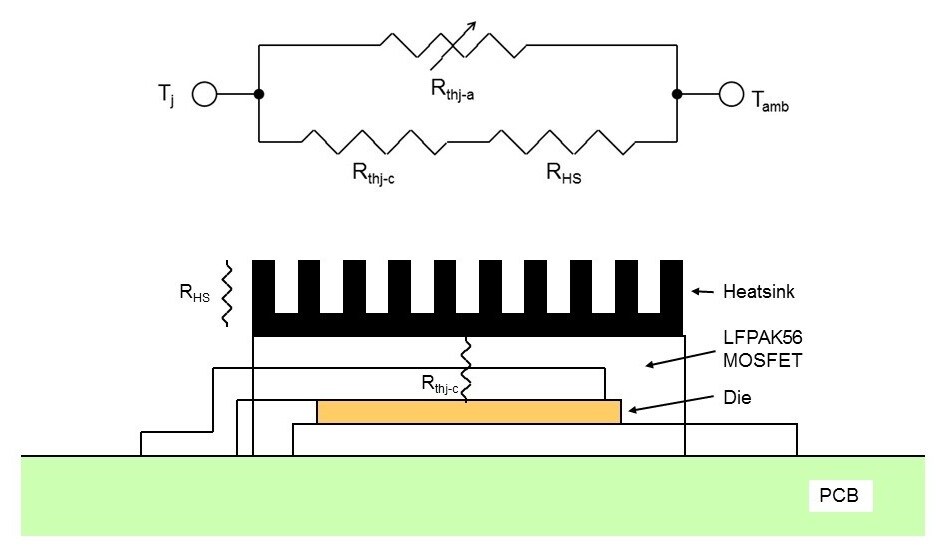 Figure 2 Adding a heatsink to the top of the LFPAK56 device, and its associated thermal network

So can we predict the thermal performance of the new system (i.e. with heatsink attached) simply by calculating the new equivalent Rthj-a – which we’ll call Rthj-a(new) – from the series/parallel combination of Rthj-a, Rthj-c and RHS? If we carry out these calculations, we end up with the second curve (“Predicted performance”) shown in Figure 3, grey line. Note that Rthj-a(new) is found using the equation:

Rthj-a is read from the graph of Figure 1 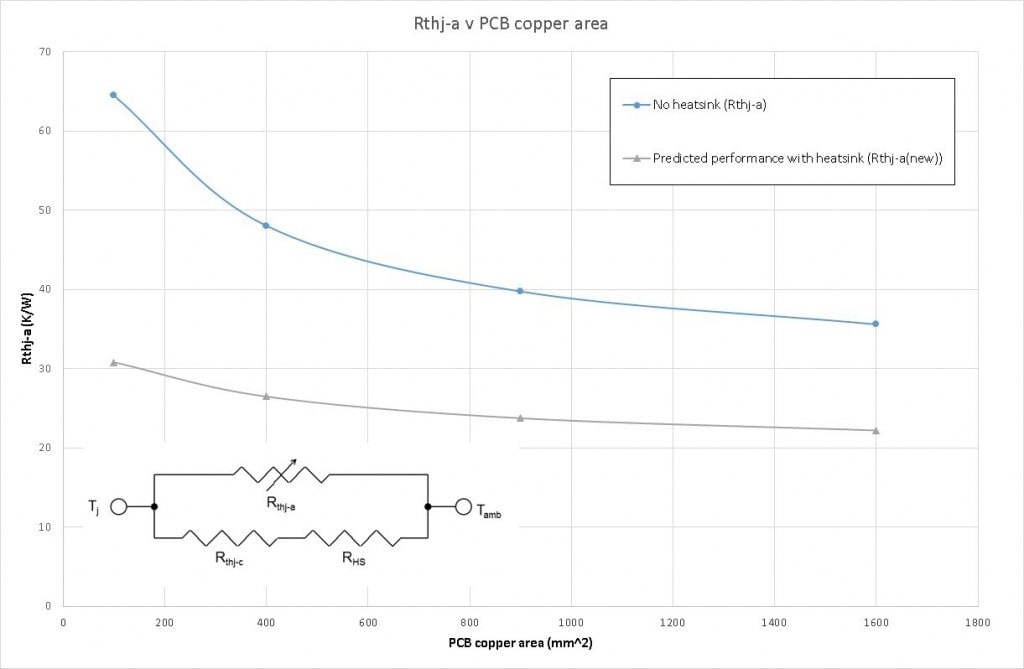 Wow! It looks like adding that heatsink is really going to improve the thermal performance of our system, doesn’t it? Let’s run the simulations now, just to confirm this impressive improvement in performance (Figure 4, orange line)… 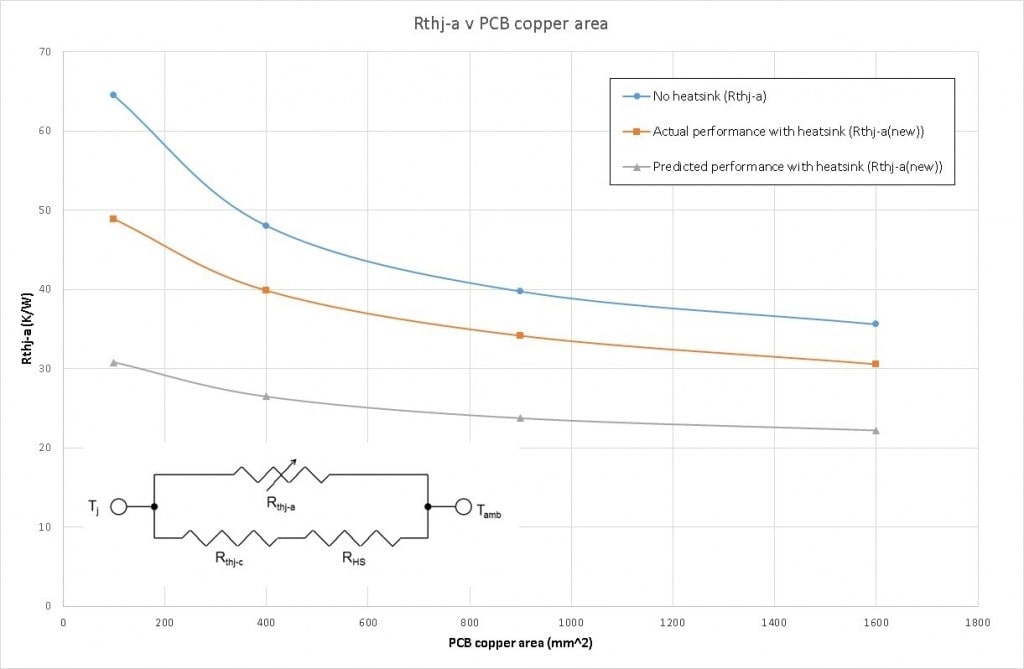 So why the big difference between what we expected and what we achieved? There are several reasons why, but probably the most important is that the ambient temperature “experienced” by the heatsink is not the same as the ambient temperature for the system as a whole. If you cast your mind back to Figure 2 of my January 2016 post, you will see an illustration of the blanket of hot air which appears above a PCB-mounted device when it is dissipating heat energy. When we place a heatsink on top of the device, the blanket of hot air also envelopes the heatsink and degrades its ability to further remove heat from the device. To put it another way: the heatsink is itself being heated up by hot air rising from the PCB surface. I’ve illustrated this phenomenon in Figure 5. 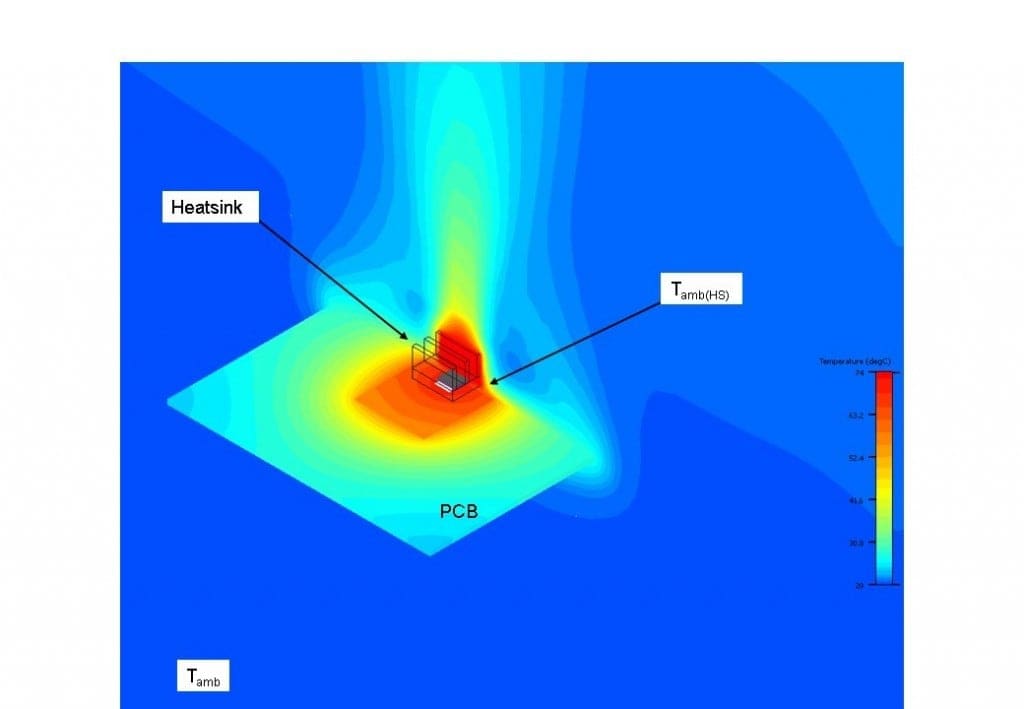 Figure 5 Thermal simulation plot of an LFPAK56 device with heatsink on a PCB.

In effect, the heatsink now has its own local ambient temperature (Tamb(HS) in Figure 5) which is higher than the system ambient temperature Tamb. So going back to the thermal network of Figure 2 (top), we can see that the network is not quite as simple as we first thought, and needs to be redrawn as shown in Figure 6 (bottom). 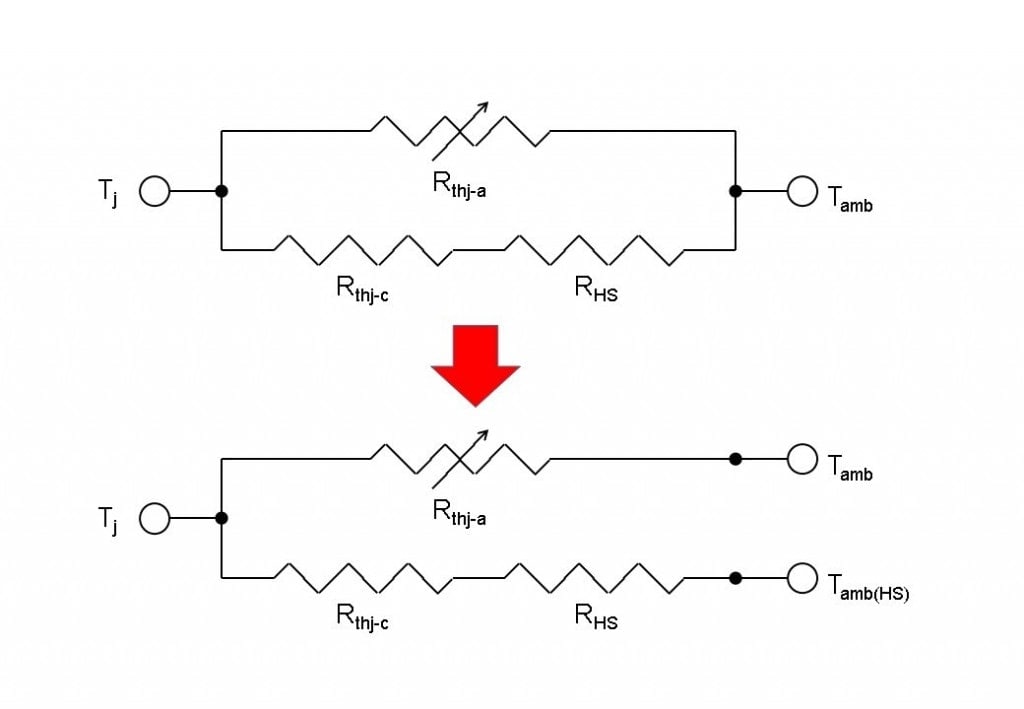 Sadly, predicting Tamb(HS) really is beyond the scope of simple calculation as it depends on the transfer of heat energy to the surrounding air in three dimensions. So, whilst attaching a heatsink to the top of a dissipating device will usually yield some benefit, the degree of benefit may be difficult to predict and will be less than simple theory suggests. If we apply some forced-air cooling to the scenario then manual predictions will become even more difficult – this is a topic I may return to in future blog posts.

I’m out of space now, but thanks for reading and I hope to see you again next time for more thermal ramblings!

[1] I should also add that we have observed this phenomenon in real-life testing, so the results shown in Figure 4 cannot simply be explained away as some quirk of the simulation software.

With over 20 years experience as an applications engineer specialised in power MOSFETs, Chris has dealt with a multitude of power semiconductor design-in challenges. One of the recurring themes in these challenges has been �thermal', and therefore he has spent much of his working life immersed in questions of a thermal nature. He has authored numerous conference papers, magazine articles and application notes on a variety of power semiconductor topics. In his free time he likes nothing better than plodding through muddy fields in the North of England.