In my August post ‘A look at die-level heat transfer’, I introduced the idea of a MOSFET ‘detailed model’ which could be used for predicting temperature rise and heat flow in the die at very short times scales. This was followed by my September post

‘Top Clip’ where I took the idea of a detailed die model further, showing how a top clip could be added to a standard D2PAK device in order to improve the thermal performance of the device over a specific time range. This D2PAK case was a purely hypothetical example. So in this post I would like to look at some real devices that use a package which does have a top clip, NXP’s LFPAK56 and see how the thermal performance would be affected if the top clip was not present.

Before I come to that, I’d first like to introduce the concept of ‘transient thermal impedance’. Transient thermal impedance graphs, also known as ‘Zth curves’ (zed-theta curves), are a convenient way of describing time-dependent thermal behaviour without referring to specific power levels or temperature rises. If you’re not already familiar with Zth curves then I urge you to take a look at our Application note – Using Power MOSFET Zth Curves, and in particular the worked example in Section 2.1. I’ll wait a minute for you to do that… OK, so now we’re all comfortable with the idea of Zth curves, let’s return to the LFPAK56.

If you look at our focused package page on NXP.com, LFPAK56 – The toughest power-SO8, in the section ‘Innovative clip-bonding’ you’ll see an exploded view of the package, which is also shown below. In this case the top clip is labeled ‘Solid Source Clip’. 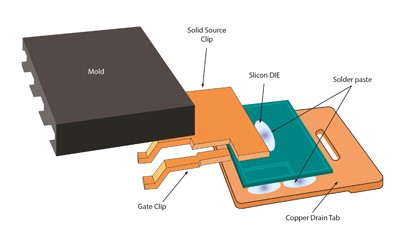 Figure 1: An exploded view of an LFPAK56 package.

Using the detailed model approach for the die we can produce Zth curves for an example LFPAK56 device, both with and without the top clip. The device was modelled on a single-sided FR4 PCB with 1” square of top copper in the JEDEC JESD51-2A test enclosure. The results are shown in Figure 2, and given that reading numbers from log-log graphs can sometimes be tricky, I’ve labeled the data points to make things clearer.

Figure 2: Example Zth curve for an LFPAK56 with and without top clip.

To further illustrate the point I ran two further simulations – again for the LFPAK56 with and without top clip. This time for the device conducting a rectangular 100 A, 10 ms current pulse. The results are shown in Figure 3. 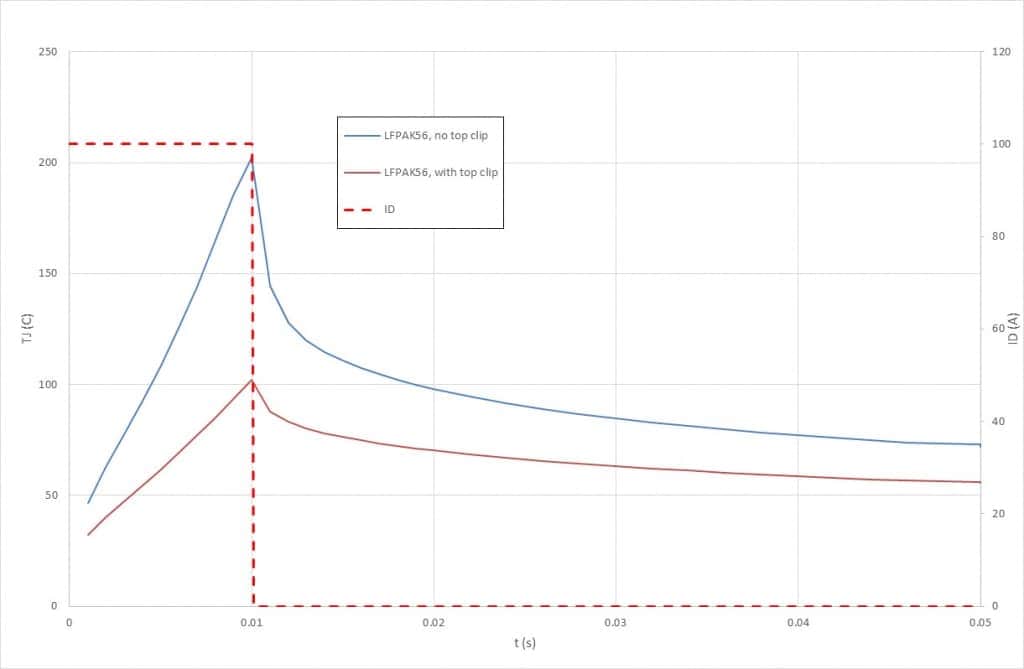 Clearly the top clip is making a big difference. At shorter time scales the Zth figure is more than halved at 1 ms (Figure 2) and peak temperature significantly reduced for a 10 ms current pulse (Figure 3).

However looking again at the Zth curves for longer time intervals, the top clip appears to have less and less effect. In fact once we’re into the seconds range it has almost no effect at all. This is one of those ‘non-intuitive’ results I mentioned in my first post: “if I stick a heatsink (i.e. the top clip) on top of something hot then shouldn’t it always make it cooler?” As is so often the case, the answer to this question is clearly ‘it depends’ – more on this in the near future.

In my next post I will begin an exploration into the interesting and sometimes controversial topic of ‘top-side cooling’.