Car radar, car-to-car and car-to-Infrastructure communication systems serve a wide range of purposes. Among them, increased safety & comfort, smoother traffic flows with less congestion and reduced fuel consumption. Today, we use our most advanced technologies to build systems that alert drivers to any potential danger. This enables large numbers of cars to move as one, avoiding obstacles and maintaining a safe distance from each other. The various wireless communication technologies we use are all based on RF:  electromagnetic radiation at Radio Frequencies.

Scientists and inventors have traditionally used examples from nature for their own man-made derivatives. In aviation, in medicine, in all kinds of machinery and equipment, nature has been a tremendous source of inspiration. When considering the patterns of massive numbers of cars migrating from A to B, we can see similar phenomena in nature.

A murmuration of starlings

Think of those huge flocks of starlings forming a so-called murmuration. Who has never wondered how they seem to move as one, how they fly at high speed in the same pattern without colliding once, all seeming to know where they are heading. They warn each other in a split second in case of an approaching predator, and adjust their direction accordingly, in perfect synchronization. Huge schools of fish, like sardines, show similar behavior. They even cluster to mimic the shape of one big fish in an attempt to scare off predators. 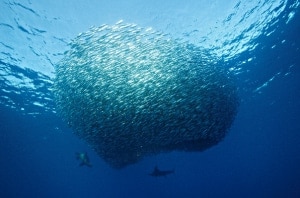 A school of fish mimicking one big fish to deter predators.

Biologists are still studying the technologies and senses birds and fish use to show this incredible synchronized behavior. Sight will play a role, as will sound, but is that all? Is it ultrasound? Or light invisible to the human eye? Or some other type of radiation we even don’t know yet?  And how does the system work: is there one leader who directs all other “nodes in the system”, does each animal pass on signals to its neighbor and how? And why on earth does not a single bird or fish miss the message and move in the wrong direction? The animal systems of collision-avoidance and spatial awareness show a level of reliability rarely seen in human-made wireless communication systems.

NXP is using its leadership in wireless RF communication, in low-power design and in security, to develop superior chips for Car-to-X communications and for other networked systems with many interconnected nodes, such as the Internet of Things. At the same time we are studying alternative wireless communication technologies, based on other physical phenomena like visual light, ultrasound, magneto-inductive signals, body-coupled communications and others. This helps us explore and innovate in flawless, low-power and secure next generation wireless communication systems. We will continue to include nature as an endless source of inspiration for innovation, drawing lessons from the flawless designs of the world around us.

At NXP Semiconductors my specialization is communications for Research & Development. In that role I help the R&D management with developing communication strategies and key messaging. I also execute all kinds of communication activities, to all our target audiences: Press, customers, partners, government representatives and many other external parties. But also our own employees form an important target group. Media used are presentations/demos, internet & intranet, social media, newsletters, gatherings and events, brochures, direct mailings, video, surveys etcetera. My technical background as an engineer and technical manager allows me to easily relate to the content, as well as to the engineering world and its people. Expanding my scope from engineering to communications, about ten years ago, allowed me to develop competencies in creativity, in tailored message development, in copy-writing and event management, as well as in high level networking. Working directly for NXP's Chief Technology Officer and his management team, I operate at the heart of the R&D organization, close to strategy development and decision making. As one of Europe's top chip manufacturers, NXP is an extremely dynamic company. Business challenges can change overnight: never a dull moment!