The PTN3361B is a high-speed level shifter device which converts four lanes of low-swing AC-coupled differential input signals to DVI v1.0 and HDMI v1.3a compliant open-drain current-steering differential output signals, up to 1.65 Gbit/s per lane. Each of these lanes provides a level-shifting differential buffer to translate from low-swing AC-coupled differential signaling on the source side, to TMDS-type DC-coupled differential current-mode signaling terminated into 50 Ω to 3.3 V on the sink side. Additionally, the PTN3361B provides a single-ended active buffer for voltage translation of the HPD signal from 5 V on the sink side to 3.3 V on the source side and provides a channel with active buffering and level shifting of the DDC channel (consisting of a clock and a data line) between 3.3 V source-side and 5 V sink-side. The DDC channel is implemented using active I²C-bus buffer technology providing capacitive isolation, redriving and level shifting as well as disablement (isolation between source and sink) of the clock and data lines.

The low-swing AC-coupled differential input signals to the PTN3361B typically come from a display source with multi-mode I/O, which supports multiple display standards, e.g., DisplayPort, HDMI and DVI. While the input differential signals are configured to carry DVI or HDMI coded data, they do not comply with the electrical requirements of the DVI v1.0 or HDMI v1.3a specification. By using PTN3361B, chip set vendors are able to implement such reconfigurable I/Os on multi-mode display source devices, allowing the support of multiple display standards while keeping the number of chip set I/O pins low. See Figure 1.

The PTN3361B is a fully featured HDMI as well as DVI level shifter. It is functionally comparable to PTN3360B but provides additional features supporting HDMI dongle detection and active DDC buffering. For HDMI dongles, support of HDMI dongle detection via the DDC channel is mandatory, hence HDMI dongle applications should enable this feature for correct operation in accordance with DisplayPort interoperability guidelines.

PTN3361B is powered from a single 3.3 V power supply consuming a small amount of power (90 mW typ.) and is offered in a 48-terminal HVQFN48 package. 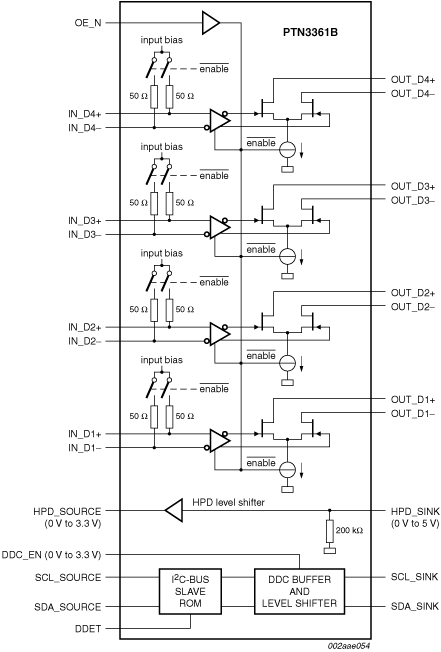