While enterprise and service-provider communications have been stuck in the rip-and-replace model of periodic network upgrades, a funny thing has happened in the quest for ever faster speeds. These networks’ physical layers have converged on OFDM and wide channel bands, regardless of media (wired or wireless), band (baseband, sub-6GHz, or millimeter wave), and standards body (ITU or IEEE). In many cases, these various network technologies will simultaneously offer the same user network access. For example, the user may be served by G.Fast broadband via Wi-Fi, sub-6GHz LTE and mmWave-based 5G cellular.

But not every aspect of networks has converged and none will be forever static. OFDM parameters, such as subcarrier spacing, vary as much as a result of the different paths committees take toward standardization as for technical reasons. Massive MIMO makes sense for 28GHz and higher carrier frequencies owing to their small antennas and poor signal propagation. At Layer 2, networks differ significantly because of differing topologies and usage models. Meanwhile, vendors continually upgrade their designs and the industry periodically updates its standards. Network systems must either rely on unique hardware for each standard as they have in the past or hardware with revolutionary flexibility. 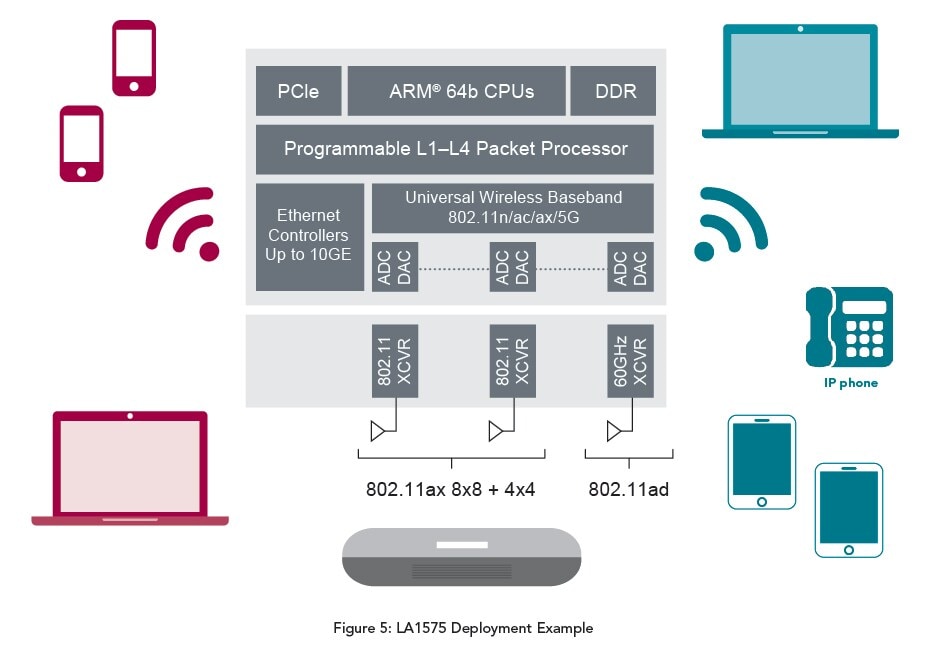 Observing the trend toward technology convergence and the benefits flexibility (if it can be provided without compromise to performance or efficiency), NXP recognized the opportunity to develop a unifying programmable architecture. The company’s new access technology breaks through the limits imposed by hardwired solutions, freeing enterprises and service providers to reap the benefits of software-defined access. The technology stands to transform the business model of communication services, be they deployed by enterprises for internal customers or by telcos for external customers. Key components of the architecture are:

To illustrate the benefits of the new Layerscape LA1575, the first Layerscape processor integrating NXP’s new access technology, let’s review a use case with an enterprise access point deployment. In this scenario, assume that a company is adding a 60GHz radio module to an existing Wi-Fi access point to meet bandwidth demand for new wireless use cases. Assume an 802.11ad module costs $150 and installation costs another $50. The addition on its own is not a huge expense, but a new 60GHz Wi-Fi standard, 802.11ay, is on the cusp of being standardized. With a radio based on Layerscape solutions, the company can address its use cases now and upgrade to 802.11ay at little cost via software in the future.

A bigger benefit to a software-defined radio in the 60GHz band is that real-world performance is likely to arise as a problem. The enterprise could spend hours of troubleshooting (assume 5 hours at $200 per hour for a consultant) and perhaps scrap the 60GHz Wi-Fi deployment owing to poor network performance. However, as 60GHz Wi-Fi vendors gain field experience with the phased antenna arrays and associated signal processing, they will upgrade their algorithms.

A fully programmable physical layer, including antenna processing, will help enable vendors to implement these upgrades on existing customer hardware. Thus, the enterprise’s initial expense of $200 per node is its final expense and not a precursor to expenses several times greater for upgrades and debugging.

Fully programmable physical-layer hardware could completely transform the industry. Communications gear has historically been deployed in a rip-and-replace cycle. To deploy new services or technologies, businesses and service providers replaced old equipment with new equipment. From a technology perspective, this yielded a stair-step experience: a step up in CapEx for installing new gear followed by a plateau of no CapEx during which users experienced the upgraded network.

Equipment based on the access technology in NXP’s new LA1575 can help smooth this experience: users get new network services or better performance more often, equipment hardware lifecycles are longer and network upgrades are more frequent and less expensive because they are based on software. Mirroring this shift from hardware to software is a shift in cash flow from large capital investment lumps depreciated over several years to smaller annual operational expenses for new software, acquired as needed to increment the network’s capabilities. In summary, the network has become more consumable.