Over the past year, a series of IoT-themed senior design projects by students at Texas State University were created based on Kinetis microcontrollers and Thread wireless networking technology. One of the projects was a remote weather station that measures temperature, barometric pressure, wind speed, wind direction and rainfall and transmits the data over a Thread network. This is a great IoT application example that uses multiple sensors – each with very different functional, timing and signal characteristics – and can be easily implemented using a single Kinetis microcontroller that has wireless connectivity. Key components of the weather station
The weather station is designed around a TWR-KW24D512 Kinetis Tower System module, which provides the necessary microcontroller functionality for the sensors and wireless connectivity for the Thread networking protocol. The anemometer (wind speed), weather vane (wind direction) and rain gauge sensor functions are implemented using a SparkFun SEN 08942 Weather Meter kit. A TWRPI-MPL115A2 barometer attached to the TWR-KW24 board is used to measure atmospheric pressure. A Texas Instruments TMP36 analog temperature sensor is used to measure ambient temperature. A TWR-PROTO board together with a TWR-ELEV system provides space for additional circuitry and robust connections to the external sensors.

The electronic components (excluding most of the sensors) are contained in a weatherproof enclosure mounted to the base of the weather station mast. The entire station is powered from a USB adapter plugged into a 110V AC outlet in the enclosure. The sensors are all connected via modular RJ11 jacks. 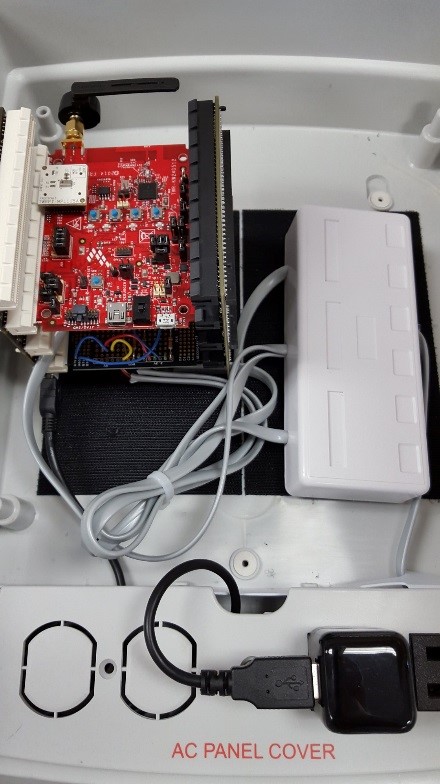 TWR-KW24D512 Tower System and wiring in the weatherproof enclosure

Sensor algorithms
The sensors each have very different functional, timing and signal characteristics, so one of the challenges of this project was developing appropriate interfaces and algorithms for each of the sensors and getting them to all work together. The resulting implementation is based on a main sampling loop triggered by a 10ms periodic interrupt timer, with a callback function that executes the measurement algorithm for each sensor. The operation and measurement algorithm for each sensor is briefly described as follows: 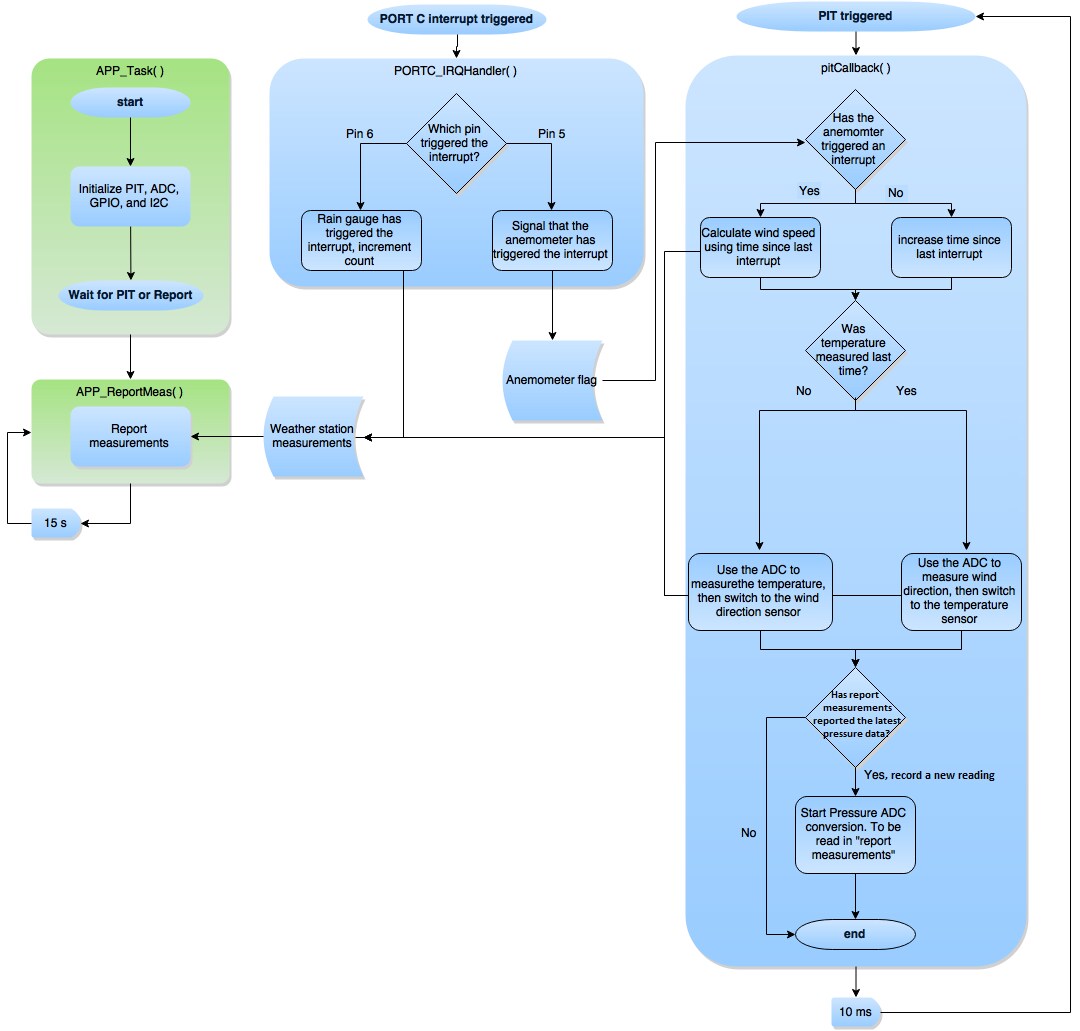 Wind vane
The wind vane sensor is a voltage divider consisting of a resistor array connected with eight magnetic reed switches. A magnet on the wind vane closes either one or two adjacent switches depending on the wind direction. This produces one of 16 different voltage levels corresponding to 16 discrete compass directions. The voltage is measured on one of the ADC channels and a lookup table is used to translate each voltage range to a corresponding wind direction. However, because the voltage levels do not change monotonically with wind direction we implemented a debounce algorithm to ensure that voltage transitions are not interpreted as an incorrect direction. 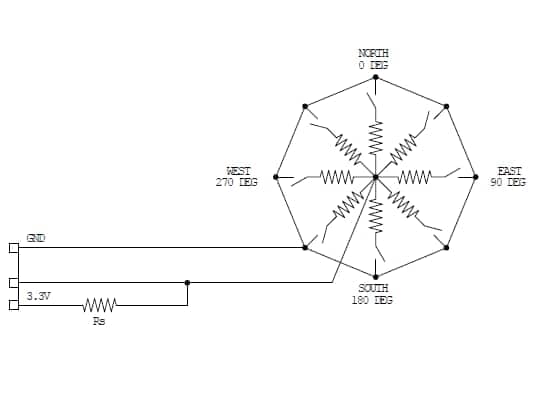 Anemometer
The wind speed measurement uses a cup-type anemometer with a magnetic reed switch that generates a pulse with each half rotation. One pulse per second corresponds to a wind speed of 1.492 miles per hour. In order to provide sufficient accuracy over a wide range of wind speeds, the measurement algorithm measures the interval between pulses. A GPIO input channel is configured to trigger an interrupt on the rising edge of each pulse. The interrupt sets a flag that is checked every 10ms by the main measurement loop, and a software counter records the number of 10ms intervals since the previous pulse. If the flag has been set, the wind speed is calculated from the counter value and the counter is reset; if not the counter is simply incremented. This solution provides an error of <10% for wind speeds up to 15 miles per hour and a maximum measurement of 149.2 miles per hour. A 30 second timeout defaults the measured wind speed to zero for wind speeds less than 0.05 miles per hour.

Rain gauge
The rain gauge measures rainfall using a self-emptying bucket with a magnetic reed switch that generates a pulse each time the bucket tips. Each tip of the bucket indicates 0.011 inches of rainfall. Similar to the anemometer, a GPIO input channel is configured to trigger an interrupt on the rising edge of each pulse. A software counter records the number of accumulated pulses and thus the total rainfall. A debounce function eliminates spurious counts from the reed switch.

During initial testing we noticed some crosstalk between the temperature sensor and wind direction sensors, which are both measured using multiplexed channels on the same ADC. This problem was solved by alternating these measurements between successive 10ms sampling intervals to allow sufficient settling time on the ADC input. In addition, we filtered the measured temperature using a 50 sample moving average to reduce noise.

Barometer
The MPL115A2 absolute digital pressure sensor uses a MEMs pressure sensor and an onboard processor to convert the atmospheric pressure measurement to a 16-bit digital value that is communicated over an I2C interface. The TWRPI-MPL115A2 module is attached to the TWRPI connector on the TWR-KW24D512 board, which is configured to use the I2C interface on the KW24.  The MPL115A2 is sampled every 10ms by the main measurement loop, and the measured value is filtered using a 30 sample moving average. An initial setup routine performs calibration of the barometer.

Thread Communication
Communicating the sensor data over the IEEE 802.15.4 network using Thread was actually one of the easiest parts of this project. The Thread stack implements all the required wireless networking functionality including link configuration and provisioning, network topology management and security features. All that was needed was to assemble the measurements into a JSON (JavaScript Object Notation) string, which is passed to the Thread stack in a single function call.

The weather station is configured as a Thread Router, which means that it can act as a repeater node in the mesh network as well as a source of sensor data. For this demo we used a USB-KW24D512 configured as the Thread Border Router. The USB-KW24D512 communicates with a Utilite IOT Gateway running Proximetry AirSync agent to send the measurement data to the Proximetry cloud service. The weather station is configured to transmit data once every 15 seconds, although this can easily be changed. The data appears in near-real time on the Proximetry portal, which also provides network status and topology information.

The students completed the weather station design, and we have since built additional demo installations that are being used in customer demos around the world. In the end, this turned out to be a highly rewarding project and the students learned a lot – not only about our microcontroller and Thread networking technologies but also about the process of specifying, designing, building, coding, testing and documenting. I can’t wait to see the great new IoT “Thing” they come up with next!

Kevin Kemp manages university research and mentors student teams developing new technologies and applications. He spent most of his career developing and managing advanced lithography technologies at Motorola, Freescale and Sematech. He has a Ph.D. in Electrical Engineering from Clemson University, and Bachelors and Masters degrees from the University of Natal in Durban, South Africa. When Kevin's not mentoring students or making things (he recently designed and built an integrated GPS knotmeter and boat speed instrument based on the Kinetis Freedom platform), you'll find him sailing on Lake Travis near Austin, Texas.