Cast your mind back almost 20 years and you may remember the launch of the Tamagotchi – an electronic ‘pet’ that owners fed, washed, entertained and exercised.  The keychain sized Tamagotchi was a pet simulation game which allowed owners to have a pet without physically owning one.  The pets needed daily attention and poor care of the Tamagotchi creature would result in death (luckily for inattentive owners the game could be restarted – phew!). 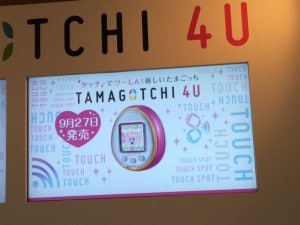 Now, whether you were a Tamagotchi owner yourself or busy coaching a youngster on how not to kill off this special pet, there’s no doubt at all that these ‘characters’ caused quite a sensation the world over.  Originally launched in 1996, and with over 80 million sold by 2013 Bandai, the company behind the Tamagotchi, have just announced a new family of products that are more colorful than before and enhanced with near field communication technology, aka NFC!

At a press event in Japan on July 2, Bandai Japan, made an official announcement regarding the new Tamagotchi, ”TAMAGOTCHI 4U”.  These new Tamagotchi have a color LCD display and come in a variety of colors. What’s really cool about these new products is that they are now equipped with NFC, bringing a whole new level of interactivity to the Tamagotchi.; Using NFC owners can now get Tamagotchi character data from other 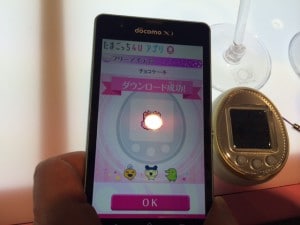 Tamagotchi and even download new character data using their NFC-enabled smartphone. And the interactivity doesn’t stop there. Bandai are teaming up with companies and stores all over Japan so that TAMAGOTCHI 4U owners can purchase the latest gadgets or clothing accessories for their TAMAGOTCHI 4U by using the NFC tags. In fact, the characters in your new TAMAGOTCHI 4U can even eat the same food as you when you visit supporting restaurants!  I’ve got to admit, it sounds like a lot of fun and I’m sure these new Tamagotchi will spur a new wave of fanatical owners…just like the originals did in 1996.

The new TAMAGOTCHI 4U will be available in Japan from the end of September (27th to be exact) and while a launch in Europe, the US and Asia is still under consideration we’re hoping that it will be soon after.

For more information on the NXP NFC tags and products that is also used in the new TAMAGOTCHI 4U products, please visit PN512: Standard NFC frontend