The Importance of Imaging Radar

Why do we talk about radar systems at all? Every year, about 1.3 million people die on the world’s roads, and millions more are severely injured. The adoption of advanced driver-assistance systems (ADAS) with radar technology are crucial to safer driving, avoiding accidents and saving lives. 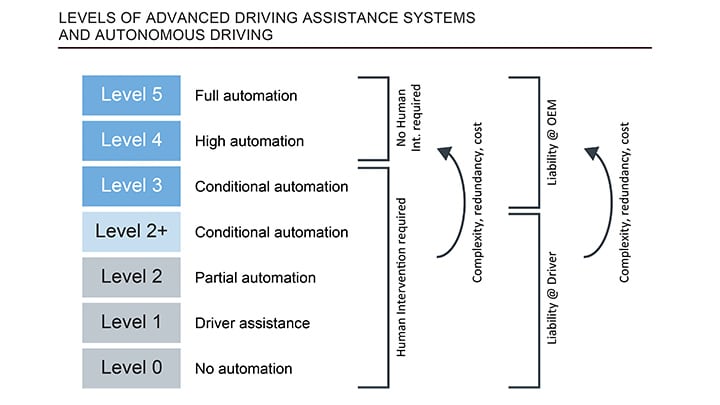 The society of automobile engineers (SAE) defines six levels of driving automation, where L0 is no automation, and, step-by-step, ADAS is evolving to driver assistance, partial automation, conditional automation, and eventually up to fully autonomous L5 vehicles. These directives are driving ADAS adoption and to higher levels of automation.

While the automotive OEMs navigate the many design complexities required to achieve L3 conformance, where the vehicle OEM assumes the accident liability, not the driver, attention has turned to and is driving a transitional level. In regards to sensor technology, there is a significant difference in the leap from L2 to L3. L2+ provides the L3 like capabilities but with the driver available as a backup, reducing the additional need for redundancy. 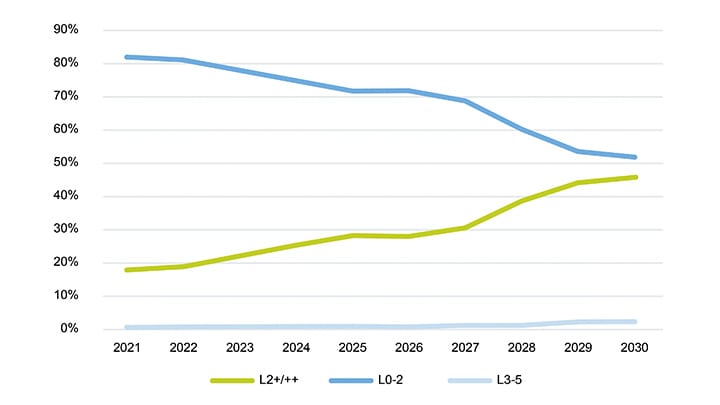 A recent Yole Development report indicates that the uptake for L2+ vehicles is likely to grow steadily as L0 – L2 vehicles begin to subside, achieving almost 50% market share by 2030. L2+ also allows OEMs to gradually roll out advanced safety and comfort features, allowing more time for sensor technologies to mature. The driver continues to provide redundancy in the interim, and the OEMs can optimize the balance between features and costs and gradually introduce L3 ‘light’ vehicles.

Three primary sensor technologies enable ADAS and autonomous driving – radar, camera, and light detection and ranging (LiDAR). Each has its unique strengths and weaknesses, and ultimately, there is no prevailing sensor technology solution.

Radar and camera sensors are largely complementary technologies and are widely deployed in L1 and L2 vehicles, owing to their maturity and affordability. Radars, for example, are excellent at measuring speed, distance, but cannot capture color information. The resolution of angle-of-arrive measured by conventional radars is notably lower than what can be derived from camera and LiDAR sensors. In contrast, cameras are best for pattern and colour detection, but might struggle with environmental effects. It can, for example, be blinded by bright light, not see at night or struggle with fog or snow. On the other hand, radar sensors work very robustly and reliably on bright sunny days and at night and in almost all weather conditions.

LiDAR’s primary differentiating features are its ultra-precise angular resolution, both horizontally and vertically, and its fine resolution at range. These strengths make it well-suited for high-resolution 3D environment mapping, giving it the ability to detect free spaces, boundaries and localization accurately. However, it shares some common weaknesses with camera sensors, having susceptibility to harsh weather or road conditions. Yet the biggest hurdle for mass adoption in mainstream passenger L2+ and L3 vehicles is its cost. Here, the advent of 4D imaging radar with its significantly enhanced fine resolution over conventional radar is proving a compelling alternative to LiDAR.

In the early days, radar technology was mainly used for seeing other cars. Essentially, these were 2D-capable sensors that measured speed and distance. However, today’s state-of-the-art radar technologies are essentially 4D capable sensors. In addition to measuring speed and range, 4D sensors measure horizontal and vertical angles. This capability allows the vehicle to see cars and, more importantly, pedestrians, bicycles and smaller objects.

Figure 3: Imaging radar can differentiate between cars, pedestrians and other objects.

At the bottom end (L2+), the focus is on having a 360-degree cocoon around the vehicle (the industry buzzword for this is 'corner radar'). As the name suggests, there are at least four, but often six or seven fine resolution radar sensor nodes as there might be additional ‘gap filler’ radars to the side. Seeing a child standing between two parked cars in low-light conditions becomes possible for urban autopilot. At the high-end, L4 and above, vehicles can see smaller objects and go into higher resolution, using imaging radar for full environmental mapping around the vehicle and looking in the far distance ahead or behind to avoid a hazard by detecting it and taking proper actions well in advance. Distances reaching 300 meters, or even beyond, are possible in the future. Highway autopilot will be able to detect and react to a motorcycle traveling alongside a truck approaching with high speed from behind.

The Future of Imaging Radar

Key technology ingredients that have enabled this evolution in imaging radar were the migration from 24 to 77GHz, technologies like gallium arsenide (GaAs) or silicon germanium (SiG) to standard plain RF CMOS. Other advancements include going from low to high channel count advanced MIMO configurations and from basic processing to high-performance processing with dedicated accelerators and DSP cores, as well as advanced radar signal processing techniques.

With all of these technologies combined, NXP has developed the S32R45 radar processor that, together with the TEF82xx RF-CMOS radar transceivers, is capable of delivering imaging like point clouds with moderate antenna count. This technology provides a clear, cost-effective pathway for OEMs to deliver 4D imaging radar capabilities for L2+ and higher commercial volumes and cost structure. Alongside are the essential peripherals, such as safe power management and in-vehicle network components. All of this together makes radar node and NXP is positioned to cover the complete system.

For more in-depth information about imaging radar, take the imaging radar session in the Driving Automation and Radar Academy.

Based in Hamburg, Germany, Huanyu is responsible for ADAS Product Marketing and Business Development at NXP Semiconductors. He has many years of experience in semiconductors marketing and business development across a variety of automotive application domains, such as Secure Car Access and Car Infotainment, prior to his current ADAS assignment.

NXP, Volkswagen and Partners Continue to Accelerate the V2X Rollout