Getting Started with the PCF85063AT-ARD Evaluation Board 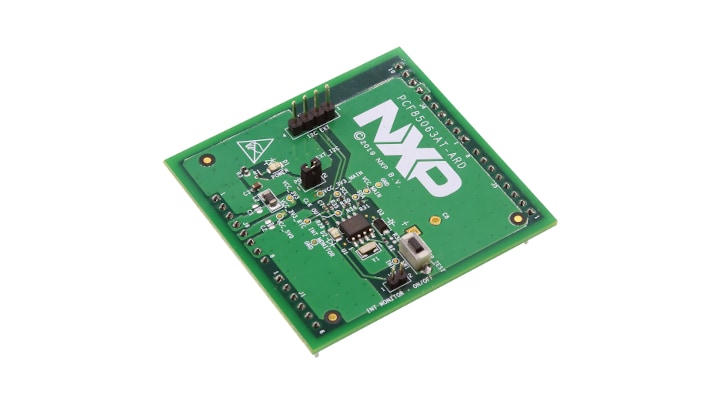 This page will guide you through the process of setting up and using the PCF85063ATARD evaluation board.

Familiarity with the I2C-bus is helpful but not required.

This device is sensitive to ElectroStatic Discharge (ESD). Therefore care should be taken during transport and handling. You must use a ground strap or touch the PC case or other grounded source before unpacking or handling the hardware.

Refer to UM11578, PCF85063AT-ARD evaluation board for additional details on the featured components and board configuration.

Get to Know the Hardware

Note: For 8MMINILPD4-EVK board, it is necessary to use IMX8MMINI-IARD interposer board between the EVK and PCF85063AT-ARD expansion board (see IMX8MMINI-IARD user manual).

The evaluation board is built around the PCF85063AT IC and works as a daughter card. The card can be connected through an Arduino port to various Arduino compatible (including original Arduino Uno R3) boards. The board is intended to test and measure the characteristics of the PCF85063A tiny real-time clock/calendar with alarm function and I2C-bus, supported by NXP Semiconductors.

The RTC communicates with the controller / microprocessor through a bidirectional Fm I2C-bus. Among the device under test (DUT) IC, the board is equipped with an Arduino port and the necessary components for easy testing, shortening the time to make measurements and check operation of the PCF85063AT IC.

Additionally, the expansion board has software support and a graphical user interface (Windows platform) for the following NXP evaluation boards: MIMXRT1050-EVK board, LPC55S69-EVK development board and 8MMINILPD4-EVK board.

Overview of the PCF85063AT-ARD evaluation board

PCF85063AT-ARD evaluation board is designed and built as a expansion board able to work with a mother board equipped with an Arduino port. The board is built to be fully compatible with the following NXP evaluation boards:

The required firmware for the EVK boards is available for download at NXP site. Before starting a pair EVK – PCF85063AT-ARD, the EVK motherboard must be programmed with the corresponding firmware package. Additionally, a GUI application (Windows 10) is available for download from the same NXP site, allowing rapid testing and operation of PCF85063AT-ARD expansion board through one of the EVKs.

The GUI application is common for all three EVKs and for the PCF85x63 RTC development card family, manufactured by NXP (PCF85063AT, PCF85063TP and PCF85263ATL ICs). For details regarding installation of the EVK firmware and GUI host software, see UM11581, Arduino shields GUI and firmware installation manual.

Once the software is installed, the first step is to select the correct EVK from the graphical interface. The board can then be controlled from the GUI interface.

Figure 1 shows the required hardware for operation of the PCF85063AT-ARD expansion board with MIMXRT1050-EVK.

The MIMXRT1050-EVK mother board can be powered through three different connectors: using an external 5.0 V DC power supply, connected to J2 barrel power connector, directly from a USB port through J9 USB Micro-B connector (J9), or from the same USB port through J28 connector. J28 can be used as a debug connector, therefore using J28, through the same USB cable, the EVK can be powered and in the same time linked to PC for data exchange. The older USB ports (from PC) are not able to deliver the necessary current (500 mA), before establishing the communication, use an external power supply (connected to J2). From J1 (see Figure 1), the user can select the power configuration for the mother board. For more details, see i.MX RT1050 Evaluation Kit.

Figure 3 shows the required hardware for operation of the PCF85063AT-ARD and LPC55S69-EVK board.

The LPC55S69-EVK board is equipped with four USB Micro-B connectors: P5, P6, P9 and P10. The board can be powered through any USB port. Using P6 USB connector to connect the board to the PC, the bring-up operation is simplified because P6 is designated for debug, and the USB cable accomplishes two tasks in the same time: powering the board, and data link between the LPC55S69-EVK board and PC. For more details, see LPCXpresso55S69 Development Board.

If 8MMINILPD4-EVK board is used for PCF85063AT-ARD operation, a third board (IMX8MMINI-IARD interposer board) must be used, especially designed and built as EVK – expansion board interconnection. The EVK board 8MMINILPD4-EVK is not equipped with Arduino port, instead has a 2x20 pin expansion connector (J1003, see 8MMINILPD4-EVK user manual). J1003 is a multipurpose port, containing different digital I/O lines, including specialized I2C and SPI buses. Starting from the expansion connector pin chart, an Arduino port interposer board was developed.

In Figure 5 it can be easy to observe, along the EVK and expansion board a third board is included in the setup assembly. This is IMX8MMINI-IARD interposer board. To power up and operate the setup. It is also necessary to have one USB-C cable for power (see picture in Fig. 9), connected to Port 2 of the EVK board. The board is equipped with power switch (SW101) which shall be positioned in ON position to power up the setup. Data communication is assured through a second (USB Micro-B) cable connected to PC and debug port of the EVK (J901).

To attach the expansion board to the EVK, it is necessary to use the IMX8MMINIIARD interposer boards by plugging PCF85063AT-ARD to the Arduino connector of the interposer, and then the interposer to expansion connector (J1003), located on the i.MX8MMINI EVK board (see Figure 5). The user may find more details regarding power-up and operation of the setup assembly, in 8MMINILPD4-EVK user manual (IMX8MMEVKHUG.pdf) and IMX8MMINI-IARD user manual. The files can be downloaded from NXP site.

4.4 Using PCF85063AT-ARD with another Arduino device

The PCF85063AT-ARD expansion board can be operated with different EVK boards, which has an Arduino port. There are two options to connect the board: using other EVK equipped with an Arduino port, and an EVK without Arduino port.

In the first case, a firmware is developed according to PCF85063AT specifications, and then PCF85063AT-ARD expansion board is attached to the EVK to operate the board.

In the second case, using the pin chart of Arduino connectors, make the necessary electrical connections (for power, I2C-bus and control lines), and develop the desired firmware compliant with IC specifications. Use PCF85063A data sheet to read details about internal registers of PCF85063AT and data exchange between internal controller and the EVK. Ensure that the electrical connections are accurate and avoid data conflicts on the signal lines, in order to prevent IC damage.

Connect with other engineers and get expert advice on designing with the PCF85063AT-ARD on one of our community sites.