Today, as part of Google’s next Developer Preview release of Android Things, a new Board Support Package will be added for the Pico board powered by the NXP i.MX 7Dual applications processor. Additionally, this latest release will include support for the Google Assistant SDK enabling developers to embed the Google Assistant voice services within their devices based on the i.MX7Dual.

Android Things, announced by Google in December 2016, is a version of the Android OS, which has been modified for IoT specific needs.in both the connected home and enterprise. Designed to enable product developers to quickly build secure connected devices the addition and easy integration of the Google Assistant with Android Things enables a whole new set of usage models as companies look to integrate voice across the IoT market.

Together with the i.MX 6UltraLite, the i.MX 7Dual becomes NXP’s second i.MX applications processor to be qualified by Google to run Android Things at optimal performance. The i.MX 7Dual not only adds a second ARM® Cortex®-A7 core to enable higher overall performance, but also offers an integrated Cortex-M4 core for low-power heterogenous multicore processing.

In addition to these core processing improvements and support for the Google Assistant the following hardware and software features have been added: 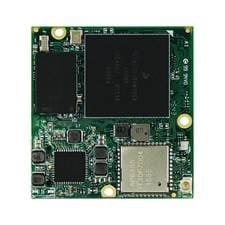 These new features are offered in the same small form factor SOM as the current Pico 6UL SOM and are sold with the same Pico base board as part of a low-cost development kit.

Robert Thompson is Global Director i.MX Ecosystem. He focuses on developing the ecosystem to enable customers to get to market as fast and competitively as possible. Robert is an industry expert in consumer electronics with over 20 years of experience in diverse regions, including Europe, Brazil and the US.