“One man’s trash is another man’s treasure,” as the old saying goes. That’s certainly the case for an enterprising group of Eindhoven students who made headlines recently by turning waste into wonder. With help from NXP, Eindhoven’s TU/ecomotive team created Luca, a sporty electric car from mostly recycled materials.

NXP is committed to the prevention of pollution and conservation of the earth’s natural resources and working to be an industry leader in reducing, reusing and recycling waste. So when we were approached by a team of students with a daring idea, the opportunity was too good to waste. Eindhoven’s TU/ecomotive team have just launched the result of their hard work; an eye-catching proof-of-concept car called Luca. It’s turning heads and corners on the road to true sustainability, with technology from NXP powering the wheels and more.

A Masterclass in Resource Repurposing

Lisa van Etten is Ecomotive’s Project Manager. “Luca was the result of the work of a team that first got together in February 2019 as part of the Technical University Eindhoven TU/ecomotive challenge,” explains Lisa. “Every year a TU/ecomotive team builds a car as a showcase for present-day problems or as a competition vehicle. We wanted to show that sustainability could be sexy.”

The result is a great-looking car with a sporty compact look and bright yellow finish (made from removable film, rather than paint, making the final recycling process much easier). Luca is a fully operational modern electric car that shows once and for all that sustainability can indeed be sexy. Luca’s body, finish, windows and interior are made from recycled materials, including PET bottles, hard ABS plastic and common household waste. Its base is made from flax and recycled plastic—much of which was recovered from the ocean. This is a true masterclass in extending the useful life of resources that are commonly seen as waste. 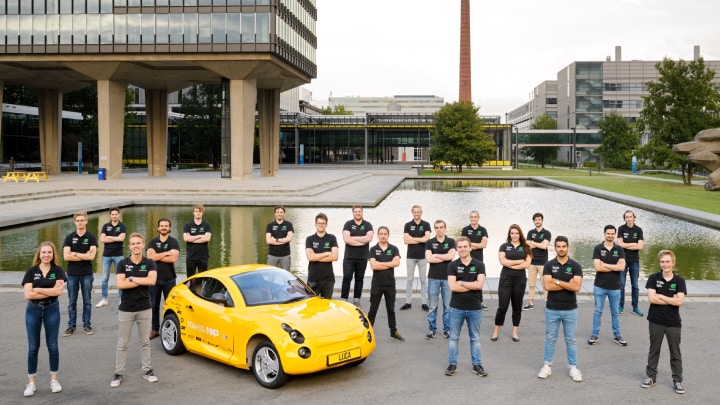 Technical Support From Pre-Build to Launch

The rear-wheel drive Luca is powered by two electric motors and is capable of reaching a top speed of 90 km/h (56 mph). Its lightweight body weighs in at just 360 kg, with a further 60 kg battery pack providing the energy for an action radius of 220 km, making this eco-conscious beauty an incredibly efficient vehicle too. Unveiled in an official ceremony in Eindhoven in October by Dutch ESA astronaut André Kuipers, it has captured the attention of international press and companies looking for new ideas on what to do with the 2.1 billon tons of waste generated worldwide per year.

So how did NXP help in the design and development process? “We were in touch with NXP from very early on to explore the problems we might face in the development process,” says Lisa. “We exchanged ideas and together selected components, including the LPC11C24 microcontroller, an ARM Cortex M0-based MCU with an on-chip, high-speed CAN transceiver. This is the beating heart of each of the car’s control units, and was packaged with its own physical controller area network (CAN), so this was a great choice for us. We also implemented a drowsiness detector, to monitor the driver for signs of tiredness. This was achieved through a driver-facing video feed, accelerated by a tensor processing unit, with the data processed by an i.MX 8M system-on-chip.”

NXP was involved on Luca’s electrical architecture from the early design phase, as Gino Knubben, NXP’s main technical contact on the project, explains. “We aligned with the Luca team on the MPU selection for the subsystems, ECUs and driver monitoring system,” he says, “and we gave hands-on advice on CAN-bus solutions, displays drivers and i.MX8 Coral Board, both hardware and software.”

NXP regularly works with academia across the world, offering students support on NXP technology, including access to our hardware, IC samples, software and tools. With Luca, working on something directly related to sustainability, echoes our own efforts and commitments to energy-saving, as Gino explains. “It was great to see how the Luca team looked at smart mobility from a different angle, addressing efficiency and re-use from the very beginning of the vehicle design. This is very much in line with NXP’s views and focus on energy efficiency, connected devices, security, safety and health. So we are delighted to support this team and to help them tell their wonderful story through our wide network of customers, partners, suppliers and employees.” 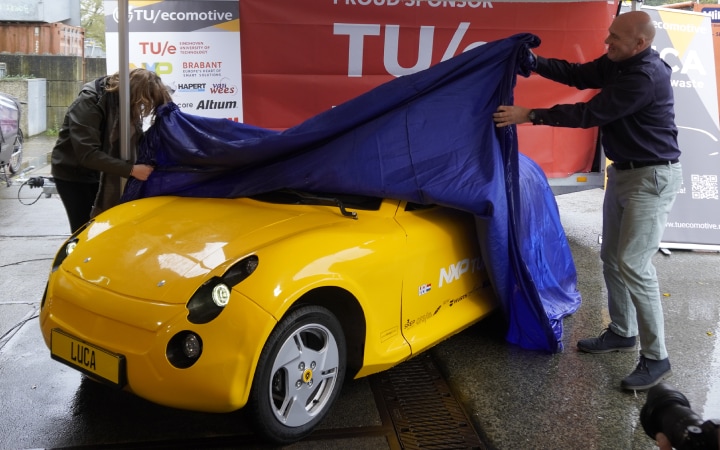 Take the Chance to Change

Gino also has some advice for young inventors looking to turn their ideas into reality. “Every new idea, even the smallest ones, can lead to big changes,” he says. “My advice is to build your network while you are studying, join a start-up and get in contact with companies like NXP, reach out and be proactive… or even better, come work with us!”

Check out this video of the Luca build and this gallery for more images of the launch event.

Freek van Vlerken is member of the NXP Impact team, which provides inspiring stories about NXP's technological and societal impact.