The TJA1020 is the interface between the LIN leader/follower protocol controller and the physical bus in a Local Interconnect Network (LIN). It is primarily intended for in-vehicle sub-networks using baud rates from 2.4 up to 20 Kbaud.

The transmit data stream of the protocol controller at the TXD input is converted by the LIN transceiver into a bus signal with controlled slew rate and wave shaping to minimize EME. The LIN bus output pin is pulled HIGH via an internal termination resistor. For a leader application an external resistor in series with a diode should be connected between pin INH or pin BAT and pin LIN. The receiver detects the data stream at the LIN bus input pin and transfers it via pin RXD to the microcontroller. 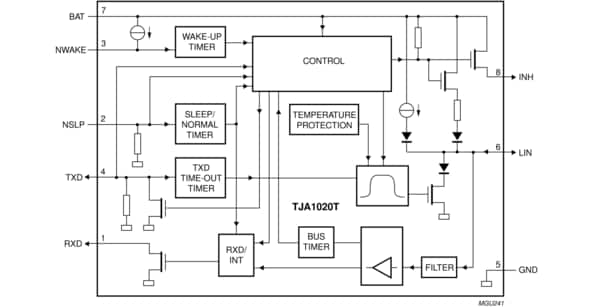