Get Started with the IMX6SLEVK 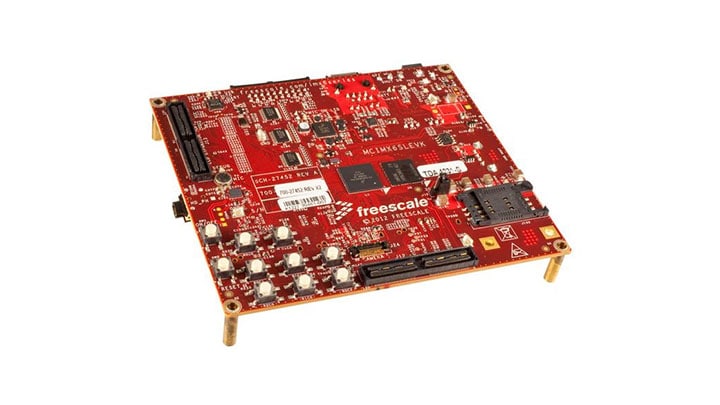 This page will help guide you through learning about the NXP Linux® OS BSP and i.MX6SL EVK.

1.1 Get Familiar with the Board 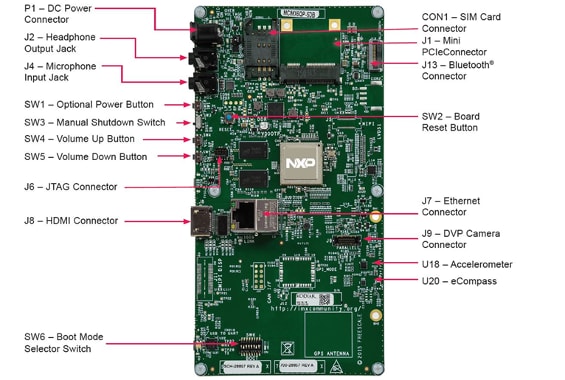 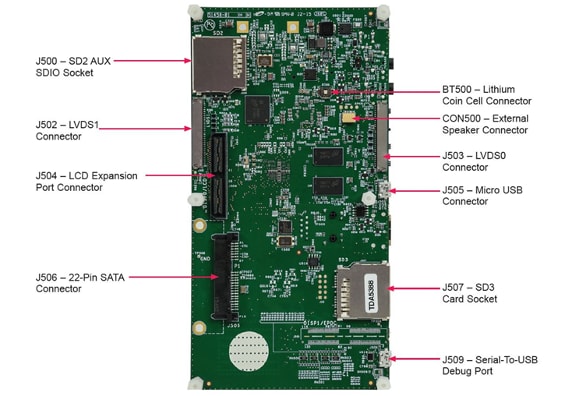 The kit comes with an SD card with a pre-built NXP Linux® BSP image. Without modifying the system, booting from the image will provide a default system with certain features for building other applications on top of Linux®.

Connect the micro-B end of the supplied USB cable into Debug UART port J509. Connect the other end of the cable to a host computer.

On Linux® host machine, run the following command to determine the port number:

Use the following command to install serial communication program:

To determine the port number of the i.MX board virtual COM port, open the device manager and look under the "Ports" group.

If needed, the serial-to-USB drivers can be found at ftdichip.com/FTDrivers.htm.

Not sure how to use a terminal application? Try one of these tutorials:

*Note: A micro B male to A female adapter cable may be needed.

Connect an Ethernet cable to the Ethernet jack J7.

When powered on, the processor starts executing code from on-chip ROM. With default Boot Switch setup, this code reads the fuses to find out which media to search for a bootable image. Then it will find the SD card and begin U-Boot execution automatically.

Information will be printed in the serial console. If you don't stop the U-boot process, it will boot the Linux® kernel.

1.8 Congratulations! Your Linux® is booted!

Once Linux® is booted, you can login with username root and no password.

To jump in U-Boot, press any key before the value of the U-Boot environment variable, "bootdelay", decreases and before it times out (default 3 seconds). If you stop the U-boot process, you can run the following command to boot Linux® again: 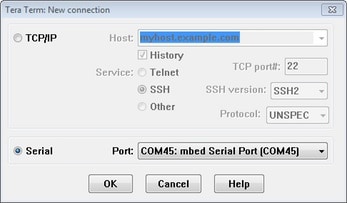 PuTTY is a popular terminal emulation application. This program can be used to display information sent from your NXP development platform's virtual serial port.

Before the Linux® OS kernel can boot on an i.MX board, the Linux® image needs to be copied to a boot device and the boot switches need to be set to boot that device.

To bring up the board and run Linux®, four elements are needed:

The release contains a pre-built SD card image that is built specifically for the i.MX 6Quad Sabre-SD board. The SD card image is a file that is typically named

The pre-built NXP Linux® Binary Demo Image provides a typical system and basic set of features for using and evaluating the processor. Without modifying the system, the users can evaluate hardware interfaces, test SoC features, and run user space applications.

With the source code and documentation, the users also can customize the Linux® image built for your own device, i.e. add or remove system components.

The Yocto Project is the framework of choice with NXP professional support to build the images that are used for booting a Linux® kernel, although other methods can be used.

There are various ways to download the Linux® BSP image for different boards, boot devices, and results desired.

For Getting-Started, we only list the few methods to transfer the BSP image to SD card.Experienced Linux® developer can explore other options.

The .sdcard image (either from a pre-built or self-built BSP image) is an SD card image that can be flashed directly. This is the simplest way to load everything needed onto the card with one command.

An SD/MMC card reader is required to transfer the bootloader and kernel images to initialize the partition table and copy the root file system.

The Linux® kernel running on the Linux® host assigns a device node to the SD/MMC card reader.

To identify the device node assigned to the SD/MMC card, carry out the following command in the host computer:

WARNING: The instructions below will permanently delete existing content on the SD card and are dangerous to your PC if run incorrectly. If you have question or would like further details please consult the i.MX Linux® User's Guide.

Carry out the following command to copy the SD card image to the SD/MMC card. Change sdx below to match the one used by the SD card.

WARNING: Make sure that the device node is correct for the SD/MMC card. Otherwise, it may damage your operating system or data on the hard disk of your computer.

The U-Boot bootloader is able to download images over Ethernet to RAM and then writes to an SD card. For this operation. Network communications need to be configured.

For instructions about how to download U-Boot to an MMC/SD card that is not the one used to boot from, please refer to section 4.4.1

Images can be downloaded to other boot media (memory storage device) using U-Boot.To use other memory device, please refer to sections under 4.4.1

The Manufacturing Tool, named MfgTool, is a tool that runs on a Windows OS host and is used to download images to different devices on an i.MX board. The tar.gz file can be found with the pre-built Linux® BSP image.

The boot modes of the i.MX boards are controlled by the boot configuration DIP switches on the board.

*: Switch needs to be configured for high or low depending on the application needs. Please check reference manual for boot configuration options.

For boot switch setup to boot from other device (SD3 and SATA), please refer to 4.5 in i.MX Linux® User Guide

This section walks through the booting process of the i.MX 6QuadPlus SABRE board with the Android™ system image and briefly introduce how to build the software components that create your own system image. For more information about building the Android™ platform, see source.android.com/source/building.html

Current releases of Demo Images and source code can be found on www.nxp.com/imx6tools

The images from the prebuilt release package or created from source code contain:

The images needed to create an Android™ system can either be obtained from the release package or be built from source.

The pre-built NXP Android™ demo image will provide a default system with certain features for purpose of evaluation. Without modifying the system, the users can perform some basic operations, and interact with the system to test hardware interfaces and develop software application in the user space.

The latest pre-built demo files can be found in Android™ section at www.nxp.com/imx6tools

To build the Android™ source files, use a computer running Linux® OS. Ubuntu 14.04 (64-bit) version is the most tested OS for the Android NXP BSP Release.

After installing the computer running Linux® OS, check whether you have all the necessary packages installed for an Android™ build. See "Setting up your machine" on the Android™ website source.android.com/source/initializing.html.

In addition to the packages requested on the Android™ website, please refer to Android™ User Guide to install the additional packages.

Get the source code

Get the Android™ source code from Google repo.

Get the kernel source code and U-Boot from Freescale open source git.

The build configuration command lunch can be issued with an argument

Here is an example to build the Android™ image with user type for the i.MX 6Quadplus SABRE Board:

When the make command is complete, the build-log.txt file contains the execution output. Check for any errors

The Linux® utility "dd" on the computer running Linux® OS can be used to download the images into the SD card.

Before downloading, ensure that your partitions are created as described in Storage partitions.

The Manufacturing Tool, named MfgTool, is a tool that runs on a Windows OS host and is used to download images to target devices on an i.MX board. The tar.gz file can be downloaded in Manufacturing Tools section at www.nxp.com/imx6tools

The boot modes of the i.MX boards are controlled by the boot configuration switches on the board.

To boot with HDMI displays, please refer to section 3.4 for more instructions.

You can connect a USB cable from the debug UART port to the computer and open a serial communication program for for console output.

You can connect a USB cable from the debug UART port to the computer and open a serial communication program for for console output.

With Linux® running on the i.MX platform, you can evaluate special features that i.MX SoCs provide:

There are three main power management techniques on i.MX boards:

NXP Yocto Project User's Guide covers how to set up the Linux® host machine, how to run and configure a Yocto Project, generate an image, and generate a rootfs

The HDCP2.X (High-bandwidth Digital Content Protection) function based on the Android™ Extended Wi-Fi Display Sink Release package is designed to create a secure connection between a source and a display by enabling:

The features described in the release notes are supported by NXP implemented media framework OMXPlayer. They are only available after applied android_L5.1.1_2.0.0-ga_omxplayer_source.tar.gz software package.

Only codecs that have no license restriction are included in OMXPlayer package.

To install the OMXPlayer package, perform the following steps:

The default boot mode configures the system to display the UI on the MCIMX28LCD (sold separately). To change the default configuration and enable the MCIMXHDMICARD daughte rcard (sold separately), hit any key to stop u-boot from proceeding. Once prompt is visible, the u-boot can be configured as follows:

For LCD boot up, type the following commands (as one line):

For HDMI boot up, type the following commands (as one line):

The default settings should be used and no change is needed.