The PCA9559 is a 20-pin CMOS device consisting of one 6-bit non-volatile EEPROM registers, 5 hardware pin inputs and a 5-bit multiplexed output with one latched EEPROM bit. It is used for DIP switch-free or jumper-less system configuration and supports Mobile and Desktop VID Configuration, where 2 preset values (1 set of internal non-volatile registers and 1 set of external hardware pins) set processor voltage for operation in either performance or deep sleep modes. The PCA9559 is also useful in server and telecom/networking applications when used to replace DIP switches or jumpers, since the settings can be easily changed via I²C/SMBus without having to power down the equipment to open the cabinet. The non-volatile memory retains the most current setting selected before the power is turned off.

The PCA9559 has 2 address pins allowing up to 4 devices to be placed on the same I²C-bus or SMBus. 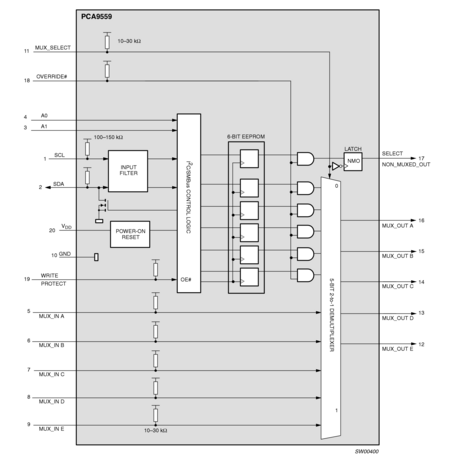